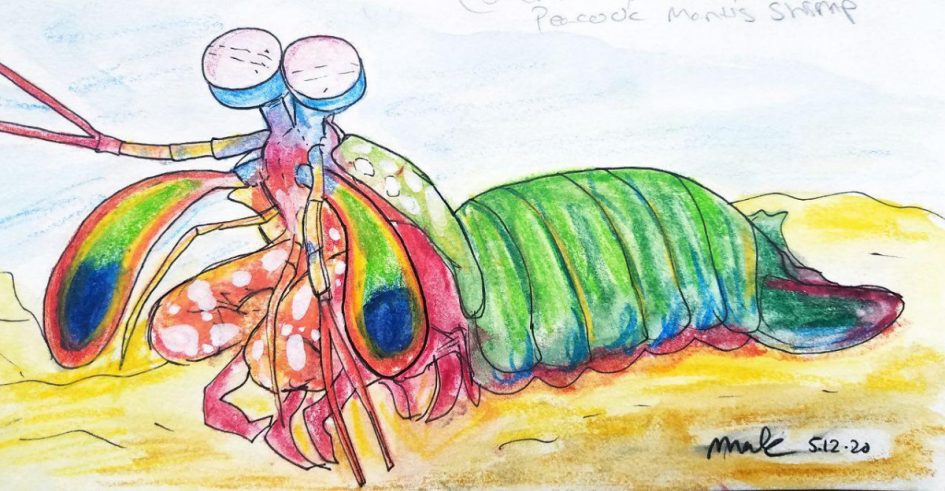 A vibrantly beautiful, and voracious visual predator, the peacock mantis shrimp (Odontdactylus scyllarus) strikes both fear and admiration into the hearts of those who may happen upon one. Appearing at first to be psychedelic lobsters equipped with boxing gloves, peacock mantis shrimp are only distantly related to more familiar crustaceans like lobsters, or crabs, and belong to a group called “Stomatopods.” In size, they tend to be 3-18 centimeters in length (Caldwell, 2005). Their geographic range extends from parts of the Indo-Pacific Ocean, south of Japan, north of Australia, and between eastern Africa and the island of Guam. Preferring warm and shallow waters, O. scyllarus can typically be found at depths of 10-30 meters, their ideal water temperature ranges 22-28°C. (Caldwell, 2005) These mantis shrimp are most commonly found at home in their U-shaped burrows, often built near the bases of coral reefs on sandy or gravelly areas. (Caldwell, 2005) Considered to be ecosystem engineers, O. scyllarus constantly create new burrows and abandon older ones, creating new habitats for other animals within coral reefs. (“Peacock mantis shrimp,” n.d.)

Peacock mantis shrimp are known to be highly territorial, with individuals using their powerful smashers to strike one another’s tails, for this reason, the telson (end of their tails) is the most heavily armored part of their bodies (Claverie et al, 2011). Keeping larger specimens of O. scyllarus in aquariums is often cautioned against, on account of their insatiable appetites for their tank-mates, and predilection for smashing through glass tanks. There are two classifications for raptorial appendages among mantis shrimp, “spearers,” and “smashers.” The spearing variety are known to be ambush predators, nabbing prey from just outside their burrows, whereas the smashers (like O. scyllarus) are considered foragers, tending to hunt farther away from their burrows (deVries, 2012). Dietarily, O. scyllarus is considered a generalist. Their diets consist of gastropods, bivalves, and other crustaceans.

The impressive strikes of O. scyllarus are powered by elastic forces, meaning that the farther they pull their raptorial appendages back, the stronger the strike; speeds of up to 20 meters per second have been recorded for a strike (Patek, 2007). Smashers are not only adept at swiftly terminating their prey, the speed at which they strike causes a phenomenon called “cavitation,” where an air bubble forms due to rapid pressure changes on the site impacted. Each of their strikes actually generates two blows, one from the impact of the limb itself, and one from the explosion of a cavitation bubble created from the initial impact. (Patek, 2007) When cavitation bubbles collapse, considerable energy is released in the form of heat, light, and sound. This is a way that mantis shrimp are able to amplify the power of their strikes without using more energy. In Patek’s study on O. scyllarus, she notes “on average, cavitation peak forces are 50% of the limb’s impact force, although cavitation forces may exceed the limb impact forces by up to 280%” (Patek, 2005) which is an amazing feat of biological engineering.

Regarding visual perception, O. scyllarus (among other Stomatopods) have a complex and diverse assortment of retinal photoreceptors. Peacock mantis shrimp possess the ability to perceive their underwater worlds with ultraviolet vision, spatial vision, color vision, and polarization vision, and can even switch between these modalities consciously (Caldwell, 2014). Each eye is up on a stalk, with a wide range of motion; providing a periscope-like view from which they can peer from their burrows (Cronin, 1994). Yet another unique characteristic: “Stomatopods are the only crustaceans known with saccadic eye movements” (Marshall, 2014) which means while tracking objects their eyes skip around rapidly, much like human eyes. However, the two eyes do not behave in unison as human eyes do. Each eye within itself is capable of not just stereoscopic vision, but trinocular vision. This makes O. scyllarus efficient at gauging depth and distance underwater, which is vital when delivering precision strikes to both enemies and prey. These amazing eyes also act somewhat as insurance, if they lose an eye doing battle with another mantis shrimp, they will still be capable of hunting with their remaining good eye without detracting from their ability to perceive depth. (Cronin, 1994)

On a usual day for a male peacock mantis shrimp, when the water is clear and enemies seem scarce, he surveys the ocean floor just outside his burrow. His two eyes do double duty, as they scan the surrounding environment independently of each other, making up a more comprehensive neural image between them. The brightly colored reef appears almost fluorescent, with variation among reds and violets more obvious. Deeming it safe to emerge, he scuttles along, and flashes his antennal scales and uropods, which under polarized filters, flash red and white signals. This bright signaling may communicate to other competing mantis shrimp to keep their distance or under other circumstances, attract mates. As he makes his way across the sea floor, scouting each crack and crevice in the rocks, the unmistakable shimmer of polarized light penetrates his field of vision. A rival male signals to back off and does not want trouble. Our brave male shrimp responds with a threatening display, showing no fear towards this comparatively diminutive male. He passes by his antagonist, unperturbed and without any further harassment.