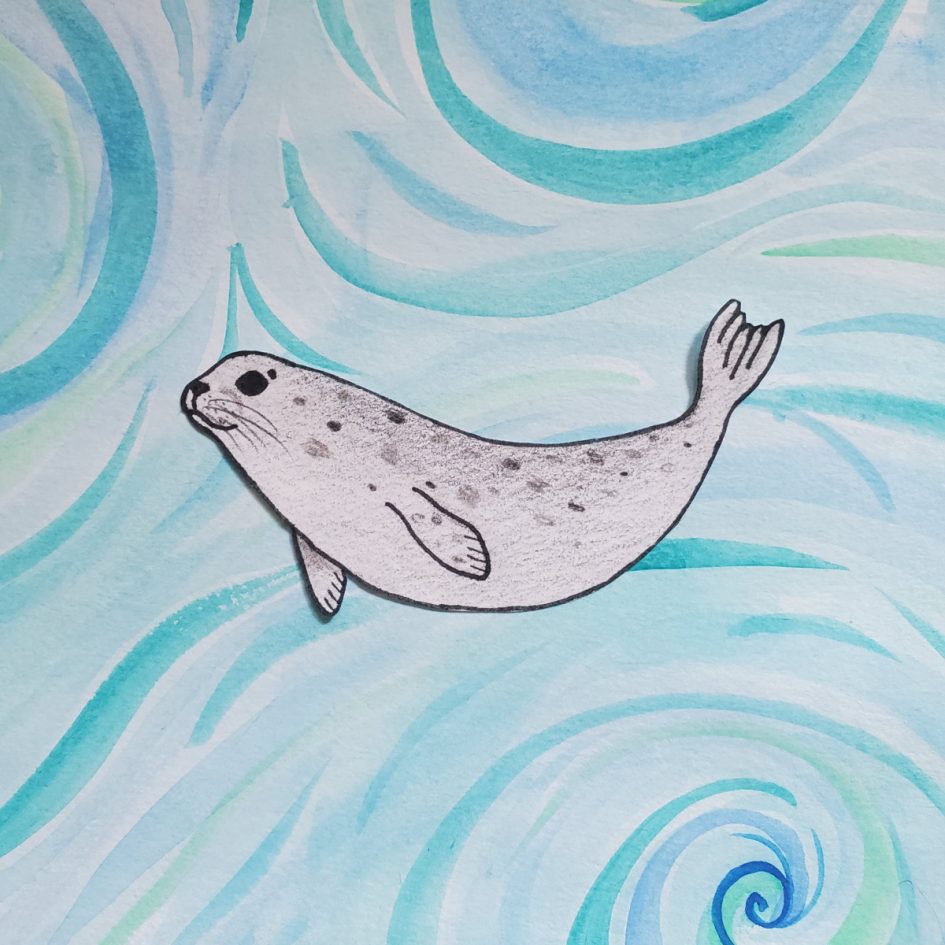 The Harbor Seal, also known as the Pacific harbor seal or common seal, is a partially amphibious marine mammal. It is found along coastlines, and in bays and inlets of the northern hemisphere. They can often be found hauled out on beaches, rocky coasts and outcroppings, log rafts, and piers. They typically haul out to rest, thermo-regulate, and give birth to their pups. Harbor seals usually pup in the summer time, after a 9 to 11 month gestation, with a delayed implantation period, which is common among marine mammals and allows the mother to pup at the ideal time and conditions. If you see a pup on a beach by itself, do not assume it is abandoned and approach it to “help”. Its mother is likely just out hunting, and left its young pup on land for its safety until it is a better swimmer. Approaching seals on land can prevent their mothers from feeling safe to return, and can stress the seal out greatly.

Harbor seals are phocids– earless seals, or “true seals”. This separates them from other pinnipeds, including sea lions and walruses. Unlike sea lions, they don’t have pinnae (external ear flaps), but instead just have ear holes, which are able to close when they dive. Another easy way to differentiate them is by their speckled coloring. Harbor seals have counter-shading as a form of camouflage. They have darker, spotted backs, and lighter undersides. They typically range from a light grey to almost black, though can have a taupe/brownish coloring as well. They are about 5-6 feet long, and weight about 120-160 lbs, so roughly the size of a person. Males tend to be a bit larger than females, but aren’t easily distinguished otherwise.

Seals use undulatory “caterpillar” type movements to get around on land on their bellies. In the water, they use a limited amount of undulatory swimming. Most of their propulsion comes from alternating and fanning their rear flippers. They are flexible, quick, and graceful in the water. They will often swim upside down, and it is suspected that they do this closer to the surface to see all of beneath them, and often swim right side up closer to the bottom to see all of the water column above them.

The imagined umwelt of the Pacific harbor seal is greatly affected by the adaptations of its senses, as well as the fact that it is technically an amphibious marine mammal. On land, seals have the ability to use all of their senses: smell, touch, eyesight, and hearing. They are also often warming in the sunlight, feeling warmth. They are also much more limited in their locomotion on land, and are quite slow and awkward. In the water, however, they are “in their element”. Although they can’t utilize their sense of smell, and their ear holes close, they do have different advantages. Their eyes are adapted to see in the water, but even more than that, they have fantastic touch sensations. So much so, that blind seals have been reported to have been successful in the wild, due to relying on their other sensors such as their sensitive whiskers. They are also quick, agile, and graceful. Their dive reflex also kicks in, causing their heartrates also drop drastically. Due to this, they are much more comfortable in the water, and therefore often more confident. When sensing any sort of danger while on land, they will generally enter the water as quickly as possible. In the water, however, harbor seals are often reported “playing” or otherwise curiously interacting with human divers