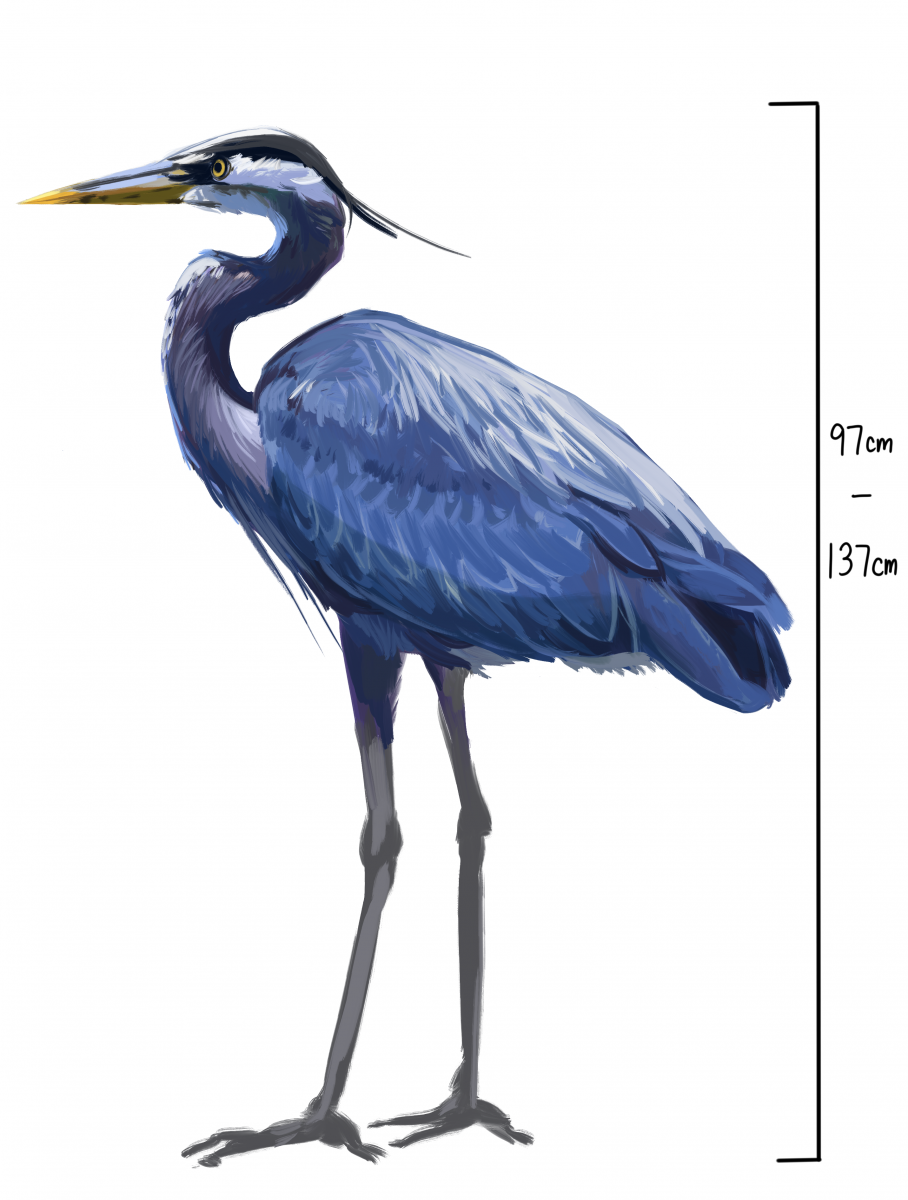 The Great Blue Heron, or Ardea herodias in the order Pelecaniformes, is a common sight across North America. The family it belongs to, Ardeidae, consists of herons, egrets, and bitterns (Youth, 2000). A. herodias is the largest North American heron, standing out with their long legs and S-shaped neck that it can pull closely to its body (Cornell Lab of Ornithology, 2019). Despite its large size, ranging from 97 cm to 137 cm with a wingspan of 65.8 cm to 79.1 cm, it weighs only about 5 to 6 pounds (Cornell Lab of Ornithology, 2019). One would expect that its conspicuous size would make it noticeable to prey, but it doesn’t seem to impair its ability to hunt small and quick animals due to its hunting technique of stalking prey and standing very still (Cornell Lab of Ornithology, 2019).

Despite the solitary nature of the Great Blue Heron while hunting, their nesting grounds are expansive and close-knit. These colonies, otherwise known as “heronries”, can have as many as 500 or more nests within them (Cornell Lab of Ornithology, 2019). Heronries can be built 100 or feet more off the ground with more than one nest per tree (Cornell Lab of Ornithology, 2019). They build their nests a distance away from their hunting grounds in isolated areas to avoid predators such as raccoons, snakes, hawks, owls, and eagles (Youth, 2000). Great Blue Herons stay with the same mate until the next mating season, in which they perform a courtship display that involves a greeting and an offering of nest-building materials (Cornell Lab of Ornithology, 2019). Males will gather twigs and sticks to offer to females, sometimes even going as far as stealing from other males (Forbes, 1982).

Great Blue Herons are partially migrant, moving south from their northmost breeding range in Canada during the winter. Their widespread distribution and territorial behavior makes them useful for study as a bioindicator. Although they try to stay away from human activity, they have a high risk of exposure to bioaccumulative contaminants (Seston et al, 2009). If their nesting sites are disturbed by humans or predators, they may be abandoned entirely, leading to a loss for the colony (Forbes, 1982). Their tolerance of humans is dependent on their location; herons in urban areas are more tolerant to disturbance than herons that live in isolation (Forbes, 1982). When a heron is disturbed in its territory, it’s very clear— it’ll squawk at the intruder, throwing back its head and flapping its wings as a warning (Cornell Lab of Ornithology, 2019). While Great Blue Herons may be social creatures in private, they’d rather be hidden within a flock of other animals… as long as no gulls or seabirds come too close.

A. herodias preys on a large range of animals; it will eat anything that it can strike and swallow. They may eat fish, reptiles, amphibians, insects, small mammals, and birds depending on their location and prey availability (Cornell Lab of Ornithology, 2019). Their flexible opportunist diet explains why they can survive in locations that don’t have large bodies of water such as beaches or rivers (Cornell Lab of Ornithology, 2019). Great Blue Herons, as well as other herons in its family, are typically spotted hunting alone (Youth, 2000). Hunting “alone” doesn’t necessarily mean alone, because it may be spotted among other animals, such as ducks and seagulls (Youth, 2000). The number of rods in their eyes improve their night-vision, allowing them to hunt at night if needed (Cornell Lab of Ornithology, 2019).

To survive, you need sustenance. To get sustenance, you need to use your time and energy well while hunting. It doesn’t matter what it is—if it can fit in your beak and won’t choke you on the way down, it’s fair game. Waiting for a fish to come by takes more energy than it may look. Staying entirely still, you have to keep your eyes on the blur in the water to know when to attack. If your food can’t see you, it might swim right into your range. Striking the water in the right spot, right in front of fish that’s about to swim by, is crucial. A subtle shadow past the surface of the water, or maybe an odd reflection below the surface of the water, may just be your next meal. At the end of the day, your kids will be able to eat a bit of whatever you caught. Staying out for so long gets a bit lonely, but it’s better this way. It’s easier to blend in with your territory if you stay out of the way, and it’s less lonely when there’s locals to hide amongst. Just use your wings if they get in your way, and they’ll get the picture.

Cornell Lab of Ornithology. (2019). Great Blue Heron. Retrieved from https://www.allaboutbirds.org/guide/Great_Blue_Heron/ This page by Cornell has introductory information about A. herodias. I used it to learn about their range, identification, and behavior within their life history stages. It also has audio clips of heron sounds and images of the bird in multiple life stages.

Millbrook School. (2020). Great Blue Heron FAQ. Retrieved from https://www.millbrook.org/animals/trevor-zoo-live/trevor-zoo-live—herons/great-blue-heron-faqs. This page, run by Millbrook School in NY, is an FAQ that answers questions about a Great Blue Heron cam they have set up in 2014. I used some of the information about nesting and feeding methods.

Seston, R. M., Zwiernik, M. J., Fredricks, T. B., Coefield, S. J., Tazelaar, D. L., Hamman, D. W., Paulson, J. D., & Giesy, J. P. (2009). Utilizing the great blue heron ( Ardea herodias) in ecological risk assessments of bioaccumulative contaminants. Environmental Monitoring & Assessment, 157(1–4), 199–210. https://doi-org.evergreen.idm.oclc.org/10.1007/s10661-008-0528-7 This article discusses the potential and handling of A. herodias in the assessment of bioaccumulative compounds. Three rookeries were observed for 2 years for productivity and nestling exposure, and eggs/nestling plasma were obtained to sample contaminant exposure. I used the premise of this paper to understand how this species of heron has studied in the past, and how humans may have tampered with their habitats.