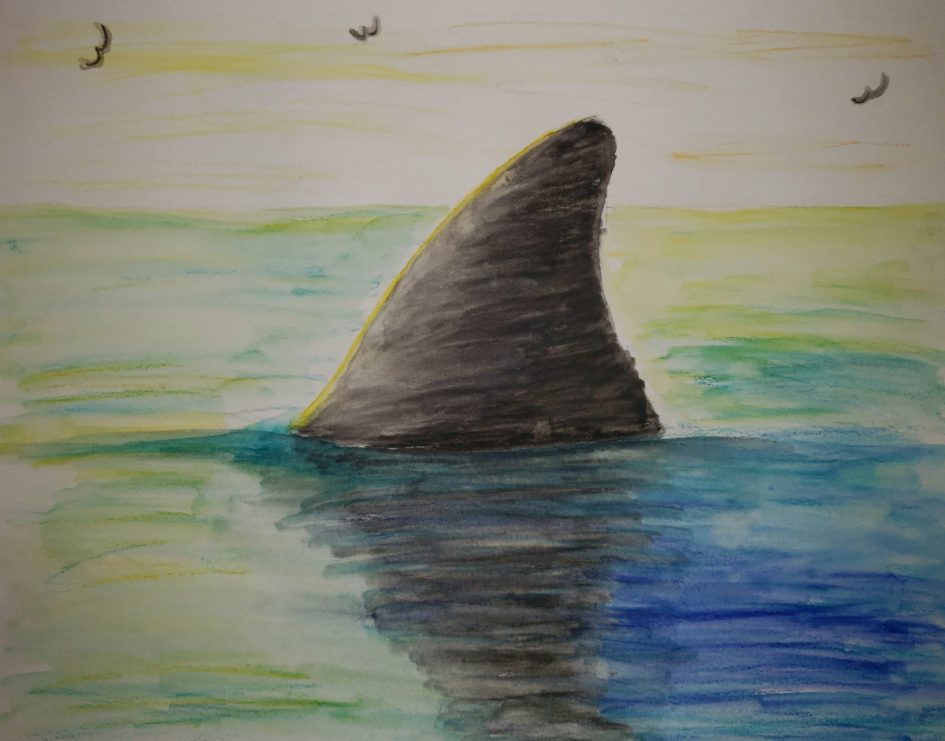 The Great White Shark (Carcharodon carcharias) is considered one of the top predatory fish in the ocean.  They can grow to lengths of up to 6.5m and weigh as much as 2250kg.  White sharks are primarily found in the cooler waters of the Pacific and Atlantic oceans, though because of their long migration patterns, may also be found in other oceans of the world (Great White Sharks: Carcharodon carcharias, 2020).  These amazing animals are apex predators with an array of tools to help them be effective hunters.  Though there is much that we still do not know about Great White behavior, much of what we do know has come from observing them in areas where they hunt for food.  White Sharks spend much of their time hunting in the shallow waters around coastlines and islands.  Areas with high concentrations of their primary food source, seals, and sea lions.   As they patrol from below, White Sharks employ the use of vision, camouflage, and power, to ambush their prey at the surface.  They use speed and the element of surprise to stun and wound their target.  It is this burst of speed that makes these sharks so effective.

One aspect that helps with this is its shape.  The Great White’s taxonomy is Kingdom: Animalia, Order: Lamniformes (mackerel sharks), Family: Lamnidae (White shark, Short and Long fin Mako, and Salmon shark), and Genus: Carcharodon.   White sharks are in the family of Lamnids or “stiff bodied swimmers” that includes tuna.  They have thick bodies and a long torpedo shape that is designed for straight ahead speed.  Its cylindrical fusiform body, tapered cone shaped head, and stiff hydrofoil type tail allow the shark to move effortlessly in water, conserving energy as it hunts.  (Martin, 2020)

A White shark has powerful muscles that help propel it forward.  White sharks can produce speeds up to 25mph in short bursts.  This is thanks to a proportionally large amount of white muscle fibers.  Sharks have two types of muscle fibers, white and red.  Red muscle fibers have a high oxygen content and are primarily used for aerobic movement.  This aerobic movement allows for long steady swimming.  White muscle fibers have low oxygen content and are primarily used for anaerobic movement.  These muscle fibers are effective at producing short bursts of power, but because of its low oxygen content, white muscle builds up lactic acid quickly and cannot sustain for long periods.  White shark muscle is comprised of over 90% white muscle fiber, giving them the ability to accelerate quickly while hunting.  Also, much of the red muscle fiber that White Sharks have is located deep along the thickest part of the body near the dorsal fin.  Having the red muscle this far forward rather than at the tail is what gives the shark its unique swimming style.  This efficient swimming technique means that a white shark can cruise and conserve its energy while waiting for the next meal opportunity. (Douglas Syme, 2011)

The unique design and specialized shape of Great Whites moves the locomotion muscles central to the body which maximizes lateral motion.  This swimming style called “thunniform” swimming generates power through the caudal fin rather than whole body undulation.  This swimming form is shared between lamnid sharks and tuna.  For thunniform swimmers there is a compromise, between having an efficient swimming style and powerful burst of speed, and a decrease in maneuverability.  White sharks compensate for this by spreading out the red muscle fibers over a longer portion of the torso.  This provides for greater flexibility than other lamnids.  This may be of great benefit when hunting animals like seals and sea lions as they are incredibly flexible and able to turn rapidly. (Douglas Syme, 2011)

There are a number of documentary films that have captured the Great White as it hunts for seals.  They have observed that by using its strong visual acuity, the White shark patrols from below while searching for the outline of a seal backlit from above at the surface.  Its energy efficient movement allows it  to hunt using minimal effort until it spots its prey.  Attacking from below and behind, the White shark uses its powerful propulsion to explode toward the surface.  It launches itself at the seal, projecting itself out of the water, using impact and a strong bite to wound its prey.  It then circles around to finish the job.  It is a highly effective hunting strategy.

When you take all of these assets and put them together, it makes the Great White shark a formidable predator.  Add to this a massive row of razor-sharp teeth and dark cold eyes, and it is no wonder that the White shark has had so much bad press over the years.  From films like Jaws, episodes of Shark Week, to real life accounts of shark attacks, Great Whites have been labeled man-eaters.  This unfortunate misunderstanding has led to fear and killing of these amazing animals.  Due to a myriad of human factors such as fin hunting, sport fishing, accidental net entanglements, and other factors, Great white sharks are currently listed as a vulnerable species (Great White Sharks: Carcharodon carcharias, 2020).

Today, scientists are working hard to dispel many of these myths, but it is extremely difficult.  Giving the Great White a media makeover will take many years, and ultimately it may never happen.  Killer shark movies are being made every year and shows like “Top 72 deadliest animals” will continue to get attention and skew fact from myth.  It is ok to fear a thing, but can we fear something and still value it for what it is?  The Great White is an apex predator in our oceans and plays a vital role in it.  Its survival will be reliant on how effective we are at changing these perceptions. 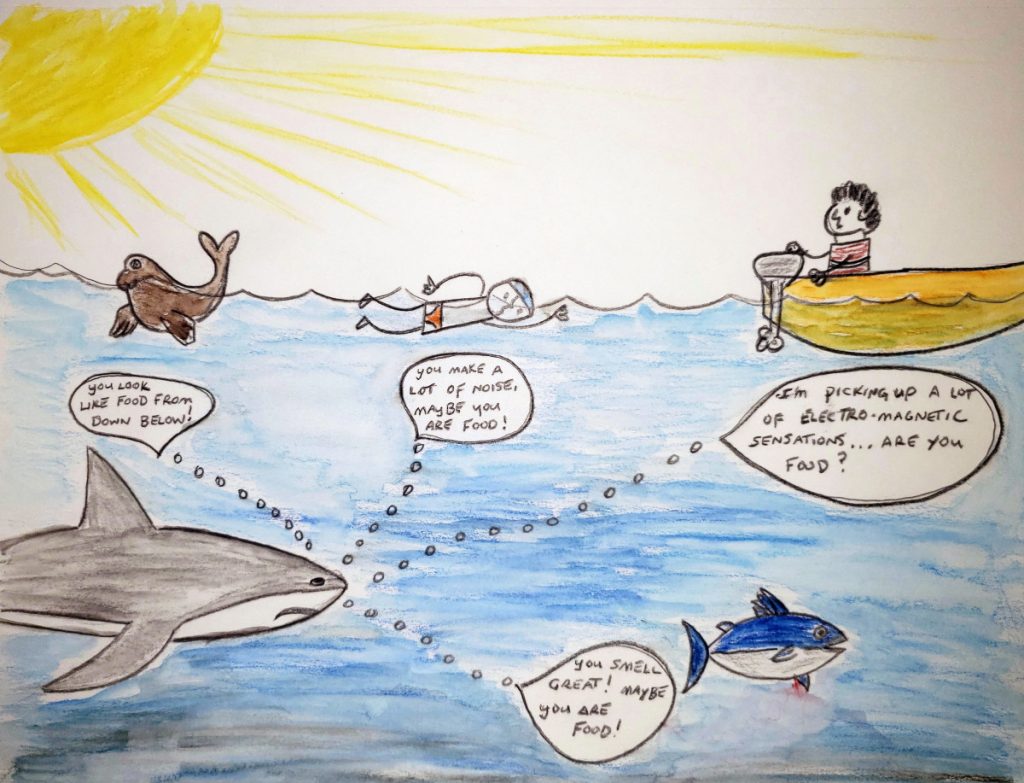 I’m really really hungry.  It’s been several days since my last meal.  I can feel the water getting colder so I will probably start heading south soon.  One last bit of food would really make the journey more comfortable.  If I meet a lady along the way, I’ll have more energy to try and mate.  There is something at the surface that looks appetizing.  I hope it has lots of fat.  I remember when I came upon a dead whale last year.  Man, that was a meal!  I was stuffed for a week!  Ok, one last burst of energy and I’ll have this little morsel for lunch.  Uuuugghhhhhh…that was such a waste of time.  It wasn’t even edible.  Just a hard brittle seal shaped thing at the surface.  It looked like a seal…weird.