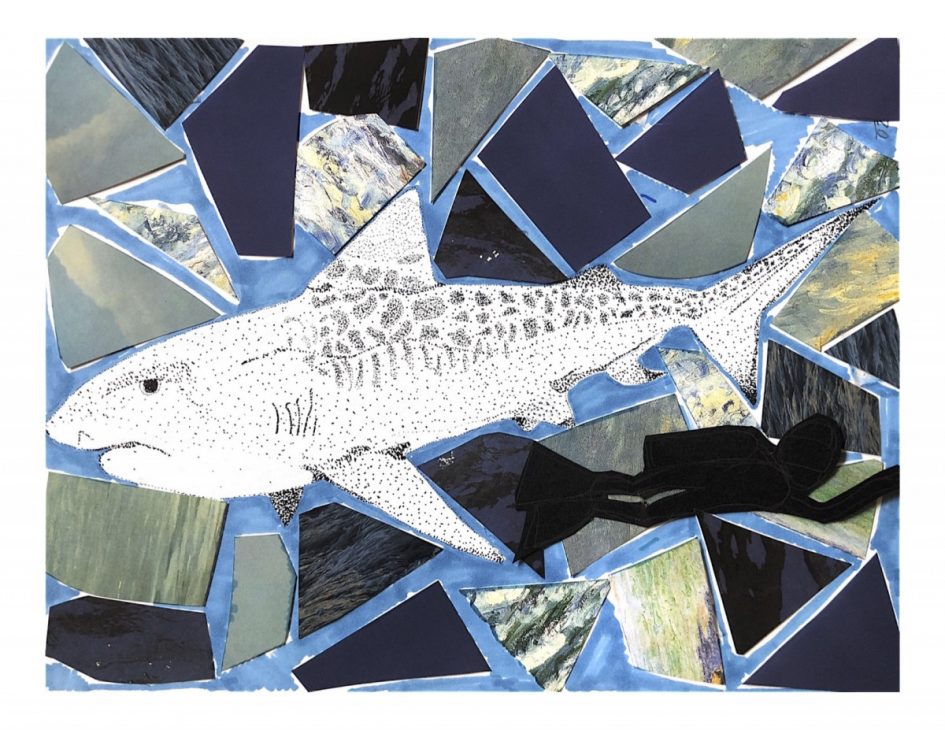 When I say “shark”, what comes to mind? The ocean, I’m sure, but also the various media that has been created surrounding sharks or shark attacks. Jaws, Sharknado, & Soul Surfer are just a few films that come to mind when I think of shark media. Of course the connotations created for these creatures are sinister. As if sharks are something to actively fear when that simply shouldn’t be the case. Sharks are a complex group of marine creatures that are in danger & need our help to conserve what sharks are left. Today, I ask you to strip down what you think you know about sharks & open your mind to the wonderful underwater life of tiger sharks.

Perhaps the best way to start building your newfound knowledge is by learning the characteristics of the tiger shark (Galeocerdo cuvier). Tiger sharks are named as such for the stripes it possesses as a pup, however, these marks fade with age. Tiger sharks are generally massive. Females range from 10-14 ft while the males linger at a measly 8-10 ft. They’re sleek with gray skin on the tops of their body & a white underbelly. Most sharks have this white underbelly to camouflage their bodies with the sky above when other marine creatures are below them (Oldham, Cydni). Tiger sharks are a part of the Carcharhiniformes order, meaning ground sharks in simpler terms. They are in the Carcharhinidae family making them a requiem shark. All ground sharks have two eyes, five gills, two dorsal fins, and an anal fin (ITIS Standard Report Page).

The physical makeup of the tiger shark is extremely important to its locomotion. The dorsal fin of the shark is used as a pivot point that allows the body of the animal to move in an S-like motion. The pelvic & pectoral fins located on the sides of the body aid with buoyancy & can change the altitude of the shark with a simple raise or lower. Shark skin is very important to locomotion as it is tightly connected to the muscles of the shark. While the muscles contract, the skin is stretched over the   muscles allowing the shark to gain energy in the skin. Once the muscles are released, so is the energy within the skin thus propelling the shark through the water with the movement of the tail (Wainwright, S. A., et al).

Tiger sharks typically live in tropical areas where coral reefs fade into open water. They’re known for coming into shallow waters as well. They’ll eat just about anything & are infamous for taking bites out of license plates, bicycles, and anything else they can get their jaws around (Oldham, Cydni). As apex predators, tiger sharks keep the ocean clean. They eat the sick & dead which allows for not only healthy oceans but also healthy species. Without these predators at the top of the food chain, the entire system underneath it will crumble as well (Verlecar, X. N., et al). However, this predatory behavior has created a bad connotation around tiger sharks. Soul Surfer is a good example of the prejudice against tiger sharks. Bethany Hamilton was attacked by a tiger shark while surfing & lost her arm due to the incident. The people in her community decided to go out and hunt the shark that attacked Bethany. They were successful in catching the shark in question. Stories like these, whether fiction or nonfiction, create a stigma around sharks that needs to be broken down.

Tiger sharks are overfished for their fins, skin, and liver. They are a near endangered species. Shark fins are very expensive ($116+/kg), and the demand is very high. Finning has raised 400% in the past 50+ years. At this rate, they will likely be killed faster than they can reproduce. A female tiger shark must be 6-8 ft long before she can start reproducing, and when she can have pups, she will only have a few in her lifetime. It is also very hard to keep track of the number of sharks/species still living in the wild. Most shark fisheries do not categorize their fishes by species, but instead by size and/or price. No one is keeping a set record of how many sharks are being slaughtered and what kind of sharks they even are. This issue is creating huge gaps in our knowledge of shark endangerment. However, this biological gap is being closed with DNA identification processes that were discovered in 2007 (Verlecar, X. N., et al).

People are so scared of these beautiful creatures that they don’t see their importance to the ocean’s ecosystem. With education & proper training, shark attacks on humans can become even more limited than they already are. Humans are not sharks’ preferred meal. There is a way to be able to combat attacks in non-lethal ways. The film Saving Jaws (2019) follows Ocean Ramsey (the “shark whisperer”) and her efforts to promote shark conservation. She trains divers to safely swim uncaged with sharks. Asserting yourself as a strong powerful animal in the water will make the sharks respect you. Keeping yourself calm around tiger sharks & all other species is the only way to assert your power in their domain. Remember that when you go in the ocean, you’re entering someone else’s home.

Your massive tail glides swiftly through the water cutting the liquid as it sways. You’re hungry & looking for your next meal when you’re suddenly tangled in a mess of nets. You’re panicked knowing the stories that your mom told you, but your thrashing tangles you more. You can’t believe it happened to you of all sharks. You think of how pure the ocean would be without human interaction. There is water without plastics or oil: the coral reefs bloom in color again. For a moment in this jumbled mess of net, you find the peace that you’ve been praying for; for humans to get out of the water. Yet, just when you think all hope is lost, there is a human. She’s lightly touching your back with gentle strokes of sincere concern. She swims around you with something glistening in her hand. You watch as the net opens with the slide of her hand. She looks you in the eye & you stare back. Only moments before you were cursing the existence of all humans, but now you’ve been saved by one. You suppose the only way for there to be true peace is for you to work with them like this human did. There is still hope.

Fear of the Net

Writing, illustration, and animation all created by Mary Claire Willis