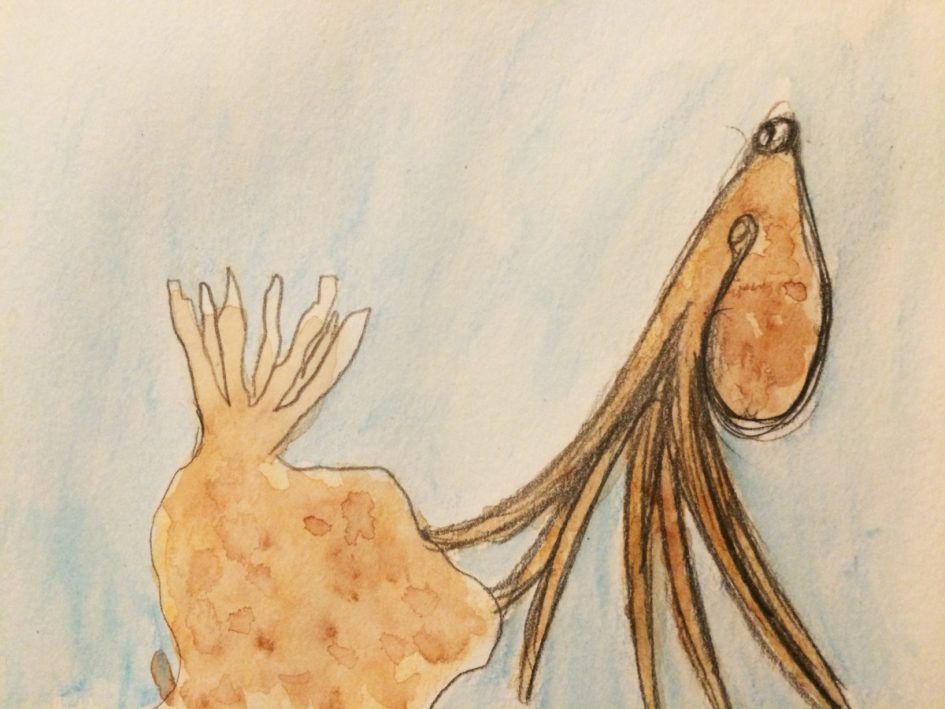 There are several key things that are fascinating about how octopuses see the world. Their eyes do not have corneas, relying on other features to protect and hold the iris in place. Despite being notorious for being able to change colors and blend in with their environments so clearly they even mimic textures, their eyes have one cone and are therefore color blind and rely instead on photosensitivity in their skin to detect how to adjust themselves to these environments. They possess an intimate closeness to and mastery of color, yet they see none of it and instead experience the colors around them in nonvisual ways.

Image one shows the physical structure of an octopus eye as explained by W. S. Jagger and P. J. Sands. As can be seen, it is mostly spherical consisting of an iris, lens and retina. The iris can go from completely round when at its largest to a narrow horizontal slit when at its smallest. The lens is made of two spherical halves, the anterior(front) and posterior(back). The retina, which in humans consists of three cones capable of seeing red, blue and green light, of an octopus only has one cone which has led most scientists to believe them, and other cephalopods, to be color blind. There is also, notably, a collar in place of a cornea. This collar protects the eye and holds down the edges of the iris, it’s composed of a suspensory ligament. This collar also helps work as a circular aperture stop, focusing the light onto the lens. Jagger and Sands also say “The octopus eye is not rigid but depends upon internal pressure to maintain its shape.”

The exact way octopuses see color is still debated between two possibilities. The shape of their eyes may allow light waves to reach the retina without passing through the lens, allowing them to receive color in the light waves even if they aren’t actually seen. There have also been ospins, a light-sensitive protein found in the retina that carries different photosensitive pigments, found throughout the skin of most cephalopods including octopuses. These ospins are found at the surface of the skin, attached to the nervous system of the octopus, and much like the retina in the eye when light hits these sensors they then send signals to the brain informing it of the color of the environment. Extraocular photoreceptors, or non-visual photoreceptors, like ospins are not responsible for image construction, a level of light interpretation that is hard to imagine. Image two shows an octopus grabbing a surface as it changes color to match, a technique they often implement to hide in their surroundings. When watching videos of octopuses changing color, unless the change is mood oriented, like when fighting or mating, you may notice that they touch a surface before beginning to mimique it.

My animation is from the perspective of an octopus, depicting the way they may see the world. Their eyes interpret things as black and white, so the majority of the imagery after they open their eyes will be monochromatic. But they have been shown to have a detailed grasp of texture when mimicking it. As the octopus crawls along the seafloor, going from hiding place to hiding place, colors occasionally splash into existence from what its tentacles touch, the color flowing up what can be seen of the arms. Their notorious curiosity is depicted in how the octopus explores its environment, changing colors as it goes, as well as their normal moving behavior as they quickly move from secure location to secure location.

In this animation I tried to capture what the world truly looked like from the octopus’ perspective. Their eyes do not physically see color, yet their skin can differentiate the varied types of light waves. To me this sounds like synesthesia, where the senses get crossed and someone can see shapes or colors when sound is heard or taste things when a letter is read. Color is a physical sensation for octopuses more so than a visible one. It is something they don’t see when they look at the world, but instead something they experience through their skin by both sensing the colors and then changing to match them. Octopuses would likely describe color as a texture, something felt instead of seen. Since red is such a prominent and powerful color, I imagined it would feel rough. Blue, not only a cool color but also the one surrounding octopuses as water, should be smoother and more gentle as it changes. Green was given a more repetitive texture, like would grain, not perfectly even but directional.

Octopuses are very unique creatures. Eight legged, extremely intelligent, both color blind and color sensitive as they change to masterful disguise themselves. These creatures spend their lives in an underwater world vastly different from our own, and they experience it in such a unique way.