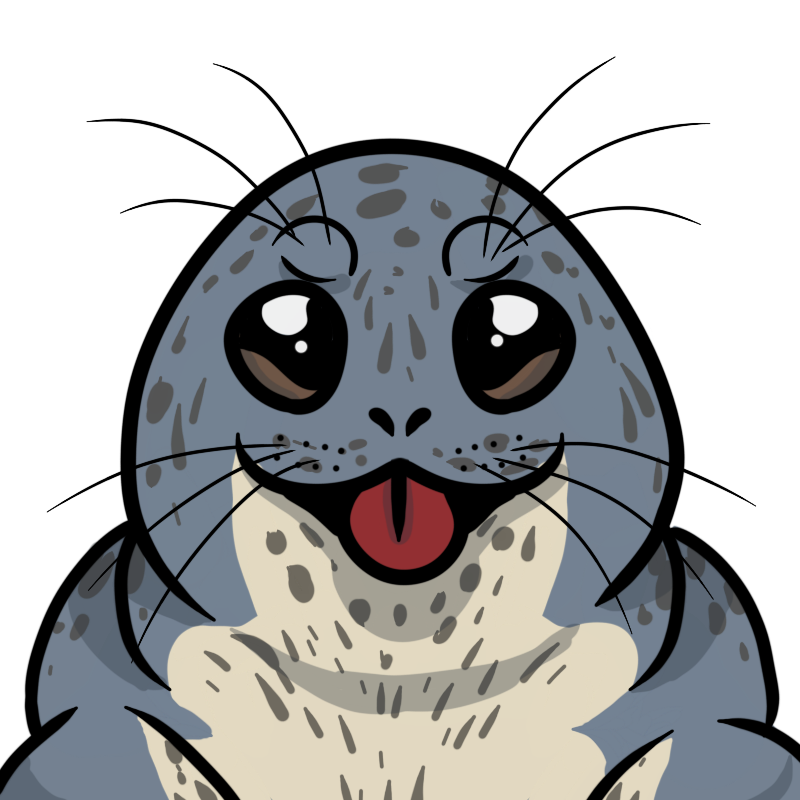 The harbor seal’s scientific name is  phoca vitulina, which means “calf-like seal”, this most likely being due to their neotenic appearance; namely, they have huge eyes for seeing in the dark, and cute, dog-like faces. They belong to the order Pinnipedia, which also includes sea lions and walruses, and they are earless, making them true seals (this is a distinction usually made to differentiate some seals from sea lions). They consume mostly shellfish, crustaceans, and fish such as salmon. According to a study done by Kenady Wilson and Alejandro Acevedo-Gutierrez of Western Washington University, harbor seals switch dominant prey often, most likely due to migratory seasons for certain fish, fluctuations in prey numbers, or other such movements. This could mean that harbor seals have a very low chance of overhunting their prey. Harbor seals are protected by the Marine Mammal Protection act, but still they remain one of the most frequent visitors to multiple wildlife rehabilitation centers…Most of their threats are of human origin, such as entanglement. When tangled in fishing gear, which is most common, they can drown, or carry it around for so long that it becomes fatigued, which compromises feeding ability and reproductive success. In other words, this can lead to death and reduced numbers in the long term. Chemical contaminants and boat collisions are some more heavy killers of these shallow water seals.

The Harbor seal is unique amongst most other true seals in the fact that adult harbor seals are almost always solitary when foraging, but on land they congregate into small, loosely organized groups. Harbor seals “haul out”, or leave the water temporarily, to thermoregulate, mate, or rest. In this state, on land, they are often at their most gregarious…During the summer in the Pacific Southwest, around May-June, their groups have repeatedly been reported to be quite large, reaching numbers well into the hundreds. In the winter, however, they barely reach double-digits. According to The University of Notre Dame’s The American Midland Naturalist, in some other southernmost areas (namely, the Nisqually River Flats in Washington and the surrounding areas in the southern Puget Sound), they group in non-changing numbers despite the season. Harbor seals are found quite plentifully in Washington state, and they are almost never seen too far from shore. They habitually haul out into mouths of bays or rocks; they prefer places where it would be at least semi-impossible for a predator to sneak up on them from the land side; Harbor seals are agile in the water but move rather slow on land…Thus, they frequent sandbars, rocks with water surrounding them on all sides, and anything floating in the water big enough for a seal to crawl onto. The seal painted above is enjoying a stone rising from the shallow estuaries of the Puget Sound.

Harbor seals love to swim, and spend half of their lives in the water. They can flip, turn, and dive hundreds of meters below the surface of the ocean! When their face is submerged, their “diving reflex” kicks in: Their heartbeat slows down, and they automatically hold their breath. Underwater, they can hold their breath for 25 minutes, hear around 14 times better than they can on land, and their large eyes, protected by oils, can even see through dark, murky waters. When their eyes fail, their whiskers come in handy, extending forward to touch unfamiliar objects and feel their way around extremely low light situations. Their nose does too; harbor seals have a great sense of smell, and a mother seal can track her pup by scent. In fact, according to some biologists at the Vancouver Aquarium, blind seal pups have been known to thrive in the wild; their other senses make up for it! Harbor seals look quite clumsy on land, and they’re a little slow, but not quite as bumbling as you might think. They can propel themselves off of cliffs and even stand up on their hind flippers for a short amount of time! They make their way across surfaces by way of a “galumphing” motion, undulating their body to scoot themselves towards the water. Underwater, they are faster. To swim, they use their fore flippers quite passively, and propel themselves by twitching their lower region and moving their hind flippers separately but with coordination. This makes them look slightly like a fish with two tail fins! At times, these flippers will deliver power strokes, clapping together to give an extra boost.

My prey’s tentacles wrap around my nose as I keep it held in my sharp teeth, preventing its escape…My whiskers twitch as they are overstimulated by its grip. I lash my jaw to drive it deeper into my mouth, and I am finally able to swallow it semi-whole. With a flick of my hind flippers I’m off again, tilting myself up towards light, and the tops of the kelp plants. The water is dark but I can see, and I avoid the rocks as I make my way up, one last graceful swim before I sleep…The cold air is colder than the freezing water as I breach and take a long-awaited breath. I’m tired. I often witness my cousins upside-down on the waves, their slumbering breaths creating steam in the frigid Alaskan air. I find myself thinking about that once again as I heave myself onto land, sharp rocks dull against my blubber, expending much effort to undulate my body to move inland under the cover of the rocky overhang. I can hear the lapping of the waves against those huge floating structures from here; they smell sharp, and strange as always. I’m too close, although I’ve slept here before and it has been fine. As I untense my body from an alert position and flop over, I find myself looking forward to the future. When the air grows warmer, and I congregate with my brethren on the retreating ice floes…There, I will give birth to pups and raise them for a short amount of time. I can recall some darker times, where those huge, sharp-smelling floating structures crowded us in and displaced us from our ice. We spent so much time in the winter waters then, and we were often separated from our pups…They all ended up dead, that year, by way of freezing. I fall asleep hoping next time is different.