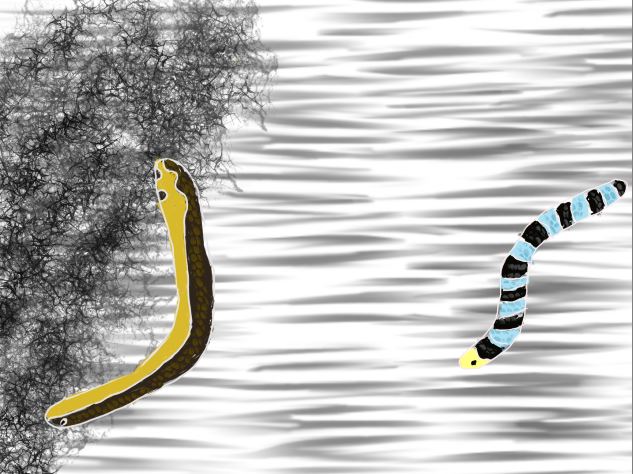 This paper is going to discuss habitat and life differences between the yellow-bellied sea snake and the banded sea krait. These two species are types of marine aquatic snakes that live in warmer waters, mostly in the Indo-Pacific. The yellow-bellied sea snake is what is known as a true sea snake as it does not leave the sea willingly while the sea krait is semiaquatic, spending a great amount of time on land. These sea snakes are both greatly adapted to their respective habitats and hunting styles.

Yellow-bellied sea snakes (Pelamis platurus) are adapted to live in drift lines and hunt within their borders. They lack belly scales leading them to dislike being on land because they lack underside protection but also lack a body suited to terrestrial travel. The yellow-bellied sea snake’s flattened oar-like tail makes it challenging to move on land but thrive within the large open ocean (Central America: Deadly dozen, 2008).  Their body shape helps them swim and dive in open water.

These snakes often float waiting for opportunities for a meal to swim by them. The yellow-bellied sea snake uses its flattened oar-like tail to create propulsion and speed for hunting. Yellow-bellied sea snakes sit and wait for food, usually smaller fish, to come into their general area before using their tails and rapidly propelling forward and latching onto their prey and envenomating their prey.

Banded sea kraits or yellow-lipped sea kraits (Laticauda colubrina) are semiaquatic marine animals that spend about half their lives on land and half in the water. These sea kraits are usually found in coral reefs hunting for eels and other smalls animals that live in the nooks and crannies of the reef. Banded sea kraits are slower moving swimmers as they have belly scales and have flatter bodies with a paddle-like tail that allows them to be able to live both in and out of the water. In the water they swim faster than they crawl on land; males swim, on average, 4.7 times faster than crawling on land while females swim, on average, 4.8 times faster than crawling (Shine and Shetty, 2001). Their swimming abilities are much better than their ability to crawl which is why they mostly hunt in the water rather than on land.

Banded sea kraits are known to mostly hunt solitarily but have been seen hunting in groups and have co-species hunting with goatfish and/or bluefin trevally (Brownlow, 2006). These sea kraits are perfectly adapted to be both on land and in the water though they do thrive better in the sea than on land. After they eat their fill, they leave the water and go onto land and find a safe place to digest their food.

This animation is created to show the differences in habitat between the yellow-bellied sea snake and the banded sea krait. This animation is used to be educational but fun in order to teach about some of the basic differences between these two species in order to help people gain an interest in learning more about them and keeping their environments safe and healthy. The yellow-bellied sea snake is not endangered but should still be respected and should be protected. The banded sea krait is not technically endangered but has less habitat compared to the yellow-bellied sea snake which means they need to be protected more. This animation is meant to be telling the story of two different species just stating their differences and seeing that one is not better than the other but unique in their own beautiful ways.

As a sea snake, I find myself disliking humans as I normally only come into contact with them when I get caught in their fishing nets/lines which is painful and disorienting to me. I find myself disliking being anywhere near land even if I could crawl on land and not be uncomfortable because there would be humans there that would try to pick me up and disorient me and possibly hurt me because I am a snake. I do not often envenomate people when I bit but I still do not want to get picked up and touched.

All images and animation copyright by Ashley Scott 2020