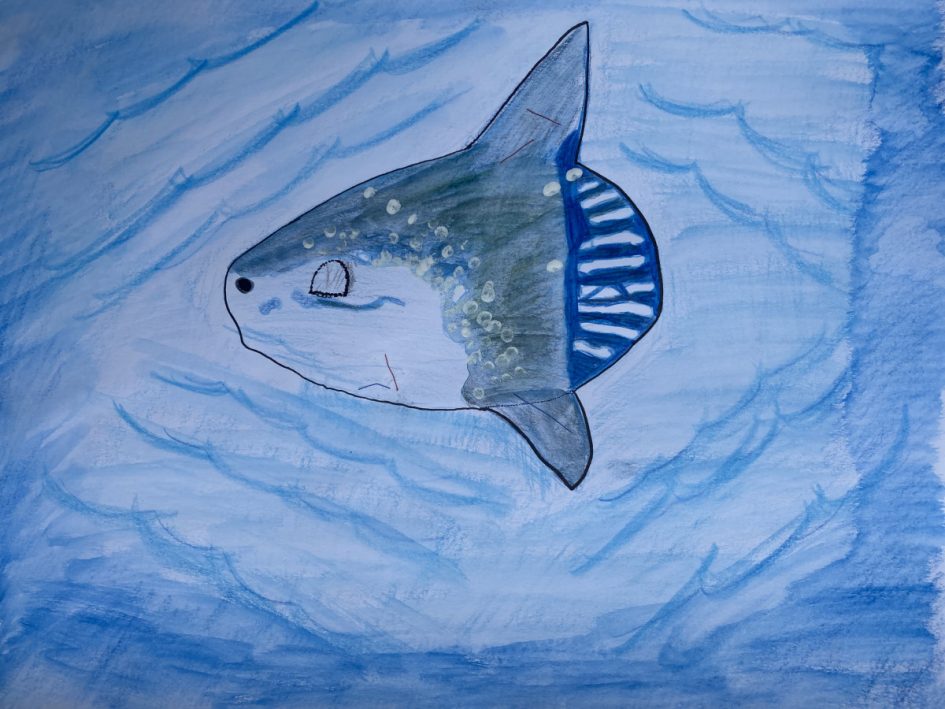 The Ocean Sunfish is one of our oceans’ heaviest and laziest fish! Weighing in at over 2,000 pounds, these giant cousins of the pufferfish can often be found sunbathing at the surface of the water providing shelter or a snack to a passerby in need.

The Mola Mola is the largest of all the known bony fish. Related to other fishes in the Molidae family they asise from the order tetraodontiform. Although classified as a bony fish much of the organism’s endoskeleton is made out of cartilage. One strange characteristic of the sunfish is their absence of a caudal fin.  One unique characteristic to the ocean sunfish is quite similar to other fishes in the tetraodontiform order, occurs during their two distinct transitions during its larval stage into adulthood. The first of these two transition starts in the larval and juvenile stages of the ocean sunfish, described by author Hailin Pan, “…resembles a miniature pufferfish possessing large pectoral fins, a tail fin and body spines; and the second is a highly transformed stage during which the tail is completely absorbed”, (Pan). All of these major morphological changes must occur by the time the mola mola is 15 months old and has reached adult size.

One fascinating aspect about the ocean sunfish is its ability to reach such a large size so quickly. “A captive sunfish gained approximately 400 kg in just 15 months with an average growth rate of 0.82 kg/day” (Pan). Growing up quickly is essential for survival in the ocean biome, the larger you are, fewer are the things that are able to eat you. In this study Pan conducts the location of the genes responsible for the fast growth rate in this species. “We examined genes involved in the growth pathway and found several fast-evolving genes and genes containing positively selected sites in the GH/IGF1 axis” (Pan). After this stage it is estimated that a sunfish can live 20-25 years however, this is not backed up by much scientific research. “A growth curve derived from repeated measurements of captive specimens estimated an individual with a total length of 3 m would be about 20 years old” (Pope). This can help us identify and give an estimate a possible age for wild sunfishes, which can be useful to note when researching the organism. As far as reproduction cycles go very few studies have been conducted but it’s been found that their spawning period is estimated between August and October. In their lives females contain, “an estimated 300 million eggs” (Pope).  It’s also noted that females tend to be larger than males.

This illustration shows a mola mola in the larval stage (at 1.5 mm in length) where it shows similarities to other fish within the order, tetraodontiform. This stage of life occurs directly after hatching, they resemble a puffer fish and look almost cartoon like with massive eyes and tiny bodies.

When looking at the sunfish the first words to come to mind usually aren’t, fast, powerful or even that great of swimmers. Lacking a caudal fin, many wouldn’t think they can really do much besides sunbathing near the ocean’s surface. But, thanks to accelerometer technology we are now able to find out how they move in the open ocean. “Lateral acceleration oscillated regularly, showing that the fish stroked their dorsal and anal fins from side-to-side” (Watanabe). This is where most of the muscle movement is happing on the fish and what us crucial in propelling them forward in the open ocean. “This suggests that thrust generated by the two fins during a stroke cycle are equal, because lift produced by a wing is proportional to the area of the wing” (Watanabe). Here the author of this study describes how the lift-based propulsion works. The author then goes on to debunk some flimflam spread among the scientific community, contrary to what many believe this study is able to highlight the fast swimming nature hidden within the mola mola. Although the sample size remained small it’s clear that the sunfish has the ability to do some powerful swimming especially when escaping things that do prey on them such as large marine mammals, sharks, and occasionally humans.

Lucky for the mola mola they can be found in many, many places. They have been found swimming in the Atlantic, Pacific, and Indian ocean. The diet of the sunfish consists of large to small fish, jellies, and even crustaceans making life suitable worldwide. The Mola Mola is also covered in parasites which come in handy in the long run. These parasites help establish symbiotic relationships among parasite eating birds and fish. All of these organisms end up benefitting off of each other making life suitable for all involved.

The Umwelt of the Sunfish lies in its playful, and almost dumb behaviors. This fish enjoys sunbathing and gliding through the ocean where it is likely to catch a parasite or two that tags along for the ride until it’s picked off by another marine organism. The Ocean Sunfish gets so large that few predators can actually prey on them. The Mola mola moves through life only able to comprehend what is in front of its face. Making use of the world around them sunfishes live alongside other fish, birds, and parasites that help them live longer happier lives.