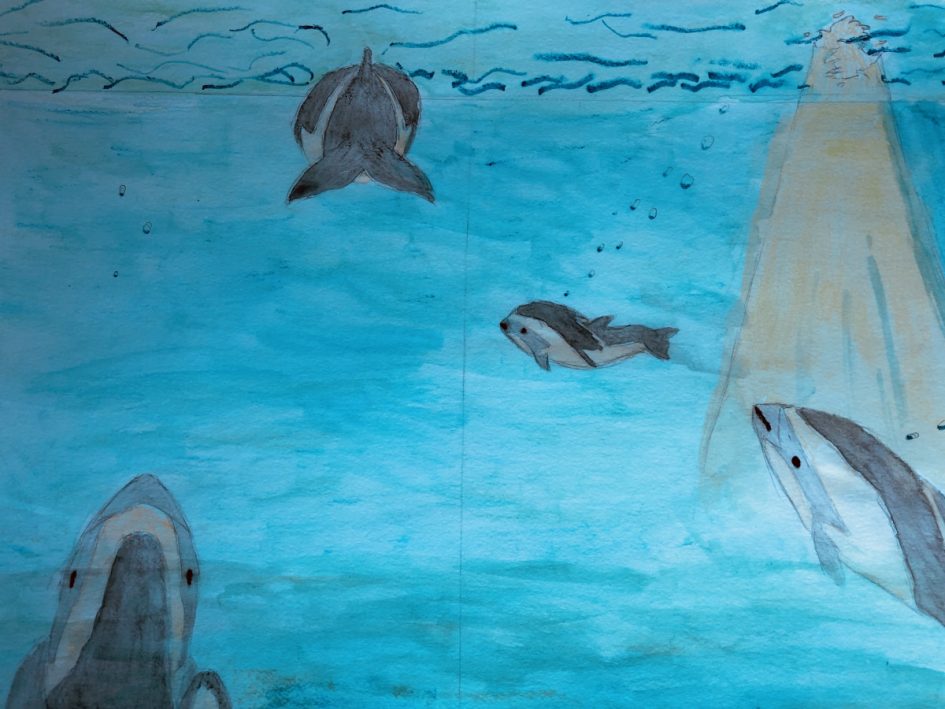 The surface light is out and the above is calm.  The push and pull are there, but not strong, easy enough for a young to swim without too much effort from its birther.  Shallows are a good half-light swim away, though not necessary just yet.  The pod ate a while ago and no need to get more just yet.  Click-click-whistle swam at the front, staying deeper where it was cooler and no shifting above to get in the way of hearing.  Click-whistle-whistle was sending off clicks, either looking for danger or another pod.  Hopefully there were no large-straight tops, especially with the young in the pod.  Whistle-click-click was behind.  No doubt it’ll soon be time for eye rest.  This is a good time for it, given that the above is calm and there seems to be no danger yet.  Ah, yes, the birthers seem to agree, slowly pushing the young to the above, with the young already having an eye closed.  Eye rest while the surface light is out is nice, the heat warming the dark while being able to look for dangers easily.  One eye slides closed, blocking out half the pod, but still able to see Click-click-whistle swimming towards the above, lowly keening.  It’ll do them well to get some eye rest, if only to clear their head of bubbles.

Lagenohynchus obscurus or the dusky dolphin is a member of the Delphinidae family, alongside others like the bottlenose dolphin, the wright whale and the orca.  The Lagenohynchus genus was first described in 1846 by Dr. John Edward Gray, with characteristics such as a short beak and a high, sickle-like dorsal fin (Wursig, 2009, p. 5).  As of 2008, there are six known species in the genus, which are found in both the Northern and Southern Pacific, as well as both the Northern Atlantic and Indian Oceans.  As for the dusky dolphin itself, there are four recognized sub species, each with a region of their own, off the southern shores of Africa, Australia, New Zealand and South America.

The dusky dolphin averages out to be 160 cm (5ft, 2in), though the subspecies found of Peru is noted to be larger than the others.  There is also little differences between the sexes.  Duskies have a short beak and the sickle dorsal fin characteristic of their genus.  Like majority of dolphins, duskies have a countershading coloration, with a mostly black top as well as a black tail and fluke with a pale grey underbelly.  There is also a light grey stripe going from their beak to their pectoral fins, covering the eye.

Dusky dolphins are well known for their aerial behavior, like many other dolphins are.  However, unlike Spinner dolphins, which are known for their spins, dusky dolphins instead are known for their head over tail leaps.  As the name suggests, the dolphin will gain a lot of speed only to leap up out of the water and procede to flip head over tail, amounting to what humans would consider a backflip, which is the most acrobatic of their displays.  In a study of dusky dolphins off the coast of Argintina, it was found that dusky dolphins tend to display these kinds of behavior when participating in surface feeding as a way to herd and confine prey (Wursig, 1980, p. 871).  It should be noted that calves do not start doing acrobatic leaps, instead starting with noisy leaps that make a lot of noise upon reentry, before going into clean leaps and then coordinating leaps with other podmates (Deutsch, 2014).