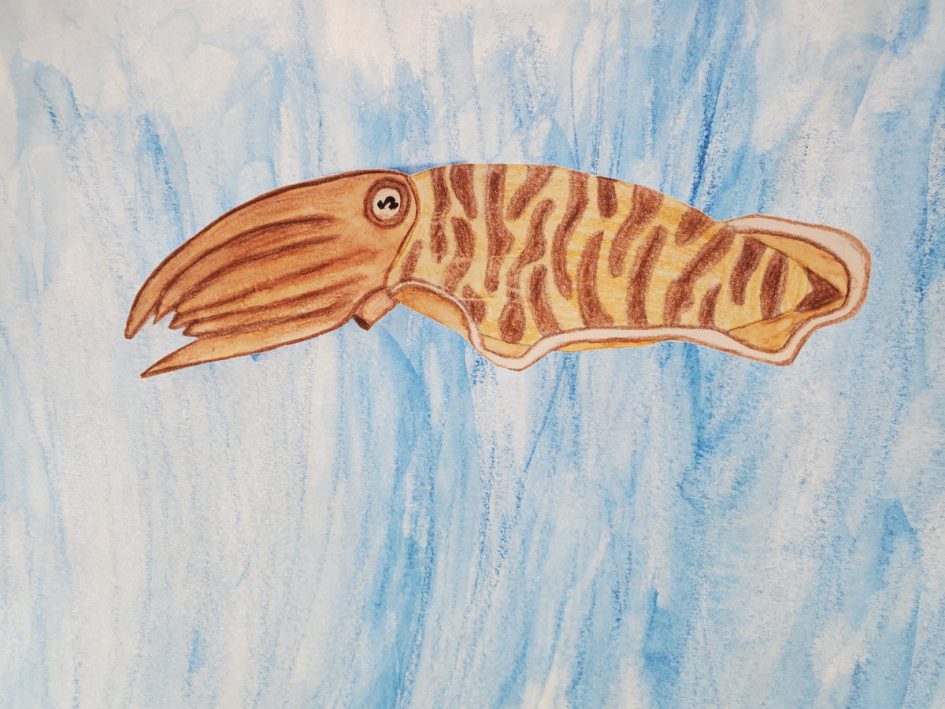 The Common Cuttlefish (Sepia Officinalis) is a part of the class Cephalopoda, order Mollusca making it a Cephalopoda Mollusca.[1]. The class Cephalopods are considered to be a part of the order Mollusks, so they have the same general characteristics. Characteristics include a muscular foot or neck, eight or more arms that are attached to the mantel, chitinous beak, and eyes that can form images [2]. Mollusks are the other order that consist of both terrestrial and marine species. The Common Cuttlefish are found in the sublittoral marine depths of the Mediterranean, Baltic Seas, and along the coast of South Africa [1]. Like many Cephalopods, the cuttlefish uses various ways of communication to form relationships with their species using different types of signals [3]. These signals are categorized as postural, locomotion, textural, chromatic, inking, and photophores [3].

In general, the Common Cuttlefish uses an abundance of movements. These movements consist of short rotations, saccades, thrust, slip, and yaw [4]. The Common Cuttlefish can be buoyant through regulating fluid to air ratio in its cuttlebone [5]. The cuttlefish also has a siphon and fins that are used for different purposes. The siphon is used when the cuttlefish needs to make a quick escape or pounce on prey. The fins are used as a way to move slowly, allowing the cuttlefish to hover [4 & 5].

The fins on a Common Cuttlefish are defined as a paired fin locomotion. It is given this definition because of the fins being all paired together by a universal joint at the base of each fin ray [5]. The fins are stabilizers that can move the cuttlefish at slower speeds, provide extra thrust, and allows it to hover. The movement is done through a rhythmic undulatory pattern that the cuttlefish can have full control over due to a particular type of muscle. These specific muscles are made from a three-dimensional array of muscles called the muscular hydrostat [5].

For my umwelt, I will be depicting these organisms by displaying human emotions on them. It will not be until the end of the animation that these emotions show. The squid will be covered in the sand, waiting for its next meal. Using the sketchbook paper, markers, and the watercolor pencils, I will make a sandy bottom for the squid to bury in. The cuttlefish will come into the picture swimming around. I will depict this by having a backdrop of the ocean. The cuttlefish finds a beautiful place to possibly look for some food and head towards the area where the squid is located, not knowing the squid is there. Once the cuttlefish approaches, the squid is startled by the cuttlefish and uses a squirt of ink to scare off the cuttlefish as the squid makes a quick getaway. The cuttlefish, instead of being scared by the ink, is confused and is happy with finding a new empty spot of sand. I will show this happiness by having the cuttlefish arms curl up into a smile like a form and dancing around a bit.