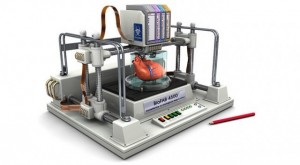 In my first iteration of my Blue Rabbit 3D printing Idea I posed the question, what is the potential of 3D printing in the healthcare industry, and how will it revolutionize the medical field? This was one of the many questions that first inspired me and seized my attention when I began delving into the Making Meaning Matter 3D printing program. After all the material we have been covering in class in convergence with my own research I am convinced that humanity is on the brink of a continuous revolution, a material, technological, and hopefully conscious and sustainable revolution. The potential of “3D printing” and being able to have what is in your mind on the table in front of you is so exciting I get goose bumps thinking about it! The medical industry is massive, and for good reason after all, in this life what is more important that your health right? Everyone wants to be healthy and happy, no one wants to be sick, no one wants to get old and watch their bodies decay and die. Over the last thousand, even hundreds of years, we have made massive strides in longevity and quality of life through “medicine” and “healthcare”. The amount of preventative measures, cures, and operations that are discovered or invented every year is astonishing.

I expect 3D printing to eventually impact almost every industry in the coming downloadable material revolution, especially those reliant on technology, kind of like I don’t know… the internet? For this reason, and because I grew up with a strong mother figure deeply iembeddedin the healthcare industry through education and work, I am intoxicated with curiosity, fear, and anticipation about what the future has in store involving 3D printing and scanning and its ability to help people as a whole, AKA humanity. In the documentary we watched in class, the Netflix original “Print the Legend” one of the Makerbot ex-employee/founders says something like, people aren’t printing out new kidneys and installing them in in their kitchen, today. But with technology exploding at its current rate I honestly believe that 3D printing bioengineered organs or machines that are capable of doing automatic surgeries is conceivable within my lifetime. One journal I found online titled “How 3-D Printing is Transforming Everything from Medicine to Manufacturing” says that 3D printers are

A New Tool In the Classroom—And the Factory

A former K–8 teacher in ­Seattle, Bri Pettis wants to put a printer in every K–12 school in the U.S. “When I was growing up,” he says, “there was an Apple IIe in the classroom, and if you were a nerd, you were taking it apart. That was probably the most important part of the education—it had nothing to do with what was on the test that day.”

“By far the most exciting ways in which 3-D printing is being used are in the medical field. Across the U.S., research teams have been making rapid progress in 3-D-printing a bewildering array of human body parts: ear cartilage and muscle tissue; skin, skulls, and bones; organs large and small.” 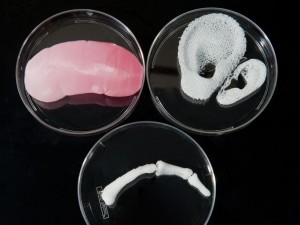 The article also goes into detail about how customization is huge, telling the story of a young girl who has a 3D designed and printed robotic hand that was created for a fraction of what it would cost to buy a standard prosthesis which run upwards of $60,000. And most of the parts can be made on a machine that costs about $1,500 as opposed to its counterpart industrial stereolithography 3D layering or “printing” machines that have been around since the 1980s for $150,000. So you tell me, how long till everyone has one in their home? Almost everyone I know has a computer in their pocket, and during my parents lifetime computers were the size of refrigerators and the internet was in its infancy. 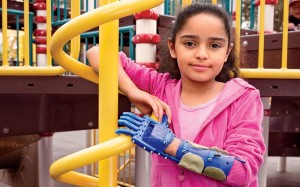 With these ideas and concepts I eagerly began seeking out recent resources both scholarly and journalistic in nature regarding what professionals are doing today with these forms of technology regarding logistics, ethics, and practice. In my first iteration I talked about journals I found online, one regarding an article, titled “3D printed heart saves baby’s life as medical technology leaps ahead “which told the story of a 2-week-old baby who required a complicated heart surgery because the babies heart had holes and the chambers were in an unusual formation like a maze. These issues were due to CHD (Congenital Heart Defects), which is a common defect of the structure of the heart present at birth. Using MRI scan data Morgan Stanley Children Hospital in New York City 3D printed a copy of the child’s heart to act as a sort of practice pad or road-map. This 3D “blue-print” printed heart allowed for the opportunity to study the riddled, structurally unusual organ, and develop a detailed strategy for the complicated and dangerous surgery. I found another article regarding 3D printing technology in the medical field which described a 3D printed titanium spinal invertebrate replacement that was porous so natural bone could grow through it over time.

Continuing forward with my research on JSTOR and EBSCO (digital library of academic journals, books, and primary sources) I found an article published through Proceedings of the National Academy of Sciences of the United States of America titled “X-Ray Microscopy in 3D” which talks about conventional tomography, simply put getting an image in slices, just like Makerware does with our STL files when it slices the 3D model layer by layer into the build path the extruder will take. The standard X-ray picture is a shadowgraph. It shows that somewhere in the object a certain amount of energy was removed from the X-ray beam, but it doesn’t tell at what depth in the object the removal took place. Medical doctors have been able to use the ordinary X-ray pictures because more often than not their previous knowledge of anatomy allows them to tell which structures inside the body were imaged by the shadows; they already know the depth in the body at which, for example, the spine or the ribs usually lie. But for an object about which there is no previous knowledge such reconstructive reasoning doesn’t apply In general, the lack of depth information severely limits the information. Medical people were happy to see the development of X-ray tomography, which gives three-dimensional information about the structures inside a body, this article goes into detail about

“Now a group of scientists has taken tomography into the microscopic range, developing what they consider a threedimensional form of X-ray microscopy. The technique is called X-ray microtomography.”

But human anatomy is three-dimensional and complex. Anatomy varies among different individuals, and acquiring knowledge of these differences is of great importance in medical treatment, as iterated in the article about the 3D “road map” printed heart. Doctors would build up a 3D mental picture of the anatomical structure after assimilating a set of 2D CT images in their head, this process sounds abstract and not easy or exact. Computer software is now available to rebuild 3D images from these cross-sectional images. Until recently the quality of these images has been poor because of technological limitations and slow scanning speeds, early CT scanners can only provide limited numbers of relatively thick slives, resulting in low resolution 3D images and taking a heavy toll on computing power. This article goes into detail about

“New Developments in CT and Computer Technology. A technological breakthrough occurred recently with the introduction of a new generation of CT scanners called multi detector CT. This new generation of CT scanners employs state-of-the-art technology and uses multiple rows of detectors to provide fast, powerful and efficient scanning. A large volume of data covering a wide range of the body can be acquired in less than 20 seconds. The time needed is well within a single held breath, thus avoiding motion artifacts.”

My own Blue Rabbit has evolved into me customizing a model of my own anatomy, using relatively cheap technology and free versions of software I am taking a 3D model scan of my hand with an x-box Kinect plugged into a lab top running Skanect, importing it into blender to smooth it out and save it as an STL file. Then I am going to tinker with it and try to 3D model what I think my bone structure looks like, and 3D print a physical model. While John was helping me scan my hand it was hard to stand in one place as he had to circle me and capture every angle in order to make a 3D model, so I experienced “firsthand” the issues with capturing moving artifacts. 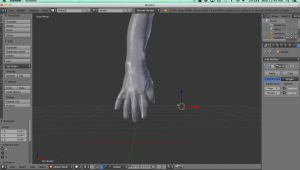 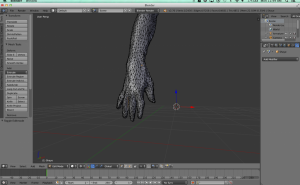 The last primary source I would like to incorporate into this scholarly discussion is one I found particularly interesting and relevent headed “Microscale Technologies for Tissue Engineering and Biology”, also published by the National Academy of Sciences of the United States. This article brings into conversation the fact that each year in the U.S. alone, millions of people suffer from a variety of diseases that could be aided from organ transplantation therapies. Now think about the widespread need for transplantable tissues and the fact that many patients die while waiting for donor organs. It is from this need that the field of tissue engineering has emerged. Tissue engineering is an interdisciplinary field that involves the use of the biological sciences and engineering (Bioengineering) to develop tissues that restore, maintain, or enhance tissue function. The article goes on to explain the issue

“Despite significant advances in tissue engineering, which have resulted in successful engineering of organs such as skin and cartilage, there are a number of challenges that remain in making off- the-shelf tissue-engineered organs.”

“the lack of biomaterials with desired mechanical, chemical, and bio- logical properties; and the inability to generate large, vascularized tissues that can easily integrate into the host’s circulatory system with the architectural complexity of native tissues.”

The article goes on to explain in the past few years microfabrication has been increasingly used in biomedical applications partly because of the emergence of techniques such as soft lithography to fabricate miscroscale devices such as microfabricated scaffolding that many tissue engineering applications use to provide cells with a suitable growth environment, optimal oxygen levels, effective nutrients transport, as well as mechanical integrity. Scaffolds aim to provide the environment to bring cells in close proximity so that they can assemble to form tissues, similar to how a 3D model is printed bead by bead layer by layer. So what happens when we figure out how to 3D print stem cells on the microscale? Is 3D printing organs for transplantation ethical? Who will have access to this potentially life changing technology? 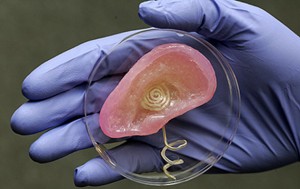