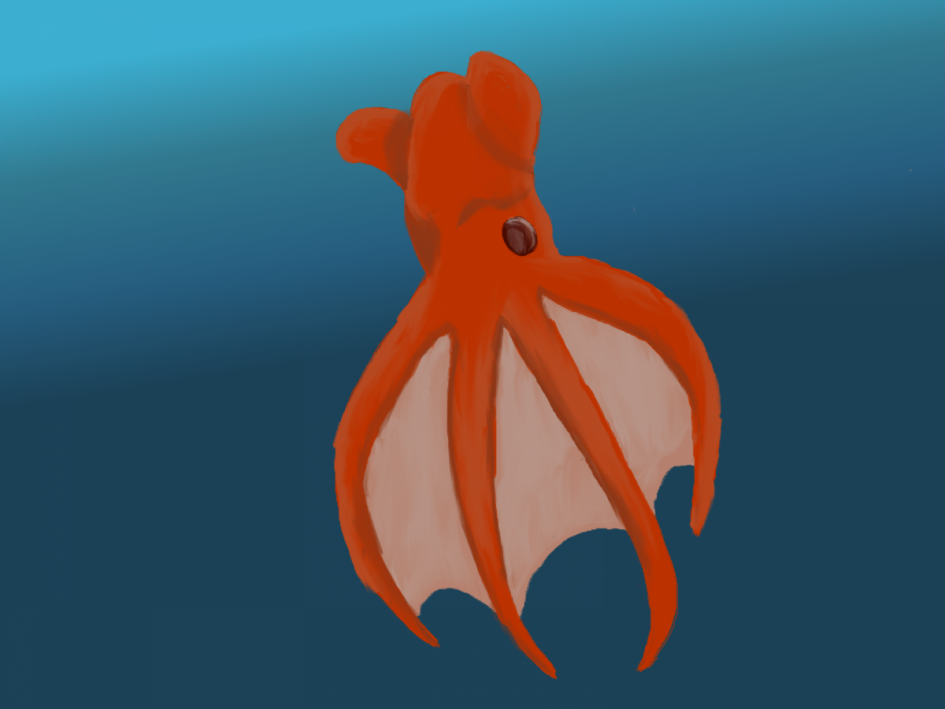 In this blog post, I will be discussing What I did for my final project. I compared the movements of the Vampire Squid (Vampyroteuthis infernalis) and the Moon Jelly (Aurelia aurita).

The Vampyroteuthis infernalis, or “vampire squid from hell” are the only members of the Order Vampyromorphida which is part of the class Cephalopoda. Vampyroteuthis infernalis is found in temperate and tropic regions of the ocean, mainly at depths of around 600-1,200 meters below the surface where very little light penetrates. Vampire squids are carnivores and typically eat copepods, prawns, and cnidarians and have a low metabolic rate. Vampire squids are not “true” squids but instead have a combination of different features for octopuses, other decapodiformes.

Similar to true squids, however, there is sexual dimorphism, females typically being larger than males. Vampire squids have eight arms, each one having suckers on the distal half, and two filaments. These filaments can retract into pockets found in their webbing between their arms. The filaments were at first thought to be arms, however, their structure and composition are different. Vampire squid also possesses two fins on either side of their mantle. The mantle can reach lengths of upwards of 12.1 cms. As the squids develop the fins change in size, shape, and even location on the mantle. The squid is also known to grow a second pair of fins, the first getting absorbed into their body once the second pair has matured. The fins allow the squid to switch between jet propulsion and fin propulsion.

Aurelia aurita, or Moon Jellyfish, are small jellyfish ranging from 5 to 40 cm in bell diameter. Aurelia aurita is found on the coasts of the Atlantic, Pacific, and Indian oceans. Moon Jellies can also populate waters with salt levels as low at 0.6% and can occur in large numbers in coastal zones. The moon jelly’s reproduction rate is tied to the oxygen level in the water, when the oxygen gets too low, their production rates slow down drastically. Moon Jellies swim horizontally to the surface allowing their tentacles to spread out over the largest area possible, allowing them to be more successful in catching food. Their swimming is mostly used to keep themselves close to the surface of the water, pulsating their bells to swim. Their diet consists mainly of zooplankton, but they can also eat small mollusks and crustaceans.

Vampire squids and the moon jellyfish both use jet propulsion to swim, however both species are not avid swimmers and mainly rely on drifting on currents to move. Jet propulsion is defined as the backwards ejection of a high speed jet of gas or liquid for movement. Even though both these species use jet propulsion, the styles are very different and are used for many different reasons.

The vampire squid uses a water siphoning method to propel itself. As the vampire squid drifts around water flows into what’s called a Mantle Cavity, this mantle cavity is also used to carry oxygen rich water to the squids gills. That water is then stored, and when the squid needs a quick get-a-way or is chasing down a prey organism, it uses the muscles in its mantle to push out the water via a funnel, creating a “jet” of water it uses to propel itself away. As the squid jets away it pulls its arms into itself to create an arrow like shape so it can move easier through the water.  The vampire squid is also known to use its fins for swimming and steering itself, and later in life it has been seen to solely rely on its fins for movement.

The moon jelly mainly relies on the currents for its movement, but it uses its form of jet propulsion to help keep itself vertical with the surface. The moon jelly swims by sending nerve signals through a nerve called the Sumbreller Nerve. This nerve runs up and down in the Sumbrella ( or Bell ) of the jellyfish. When the nerve is constricted the jellyfish pulsates (expands and contracts) causing water to be sucked up, and pushed out of the bell rapidly, allowing the jelly to move.

Umwelt of the Vampire Squid

Being a vampire squid, life is dark and lonely. There’s very little light to go around and when I bump into another organism my instincts kick in and I eat them before I can say hi. One day, or was it nighttime? A blinding light came down from the surface. I do not know where the light came from but at the same moment it appeared, it disappeared. I wonder what the light meant, should I have run or hid? Or should I have swam closer? I hope the light returns so I may find out.