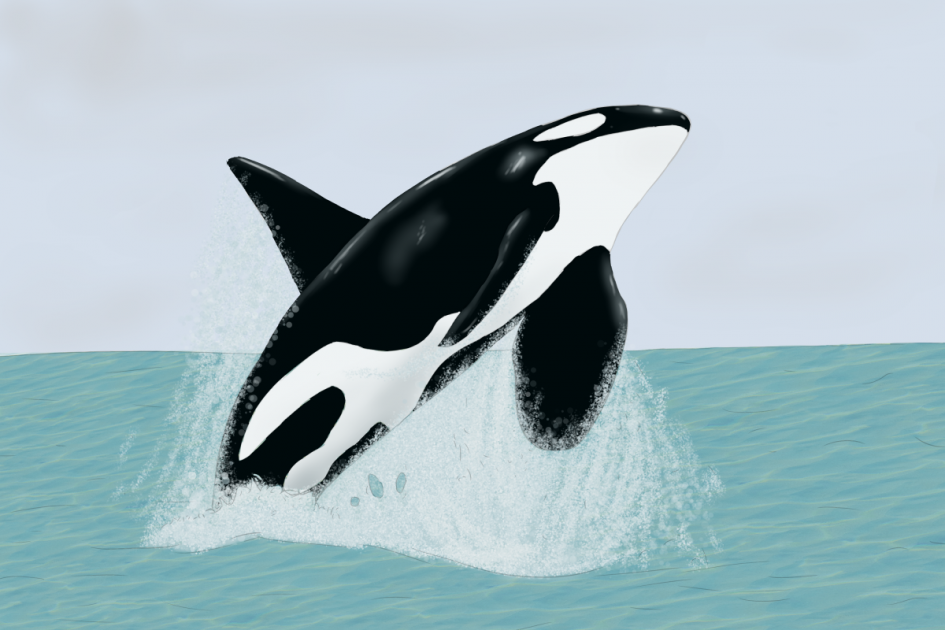 The orca (scientific designation Orcinus orca), also known as the killer whale, is the largest dolphin species, and one of the most widespread, living in portions of all of the world’s oceans (National Geographic). They are impressive hunters that often live in matrilineal family units called pods, though depending on location, type, and circumstance, the size of their group can range anywhere from two, to upwards of two hundred (though that high a number is uncommon, and only seen in animals termed as offshore). Orcas are apex predators, with a diverse diet ranging from fish and squid to marine mammals, including some species of whales like the bowhead whale, and even sharks. They are much larger than their fellow dolphins, growing twenty three to thirty two feet long, and weighing up to six tons (The National Wildlife Federation). There are also several types of orcas, and each type has its own unique attributes, social structure, and dialects, and may even be separate species. I will be focusing on ‘Type A’ whales as they are the most common, and there is the most information on them. However, most of this information is applicable to all types (Eagle Wing Tours Article).

Male and female orcas can be distinguished by looking at their dorsal fins, which are different shapes. A male orca has a tall and relatively straight fin (see figure 1) while females have shorter curved fins that end in a sharp point. Individuals can be identified by their dorsal fin and saddle patch (the light gray or white swath behind the dorsal fin) as much like a human fingerprint, no two are exactly the same. At this point, over three hundred individuals have been identified and named. There is significant variation in markings and coloring, especially between types, but Type A (all three images) is what most people generally think of (Georgia Strait Alliance).

Orcas are very social, and each group has a complex culture and dialect unique to them. Deliberate permanent separation on the part of any individual is very rare, being recorded on only a handful of occasions. Because of this family dynamic, and the focus on mothers, sharing is quite common, with females sharing almost all of the food they hunt (though primarily with their children) and males sharing around fifteen percent of the time (Georgia Strait Alliance). They swim and hunt together (see figure 2), using very sophisticated tactics to corner their prey. Orcas have a very long lifespan of fifty to eighty years (note that females generally live considerably longer than males, a female’s life expectancy would be closer to eighty while a male’s is closer to fifty) and daughters stay with their mothers for life, so it’s common for up to four generations to be traveling together (National Geographic). It is also interesting to note that calves are born with peachy pink/orange markings rather than white (see figure 2) and are very playful, much like human children are playful, and often born with lighter hair and eyes, only developing their normal coloring after maturing.

Orcas are highly intelligent, and each group seems to have a distinct culture, with sounds specific to them, food preferences, and even what could be seen as something like laws. In some pods, it might be a ‘law’ that the matriarch gets to eat first, in others there might be a rule that everyone has to take a turn with ‘babysitting’ the calves while the rest of the pod hunts, etc., similar to how most human families have rules unique to them. There are very few animals with a social structure this complex and stable, and this seems a clear indicator of how sophisticated and intelligent these creatures are (The National Wildlife Federation). Orcas are playful, and enjoy leaping around (see third image) and swimming at high speeds, with individuals showing unique personalities, and senses of humor. They are incredible animals, and share much more with us than most people realize.

The animation is focused on the way orcas swim and move together, and on the patterns of swimming behavior unique to them. They are incredibly nimble for their size, and the way they move is quite fascinating. Orcas are surprisingly hydrodynamic, and very efficient swimmers, though their bulk requires an incredible amount of energy to maneuver as quickly as we see. Calves have to learn how to swim, and practice before they’re experts at precise movements like their parents. Fortunately, they get a lot of practice at this with all the playing and jumping around they do (Frank E. Fish).

The orca is a very interesting and unique animal with incredibly complex lives, in everything from their family units to the way they breathe. They have a distinctive look that is easily recognizable and very different from most other dolphins, and are very impressive in both size and maneuverability. The way they teach their children and the strong familial bonds they forge aren’t something you can find in just any animal. Orcas are energetic and playful, as demonstrated in the animation, and interact with each other in very sophisticated ways. They are amazing creatures, and deserve much more respect and recognition than they receive.

All text and images subject to copyright