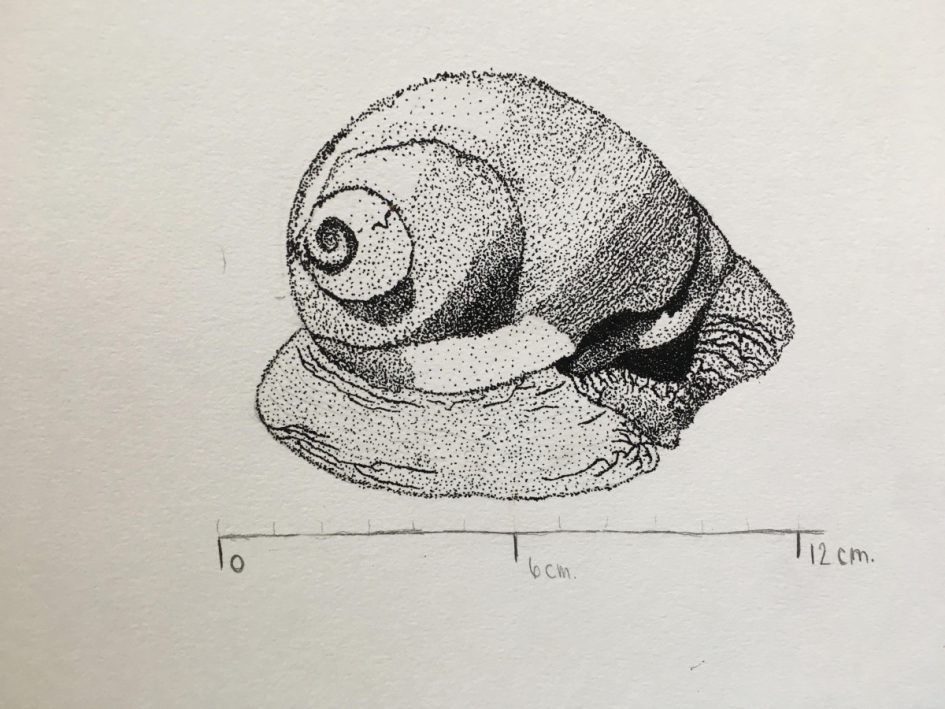 The Naticidae, more commonly known as the moon snail, belongs to the class Gastropoda and the order Littorinimorpha. Gastropods are a class of animals containing snails, slugs, limpets, and sea hares. There is a large variety in shape, size, and location when it comes to gastropods. The name gastropod comes from the Latin words gastro (stomach) and pod (foot), so a gastropod is an animal whose stomach and foot are in the same body part (Pier). The foot is unlike a human foot, but it does help the animal move around. Among the gastropod class is the order Littorinimorpha, which contains primarily sea snails but also some freshwater and land snails. If we focus in a little more, we end up in the family Naticidae, better known as moon snails. There is some variety in moon snails, but they tend to be larger than most sea snails, their shells can grow up to four inches in diameter, about the size of a fist (Crowder, 1935, p. 32). Moon snails also have a large foot, with the ability to inflate four times the size of their shell by absorbing sea water (Elise, 2017). Moon snails tend to have swirled shells that come in a few different colors, most commonly white/light gray, or light brown. Some shells have variations of blues and oranges as well. Moon snails are found all over the world and at different depths. Moon Snails move out into deeper water in winter, then come back toward the shore in summer, when they are breeding (pugetsound.edu).

Moon snails are well known by their means of reproduction, laypeople often come across discarded sand collars on the shore. Sand collars are where the female snail  lays her eggs; “The eggs are laid in characteristic large (to 15 cm diameter) sand collars, sandwiched between two layers of sand cemented together by mucous secretions. The collar, somewhat like a flattened clerical collar with a big opening in the center, contains great numbers of eggs that hatch into veliger larvae within the sand.” (pugetsound.edu). These sand collars can contain millions of tiny sea snails waiting for the sand to wash away, releasing them into the water column (Crowder p. 41).

Another thing that washes up on shore making moon snails especially notable are shells with holes drilled in to them. Moon snails are carnivorous, feeding on infauna, bivalves, and other gastropods (Page & Pedersen, 1998, p. 58). Moon snails use their enormous foot to burrow in the sand before leaping out to smother their prey. The moon snail completely covers the prey with it’s foot, then begins to drill a hole into the prey’s shell using the radula (Crowder p. 36). The radula is a tongue-like organ with zipper teeth on the end perfect for drilling holes. Along with the radula, the moon snail secretes enzymes and acids to aide with the drilling (pugetsound.edu). Moon snails have been given the nickname “necklace shells” because of their feeding habits; the holes are perfect for stringing the shells together to make necklaces.

If I were a sea snail, I would not see or hear or think, I would just be chilling in the sea. I would cruise along the bottom, and I would feel the water constantly rocking against my shell and foot. I feel an overwhelming urge to burrow in the sand to hide from predators and prey. When I sense there is prey nearby, I leap out and latch on to my prey. I drill a hole into the shell using my tongue to suck out the good stuff. When the water is getting warmer, I know that it is time to head towards shore. There I will find a mate and lay my eggs. I know that I need to nest for my incoming offspring’s protection, so I burrow into the sand while secreting a mucus that holds the sand together. Once I have laid my eggs, I crawl out of the nest and return to chilling in the sea.