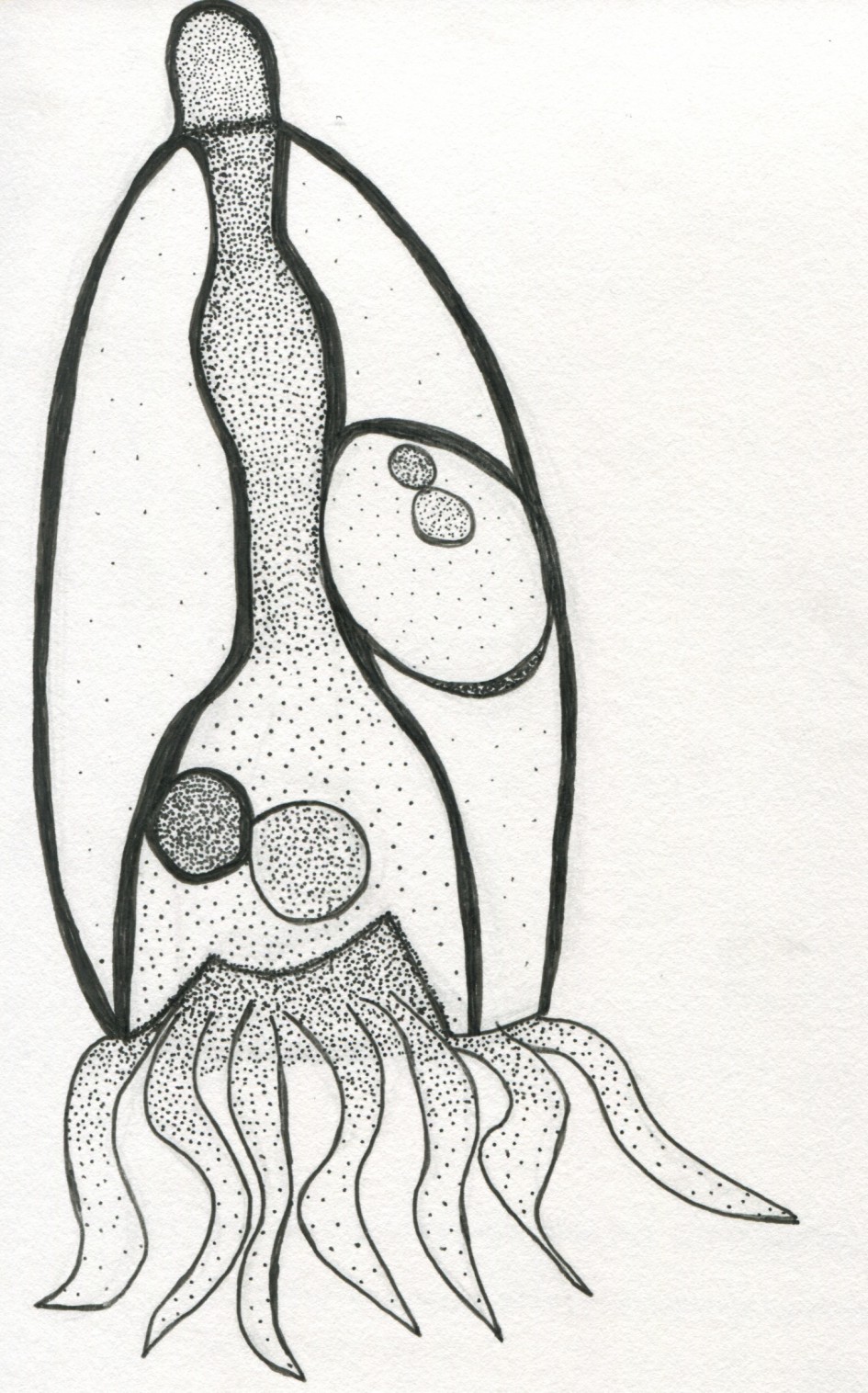 Tintinnid interacting with its predator, a Copepod.

The Tintinnid is a part of the Eukaryotic domain, under the phylum Ciliophora, in the class of Spirotrichea, with a subclass of Choreotrichia, and an order of the Ciliate. Tintinnids have shells that are characteristically trumpet-shaped, that vary in size, which are called loricae. The Loricae protects the Tintinnid, acting as a hardened shell, but can detach from the organism. Tintinnids are heterotrophic plankton. They have a ring of polykinetids or membranelles surrounding the mouth of the organism. They feed on various organisms such as the non-motile diatoms and motile dinoflagellates, and are food for larger zooplankton like the Copepod. Their hardened, vase-like shells classify Tintinnids, with a vast variety of different species in its genus. They range from 20-200 micrometers in size. The cilia surrounding the organism’s mouth support the feeding process in a unique way. As the polyketide form circularly around the mouth of the organism, the hair-like membranelles cycle in a way that creates a current that sucks in its prey into the cytostomal region. Through this created current, the cilia not only support the feeding of the organism, but also aids in the movement of the Tintinnid. Instead of “searching” for prey, Tintinnids propel through their environment and encounter food through random movement. Additionally, Tintinnids find prey at a higher level when attached to the Lorica surface. When the organism encounters its prey, it filters the water through its cilia, causing the nutrients to reach the oral cavity and be captured and then processed. Sometimes, though, prey can also be rejected if their size is too great for the oral cavity. This idea of rejection shows the complexity of Tintinnids from other planktonic organisms. Instead of just filtering their food, Tintinnids have the ability to choose their diets. Once the prey reaches the oral cavity of the organism, the prey is ingested through a defined cytostomal region and forms a food vacuole. After the food ingests, the final step requires egestion. This process of eating shows the complexity of the Tintinnid and stands out as protozoa (Dolan et al., 2012).

Tintinnid interacting with other organisms

During feeding, Tintinnids were found to die due to ecological causes. Per Juel Hansen, a professor at the University of Copenhagen, observed one cause for a increase in Tintinnid death: the ingestion of the Dinoflagellatealexandrium tamarense in Denmark. In his article, “The red tide Dinoflagellate alexandrium tamarense: effects on behavior and growth of a Tintinnid ciliate,” he argues: “The algae are ingested by the ciliate… The exudate acts on the cell membrane and induces ciliary reversals resulting in continuous backward swimming. After some time, ciliates swell and subsequently lyse” (Hansen et al., 1987). He tests his hypothesis by cloning the algae from nearby waters in Limfjord, Denmark, and placing them into a beaker with Tintinnids.

To test the difference in swimming patterns, Hansen mounted a microscopic camera to record the actions of the Tintinnids after consumption of the algae. He observed: “The normal mode of motility is swimming in a forward, smooth, helical path inter- rupted by ciliary reversals (tumbles). When added to 3000 cells ml-‘ of the highly toxic pH 7 clone Alexandrium tamarense (late exponential phase cultures) ciliates begin to tumble more frequently and periods of backwards swimming are pro- longed. After some hours these ciliates lyse” (Hansen et al., 1987). From these observations he concludes that, “Alexandrium tamarense produces substances which are lethal to the marine ciliate. The exudate acts on the cell membrane of the ciliate to induce continuous ciliary reversal. After some time, the ciliate swells and subsequently lyses” (Hansen et al., 1987). This information helps to outline that Tintinnids are affected by climate change, which in turn drastically affects the entire food chain and nutrient availability. The occurrence of Tintinnid death symbolizes the impending fate of human existence. This small-scale event, where Tintinnids were observed to swim differently and in turn lyse due to their diet reflects on the future of human survival. As the Tintinnids are primary producers, if they die from environmental impacts, the poison in the food chain will drastically affect human existence. This situation is a perfect example of the GAIA hypothesis as well, because an organism as small as the Tintinnid can determine the fate of the human race, and humans need to be reminded of this so that in the future there will be coexistence. The Tintinnid can become a symbol for coexistence, because the true way to connect and change Anthropogenic ways is by starting with the smallest and arguably most important part of the food chain.