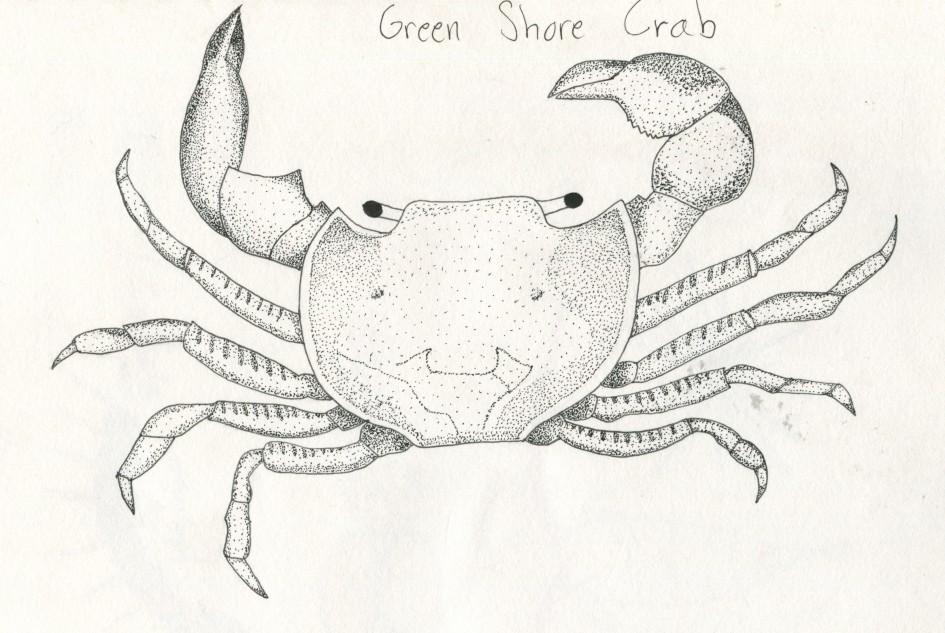 Carcinus maenas is an aquatic invasive species from Europe that entered the U.S. in the mid 1800’s. In 1989 they were found on the west coast, in San Francisco Bay. It is thought that they were transported in the ballast water of ships or among the kelp packed around live main lobsters or with Atlantic bait worms. Within three years they were well established, but because of the strong El Nino currents in 1997 they soon made it into Oregon, Washington and British Columbia estuaries. They have grown rapidly and reproduced, but partially attributed to rapid response and control efforts, have not become well established here.

Spreading northwards in the early 1900’s the green shore crab is believed to be a contributing factor in the declines of the soft shell clam population. Although the green shore crabs cannot break the shell of a mature oyster, they can break the shell of soft-shelled clams. They will also prey upon young oysters and dig up to 6 inches to find clams to eat. A single green shore crab can eat up to 40 half-inch clams a day and is known to prey upon other crabs its own size. In areas that Carcinus Maenas has established strong populations, it has drastically impacted other species in the immediate area, in particular, smaller shore crabs, clams, and small oysters. Linking the green shore crab to our world. Humans leaving a planet that they have ruined and invading a new place to call their home. the green shore crab larval stage as a plankton

Its five spines or teeth on each side of its shell can identify the green shore crab. There are also three rounded lobes between the eyes and the last pair of legs is flattened. Despite its name the green shore crab is not always green and is commonly found to have molted dark brown to green coloration on the top of its carapace. The ventral surface of the crab is commonly found to be orange or green and then red during molting. Typically an adult green shore crab is about 2.5 inches long but ranges to 4 inches in size. The male crab is generally larger than the females; these crabs grow by molting their carapace. Generally males will mate with females smaller than themselves. Often females will reproduce multiple times. Mating generally takes place from June to October in deeper waters due to the stable salinity and temperature conditions. Successful development occurs at temperatures between 11 and 25 degrees Celsius. The survival of the eggs to larval stages requires a salinity of 26 to 39 ppt, under 13 ppt are almost completely prevented. The first stages of the life cycle aggregate to the surface waters during nighttime when there is an ebb tide, when the current velocities are highest. This is to avoid inshore stranding. The shore crabs ensure their return to coastal waters where at the Megalopae stage, molt and then settle as juvenile crabs in upper intertidal zones.