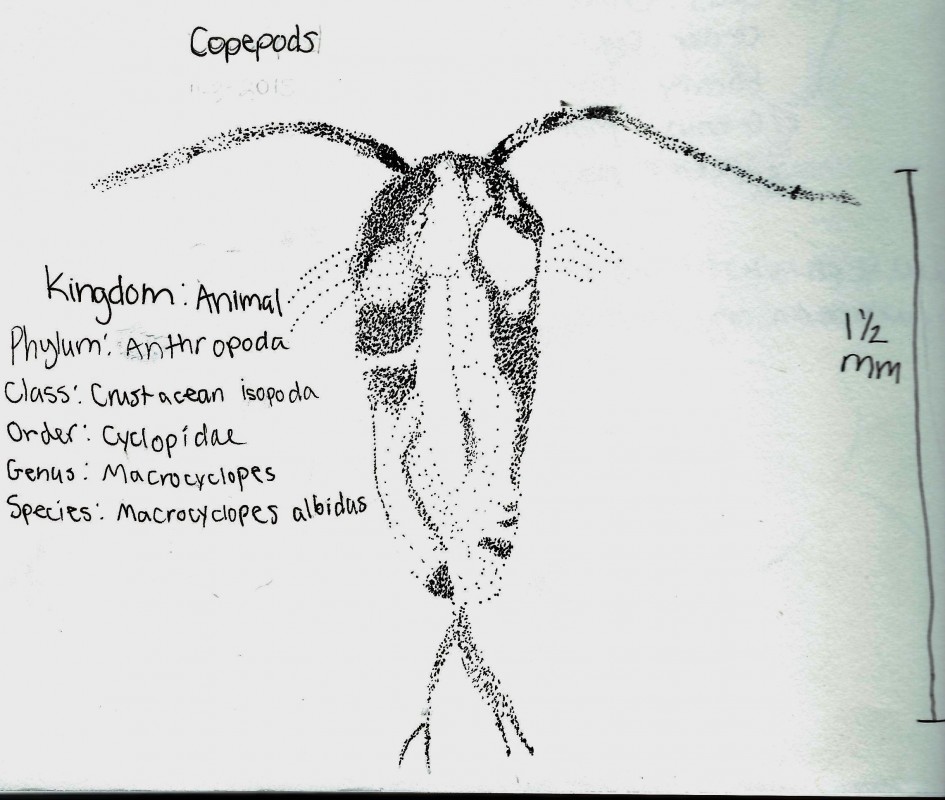 What is a Copepod This is a specific species of copepod called the Macrocyclops albidus.

This is a tiny crustacean, so that would mean copepods are related to lobster and cray fish. Copepods are the most numerous of all metazoans. They have two main body parts, the cephalothorax and the abdomen. The abdomen is like a rudder and helps steer the copepod while swimming. You can find these organisms in a variety of places. They can be found in streams of fresh water, estuaries, leaf litter, caves, deep trenches, tops of mountains and oceans with a very high salt gradient.  On average the copepod is 1-2 micrometers, although they can be as small as 0.2 micrometers or even up to 10 micrometers (Boxshall). The female copepods are much larger than the males. When the females mate they carry clusters of eggs in an ovisac. The eggs can hatch as quickly as 12 hours or take up to 5 days. They eat on an array of other microorganisms which include but not limited to bacteria protozoans, tiny insect larvae and even other copeopds. Copepods are found in a variety of habitats which include salt water. They can be found in a wide range of salt gradients.

Copepods carry their eggs in ovisacs, this is very important to their survival.

Humans tend to not understand how important organisms are that they cannot see. If copepods were not in the ocean, the ocean would not be flowing with life. When an animal dies it is consumed by other animals, the smaller pieces are eaten by smaller animals, and then smaller animals eat the even smaller pieces and so on. Copepods do eat the dead organic matter but they also eat the organisms that eat the tiniest pieces of organic matter, which are protozoa. Without the copepods the loop would not continue. This would leave an ocean with less microbial life because the copepod species are not there to give energy to other organisms. I believe people tend to not think what happens to animals when they die. What they need to know is that each organism is used to create energy for other organisms. Copepods play a huge part in this loop and people should learn that the ocean is more than just large fish and whales. It is an ocean that contains a whole other world we cannot see. Which are the microorganisms including but definitely not limited to the copepods. With and without copepods.