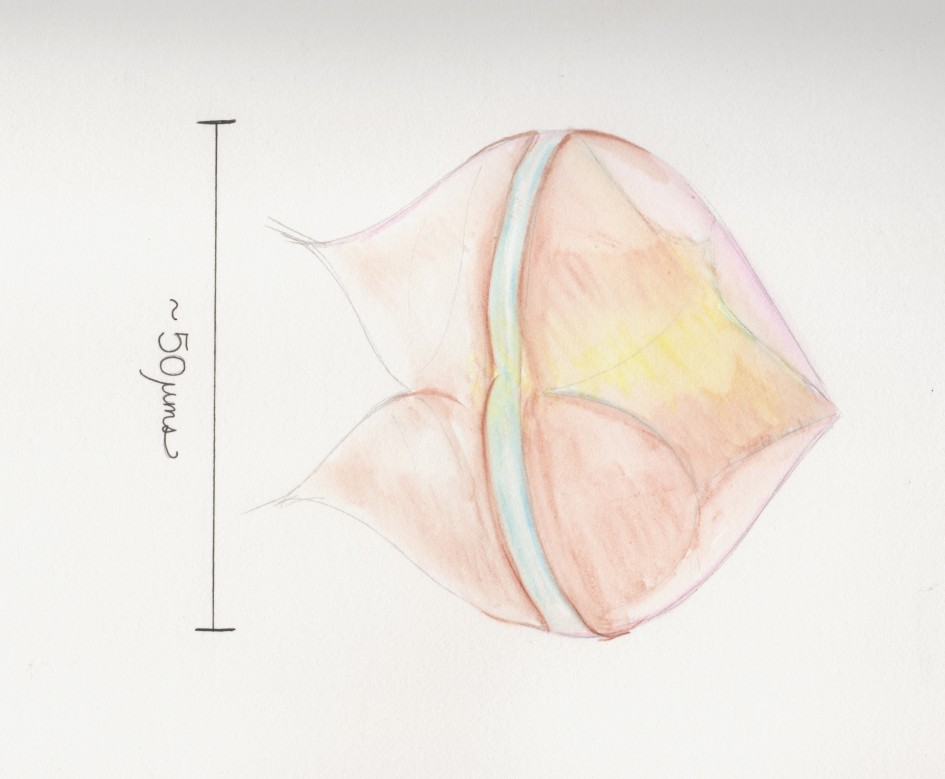 Protoperidinium leonis is a heterotrophic dinoflagellate, relatively large in size (~50-95 micrometers).3 The evolutionary and life history of the Protoperidinium is not well known, but the Massachusetts Institute of Technology have recently observed aspects of the organisms’ life regarding their ecology and reproductive cycles. Protoperidinium was at one point discovered to reproduce asexually, creating two daughter cells out of division of a cyst. These daughter cells appeared to be initially round, forming horns before splitting. However, in some clonal cultures, sexual reproduction was present, suggesting that Protoperidinium doesn’t mate exclusively through asexual division. Because of the multitude of varying observations of the Protoperidinium’s reproductive and life cycle, this has led to confusion while identifying different types of dinoflagellates.1

Protoperidinium have been known to play in integral role in the consumption of phytoplankton and other primary producers. It has been observed that the majority of Protoperidinium species consume their prey externally, capturing and digesting them in a pseudopod called the pallium. Because their pallium is an external feature, they can prey on phytoplankton larger than themselves, including nauplii, copepods, and other larvae. Because of this, they serve as competition for mesozooplankton. A study was done observing the mass grazing impact off the coast of Ireland in the Celtic Sea, and thecorrelation of this genus of dinoflagellates to azaspiracid (AZA) shellfish toxicity. Thirty two species of Protoperidinium were recorded, and due to their abundance and feeding habits, were estimated to consume 30-80% of the phytoplankton in that area. Protoperidinium could contribute to AZA production and toxic algal blooms, possibly through the mass consumption of toxin-containing phytoplankton. The spread of AZA and harmful algal blooms has created a devastating impact on the health and economics of this region in Ireland, as it has led to many closures of fisheries and shellfish harvesting sites.2

Beets, Beats, and Dinoflagellates: an animation created by CAP that illustrates Protoperidinium leonis taking different forms of life. This was created to show how we make closure, or connections to what we see, to larger world issues, like resource equality and climate change.

My animation plays with the concept of closure, introduced to us by Scott McCloud of Understanding Comics. Upon my discovery of Protoperidinium leonis and further illustrations and research, I realized that this dinoflagellate strikingly resembled a beet root, and, when turned upside down, an anatomical human heart. After discussing with my classmates and others whom I showed my observational drawings to, who shared the same connection, I decided to incorporate this into my animation. Not only would it make a short animation about plankton artistic and interesting, but it would help serve as a metaphor of their importance, and how we can think of them in the context of larger world issues, including the health of humans and climate change.

In my animation, the viewer is peering into a microscope: a flat landscape of a cluster of diatoms and dinoflagellates. Then the focus turns towards Protoperidinium, located in the center. It transforms into a beet, and then into an anatomical heart that beats for a few frames before transforming back into its original form, Protoperidinium leonis.