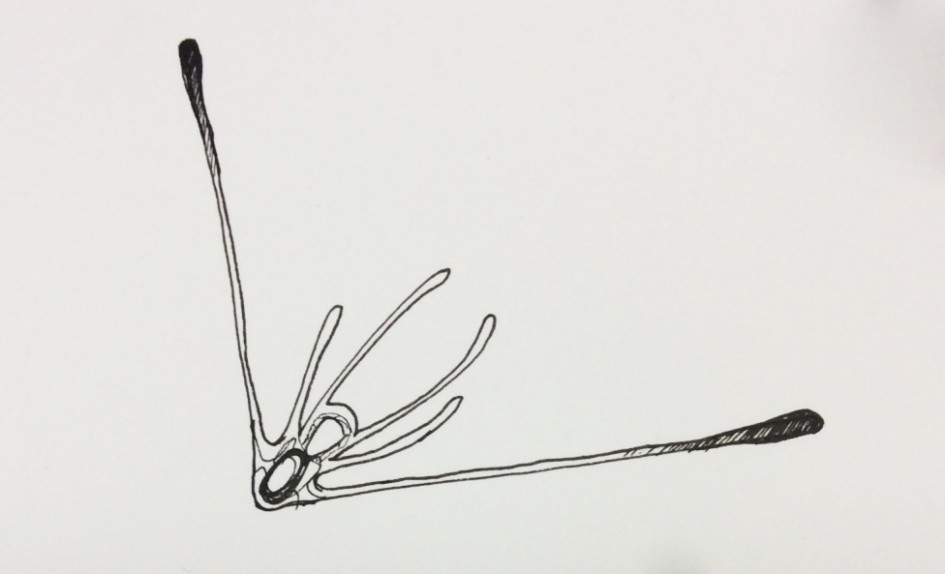 Ophiopluteus, or the pluteus larva of brittle stars.

Brittle star larvae are small ridged, and transparent. Some have a colorful tint to them, such a dull blue or orange, but for the most part they are clear. Brittle star Larve are arguably one of the most strange looking larvae, and some say they resemble small spaceships. The number of arms on each side of the larvae sometimes determine how far along into development they are. If they have 2 arms they are very young, then they develop 6, and then 8 arms. A Brittle Star grips onto a coral, an organism it has a symbiotic relationship with, as it feeds.

Brittlestar or Brittle Sea Star is common name for echinoderms belonging to the class Ophiuroidea. The name comes from their habit of breaking off arms as a defense and to distract predators while the sea star escapes. It’s not much of a loss because they can regenerate new arms easily. While most common starfish have tubes under their limbs that move the entire body, Brittle sea stars use their slender and mobile arms to drag their body across the ocean floor. Because of this movement they are sometimes called serpent stars because their slender arms are snake like. When brittle sea-stars reproduce (when they’re not reproducing asexually and cloning themselves), they create fertilized eggs that float around the water and slowly develop into swimming larvae called ophioplutei.  Ophioplutei feed on plankton for a few weeks and will eventually go through a metamorphosis, and transform into five-armed juvenile brittle stars. The next stage of their life is called the settling stage, because they gently float to the bottom of the ocean floor where they spend the rest of their life. Their arms are very ridged and do not have the ability to move, they do however act like a cage for trapping smaller organisms as tiny cilia stir the water and pull food towards its mouth, which is located where the arms protrude from. Some species of Brittle Stars are bioluminescent, and this light is used to deter predators.

Brittle stars have a very important ecological role in the functioning of the ocean. In both their adult and larvae forms, they serve as food for big commercial fish. There is even evidence to suggest that large beds of brittle sea stars improve the quality of coastal waters by eating massive amounts of floating nutrients in the water. Some scientists even believe that they help counteract the effect of eutrophication, when humans put excesses nutrients into the water. The Brittle stars name comes from the fact that it is very liable to break. It loses arms effortlessly as a defense mechanism, but are able to regenerate them easily. Brittle stars teach us that no matter how small or delicate we are, we always have an impact. We may even lose a limb or two in life, and although we can’t grow ours back, we must always push forward and surivive. It is one of our most basic and primal instincts.