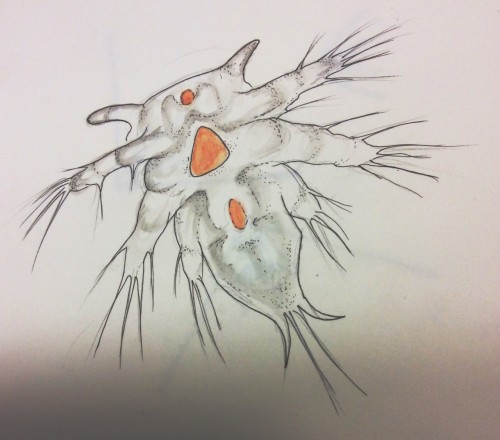 Barnacle larvae are mostly transparent, save for a few orange/yellow spots on its head, the middle of its body and it’s rear. It moves very quickly by pushing its two front limbs to the sides of its body, launching itself forward for a short burst of speed. Barnacle larvae usually have six legs and most crustacean larvae do not look anything like their adult forms, so it sometimes hard to determine what they will transform into. Crustacean larvae are minuscule and planktonic (they drift through the water column) while their adult forms are usually benthic (sticking to the bottom of the sea floor) Adult barnacles are stationary creatures and are usually attached to rocks or docks, so they do not have to ability to just stand up and search for a mate (like the ones below). This means they only way they can reproduce is if they mate with the barnacles surrounding them. Evolution has solved this problem by making barnacles hermaphrodites, meaning all barnacles have both male and female parts at the same time. Fertilized eggs are kept in the mantle cavity until they hatch. After fertilization occurs, the eggs hatch and the larvae stay with the mother until there is enough plankton in the spring.

The larvae above is currently in the nauplius stage of its life. It stays in this form after hatching while being brooded by the parent, then swims free. A colony of barnacles in their natural habitat, fusing to the surface of rocks.

After growing for six months, molting many times in the process, it grows into it’s second to last form – the cypris state. In this stage it doesn’t eat (it is loaded with fat for buoyancy and energy) its only objective is to find a suitable place to live. Each antennule have special sensors on the end that let the cypris pick up physical and chemical features of the sea bottom, so they can locate the perfect place to settle. Using its antennas, it will anchor down and transform into a barnacle. Within 12 hours of attachment it becomes a mature barnacle with a shell. Barnacles are filter feeders and attach themselves to whatever they can find, wither it be inanimate objects just as rocks or docks, or living creatures like whales and sea turtles. The type of symbiotic relationship that barnacles have with some whales is named commensal, because it is beneficial to one species and the other species is unaffected. The barnacle is one of the most infamous marine fouling organisms to date. (Marine fouling takes place when organisms attach themselves to man made objects, usually boats, and slow down ships and cause them to use more fuel).

Reshetiloff, K. (2008). There are Many Good Reasons for Barnacles to Stick Around. Retrieved 2015, from http://www.bayjournal.com/article/there_are_many_good_reasons_for_barnacles_to_stick_around