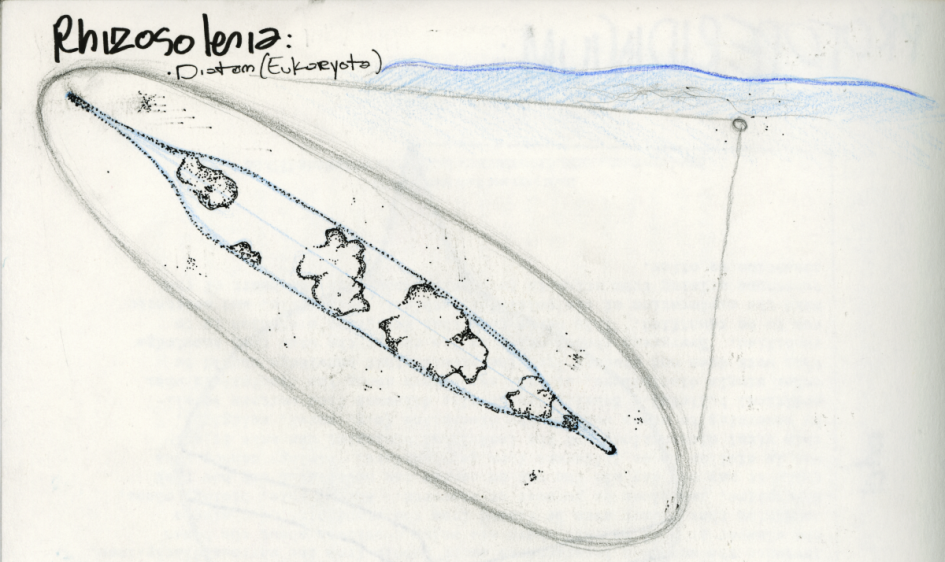 Rhizosolenia in its natural environ.

Rhizosolenia is a diatom which belongs to the group 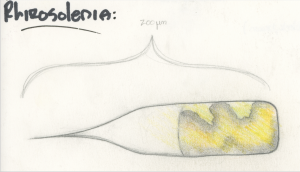 phytoplankton, because of this, it means that Rhizosolenia is a drifter and therefore doesn’t have any control over its movement. It is also an eukaryotic unicellular organism. It is found in brackish and marine waters. It can stand a wide range of temperatures but prefers warmer waters. It takes on the appearance of an elongated transparent rod, with small sacks of chlorophyll giving it a neonish glow. Rhizosolenia’s body is made up of silica, glass, giving it it’s transparent look. On average it can be 200 um long. Rhizosolenia can take on two similar, but different forms; one in a rod shape and another looking like a turkey baster with two heads.

This is because Rhizosolenia usually reproduces asexually, by splitting itself into two similar pieces. The process is able to happen because of the two-layer silica wall called a “frustule”. It will start to divide within itself and once that is finished it will split for good. It will continue to go through this process until it is unable to split anymore, then it requires itself to reproduce sexually. Then it repeats itself. 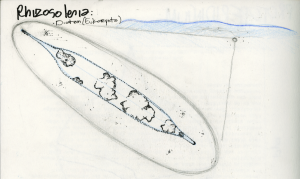 t only drifts individually, but it is able to come together and form a giant Rhizosolenia matt.
A giant cluster of Rhizosolenia species huddling together. As a matt they can float as a colony and be visible to the naked eye. Mats seem to be delicate and only form under the right conditions (i.e. little wind or surface disturbance) and are crucial to the photic zone–Rhizosolenia “accounted for 2–30% of the total chlorophyll a in the upper 10 m and 98% of the biogenic particulate silicate” (Villareal et al., Nitrogen Fixation, Suspension Characteristics, and Chemical Compositon…). This means is that Rhizosolenia plays a huge role in the production of oxygen and in naturally made glass. But that’s not the only way these mircoorganisms move; they tend to migrate vertically giving them an advantage to move up and down in the water column.  Rhizosolenia won’t just migrate individually, but as mats. “These macroscopic diatom mats are composed of multiple species of Rhizosolenia that exploit subsurface nitrate pools by vertically migrating below the euphotic zone” (Villareal, Vertical Migration or Rhizosolenia mats…). They migrate by increasing and decreasing their buoyancy, they do so that they can have more access to inorganic nutrients, specifically nitrogen.

For the 21st century, Rhizosolenia, specifically it’s chlorophyll can be digital translated into visuals to represent the increasing warming of the oceans. (Since they prefer warmer waters, they probably migrate further north increasing their range.) They’ll digitally transcend themselves