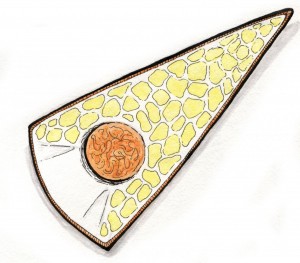 Licmophora is a genus of benthic diatom. It is an epiphyte, which means it must perch on another organism or object for structural stability.Typically, licmophora are distinctly triangular and form a striking fan shape around a central stalk. They are usually a yellow or brown in color, not green, despite being photosynthetic. (Guiry) They are abundant all over the world in both marine and freshwater environments. (Davidson)