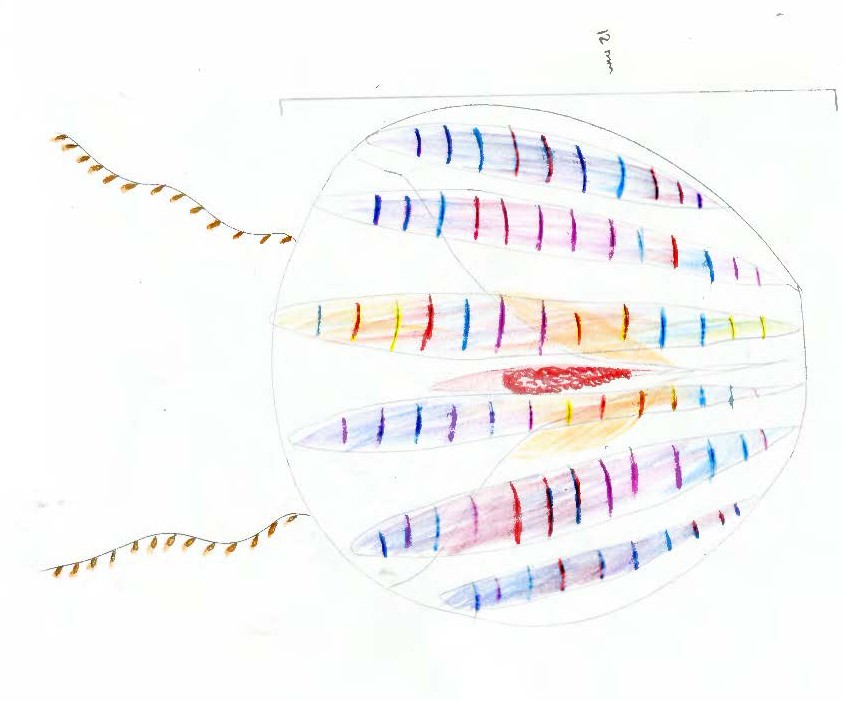 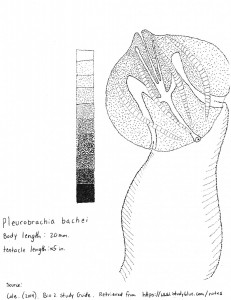 Pleurobrachia bachei also known as a “Grape Jellyfish” or “Sea Gooseberry”. Ctenophores are commonly found in all oceans around the world.

The humble Pleurobrachia bachei is also known as a Comb jellyfish. However, these animals are not related to true Jellyfish. Comb Jellies and Jellyfish are in separate phyla, whereas the true Jellyfish belongs to the phylum Cnidaria, and the Comb Jellyfish belongs to the phylum Ctenophora. The Comb Jellyfish which is recognizable by the conspicuous rows of cilia that it uses for locomotion and the true Jellyfish such as the Moon Jellyfish, flexes its bell for locomotion. “In contrast to other basal metazoans, ctenophores (comb jellies) have both complex nervous and mesoderm-derived muscular systems. These holoplanktonic predators also have sophisticated ciliated locomotion, behaviour and distinct development.” (Moroz, et al. 2014). Comb Jellies are found in every ocean across the world and at every depth of the oceans. The most northern of the Comb Jellies are the Arctic Comb Jellyfish that are found in the Baltic Sea off of the coast of Sweden.

Comb Jellies are some of the oldest known organisms according to some scientist and there is still much controversy in the scientific community of how old the phyla Ctenophora actually is. “The phylogenomic analyses of both amino acid positions and gene content suggest that ctenophores rather than sponges are the sister lineage to all other animals”. (Ryan, et al. 2013). Different species of comb jellies are being studied by scientists because of their potential benefit to humans. The Pleurobachia bachei genome has been fully mapped and the scientist are studying which genes are activated to support remarkable regenerative properties that also include a regenerative brain and basic nervous system! P. bachei could very well hold the secrets to a cure for degenerative brain diseases such as Parkinsons disease and Alzheimers disease.

Some species of Comb Jellyfish have been credited for destroying some marine habitats and even destroying some fisheries. “Comb Jellies can occur in huge numbers and are known to effect fisheries at times because of their feeding on the eggs and fry (newly hatched and young fish). Mnemiopsis leidyi is common on the Atlantic coast of North America where it normally feeds on copepods and the larval forms of various other marine animals. These other species include the larvae of Oysters and it sometimes accumulates in such vast numbers that it has a negative effect on the Oyster crop”. (Ramel, 2013). 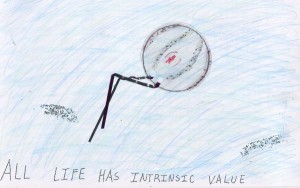 The comb jellies of the worlds oceans harbor secrets that could benefit humanity. These little organisms, that many people don’t know they even exist, could help people with debilitating and life threatening diseases and P. bachei could possibly change the paradigm of the evolutionary path forever by changing what scientists know about the evolution of the basic brain and nervous system of  P. bachei. What people should take away from the little Ctenopthore, that we lovingly refer to as the sea gooseberry, is that all life is intrinsically valuable. Just because a life form may seem far from our own or that it is nothing more than a pest, just remember, that those same organisms such as P. bachei hold secrets that may enrich our own lives and lives of others. Pleurobrachia bachei is a beautiful, unique and multifaceted organism (in more ways than one) that lives right in our coastal waters and can be seen nearly everywhere. Comb Jellies can range in size from a few millimeters to a almost a meter in length, which makes them easily seen and identifiable. So, take a trip to your local beach to see, most likely, the oldest animal species on earth.