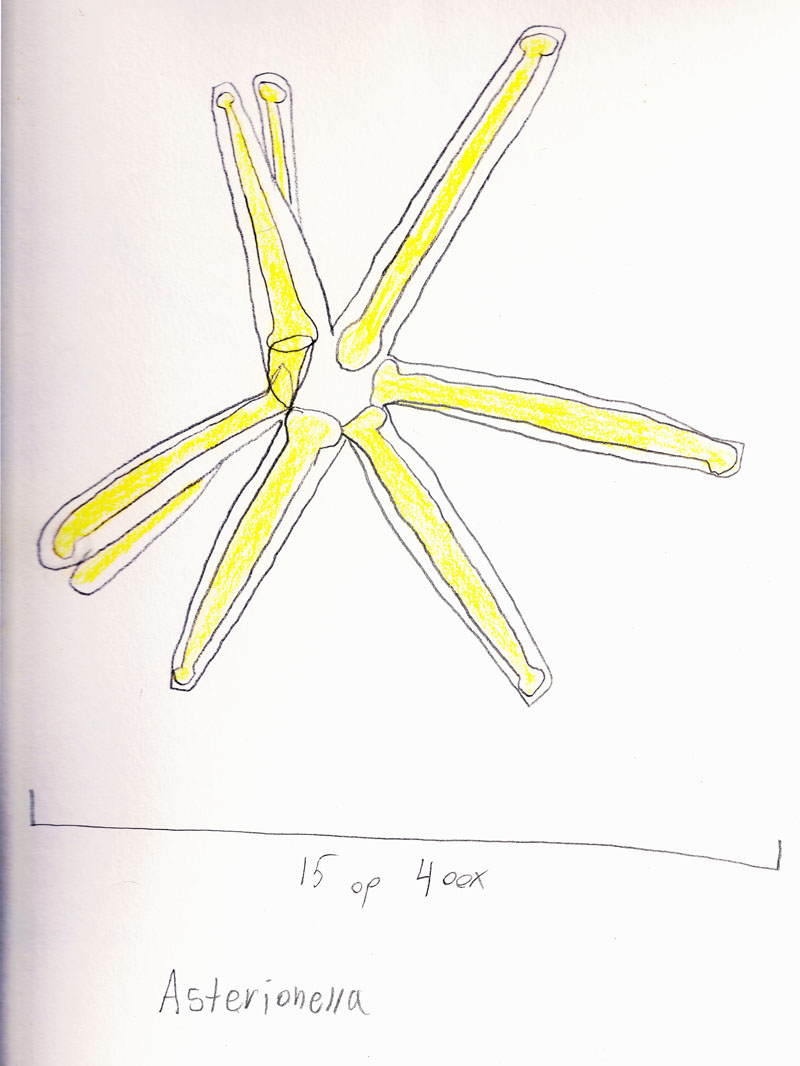 Asterionella is a genus of a diatom. They are often found in colonies of eight or more in the shape of a star, which is how they got their name.  The average size of an Asterionella colony is between 60 and 80 micrometers long, with each arm being 2-4 micrometers wide.  Each arm cell is attached to the other cells by means of extracellular matter.  Each arm cell is linked by means of a valve face at the bottom of the arm cell, it remains connected by mucilage pads. (Spaulding 2012) 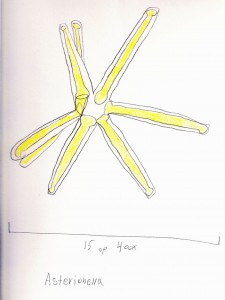 The Asterionella consists of a cell wrapped in a protective silica skeleton, called a frustule.  The silica skeleton consists of an epitheca and a hypotheca.  The Hypotheca is slightly smaller than the Epitheca.  During asexual reproduction both the thecae and epitheca of the new daughter cell produces their own hypotheca, however the daughter cell is always smaller than normal. It is currently not known, although it is assumed, that the cells regain average size through sexual reproduction. (Arnout De Bruin 2004) 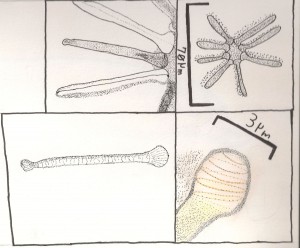 A detailed examination of Asteroinella and the different sections of the limbs. Ink with stipple method and some color pencil on paper. 5/17/2016

Asterionella and humans share the capability to shape their environment.  Asteroinella, when blooming and over populating, are capable suffocating an entire area of oxygen.  Humans pump harmful toxins into both the air and water, killing countless.  While Asterionella do not know what they are doing, we humans do.  We can see and understand the impacts we have on the surrounding environment and we are capable of changing for the better.

It is the hard and porous cell wall of a diatom. This is generally composed of silica, more commonly known as glass. So Asterionella, the star shaped diatom, has a glass exterior!

This is part of the frustule, which as we remember is the glass exterior.  The Frustule is not a solid chunk of glass, but is made up of sections.  The Thecae is the two pieces of glass that connects, a bit like the plastic Easter eggs.  One part is slightly larger and overlaps the slightly smaller, connecting the two.

Greeson, Phillip E. 1982. An annotated key to the identification of commonly occurring and dominate genera of algae observed in the phytoplankton of the United States. Water supply, n/a: U.S. G.P.O. 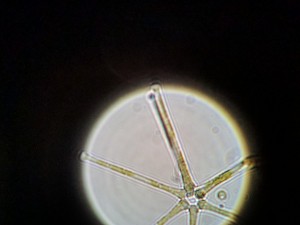 Photograph of Asteroinella through microscope eye piece on 5/3/2016. Taken with cellphone camera at 12.3mp