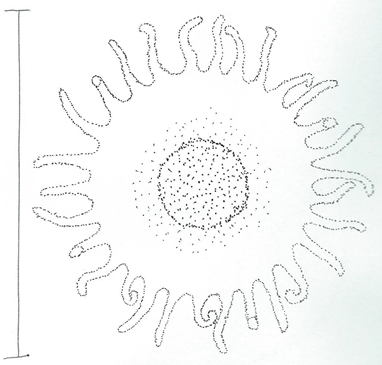 Ephyra are the larval forms of jellyfish that can inhabit the planktonic range. Ephyra break off of the scyphistoma (a stalk fixed to a hard substrate that produces larval jellyfish through budding) and become free-swimming organisms that eventually grow into adult jellyfish. The ephyra are part of the life cycle of the class Scyphozoa which are characterized by the general cup-shape of their bell, 4 part symmetry, lack a defined pharynx, and lack a tissue self (velum or velarium). Scyphozoa live in marine habitats as free-swimming organisms and feed on food particles to fish or other jellyfish depending on the size of the scyphozoan. They have no digestive tract so food and waste passes through the same opening. Food is caught on the tentacles and oral arms by stinging cells called nematocysts. Some species of scyphozoa are solitary in their life while others travel as large groups known as a smack.

The Role of Scyphozoa in the 21st Century

Jellyfish are an important part of the world’s ecosystems. They are a key prey species for sea turtles and ocean sunfish. While we need stable populations of jellyfish to have a healthy, stable, and diverse ecosystem, anthropogenic effects can greatly influence their populations to have a negative impact. We have the ability to either push them to extinction or facilitate population blooms that can devour everything in the way, leaving all other organisms too big to be consumed by the jellies to starve to death (a perfect example of this devastation is the case of the Black Sea). With too many jellies, their populations can be a major influence in the collapse of ecosystems worldwide. More and more frequently around the world, great smacks of jellyfish come forth to scour the waters and consume everything they can (comb jellies alone can eat 10 times their body weight in a day). They are collapsing fish stocks, clogging fishing nets/nuclear power plant pipes/beaches, stinging (and in some cases killing 20 to 40 people from box jellyfish annually in the Philippines alone) people, damaging tourist economies, and many other forms of damage. Because of human caused marine habitat degradation, pollution, over-fishing, and warming ocean temperatures due to global warming, we are the reason these jellyfish hordes are increasing in size, duration, and frequency. The question now is how can we contain what we have birthed, or if it has grown beyond any point of our possible control. 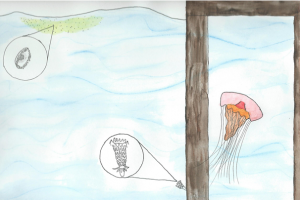 Schyphozoa smacks are a common occurrence throughout the marine habitat, yet there has been a recent increase in their size and rate of occurrence. This poses a problem for fisheries and ecosystems throughout the world and may be the result of human influence. In a paper titled “Unusual Population Explosion of the Giant Jellyfish Nemopilema nomurai (Scyphozoa: Rhizostomeae) in East Asian waters”, the authors note that there has been large population blooms in 2002, 2003, and 2004. While there have been blooms in the past such as in 1920, 1958, and 1995, the 2000’s blooms are the first ever recorded times those increasing populations have been noted in consecutive years.

The authors focus on the population increases happening in the Sea of Japan and mention that similar phenomenon have been observed in Korean coastal waters. They tie these events to similar blooms that have occurred around the world (Gulf of Mexico, Black Sea, Bering Sea) and how these blooms were the demonstration of environmental and/or ecological changes resulting from a variety of factors. In order to determine possible causes for the unusual mass occurrences, the authors constructed the seasonal life cycle and geographical range of N. nomurai through numerous field and laboratory studies.

They collected data through interviewing local fishermen and divers, visited bloom spots to count individuals, and collected specimens for rearing and experimentation in the lab. In the lab, they experimented with altering the temperature of the water the jellyfish scyphistomae were in. When they increased the water temperature, it triggered strobilation at an increased rate. With the results from their experiments and data collection, they believe that both recent ecosystem change and annual hydrographical conditions in/around the core habitat of Nemopilema  nomurai may be responsible for the frequent bloom occurrence in the Sea of Japan.

It has long been suggested that marine habitats are more species poor in regards to fauna then terrestrial or freshwater habitats. This is attributed to the fact that planktonic species have a very high and distant dispersal rate throughout the homogenous oceans and encounter very few blockages of gene flow. In the marine environment, there are not as many situations in which divergent genetic development (new species) occurs in order to adapt to a new situation as happens on land.

This concept is facing some contradictions though in the face of the discovery of cryptic species present in the Aurelia genus. In an article titled “Molecular Evidence for Cryptic Species of Aurelia aurita (Cnidaria, Scyphozoa)”, the author discusses how the genus was originally thought to only be comprised of two species. Yet through the use of DNA sequencing, the article notes that there is nine known species. Since this article has been written, that number has increased to at least 13 known species of Aurelia discovered with many more still not described (Fofonoff, 2003). Keep in mind that Aurelia is considered to be the most thoroughly studied species of the scyphozoa class, yet these cryptic species divergent of the originally assumed only two species shows that marine fauna is more taxonomically rich then we one thought it to be. The author discusses how the presence of breeding aggregations within isolated inlets limits the gene flow among populations of Aurelia and thus results in the development of genetically unique species. 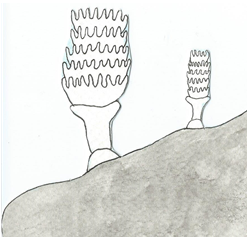