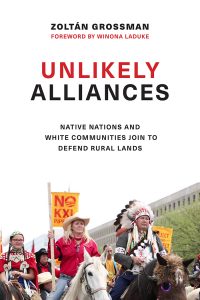 As Native nations have asserted their treaty rights and sovereignty, they have confronted a “white backlash” from their neighbors fearful of losing control over the land and natural resources. Farmers, ranchers, and fishers have at times been virtually at war with Native peoples over treaty resources such as fish and water. Yet faced with an outside threat to the common environment—such as a mine, dam, bombing range, coal train, or oil pipeline—some communities unexpectedly joined to protect the same resources. Strong rural alliances of Native peoples and their white neighbors, such as the Cowboy Indian Alliance, came together in areas of the U.S. where no one would have predicted or even imagined them. Some regions with the most intense and violent conflict were even transformed into the areas with the deepest cooperation to defend sacred lands and water.

Unlikely Alliances explores this evolution from conflict to cooperation through place-based case studies in the Pacific Northwest, Northern Plains, Great Basin, and Great Lakes, from the 1970s to the 2010s. They suggest how a deep love of place can begin to overcome the most bitter divides between Native and non-Native neighbors. They offer lessons about the complex interplay of particularist differences and universalist similarities in building populist movements across lines of racial and cultural identity. They also show how “outsiders” can be transformed into “insiders” by redefining a contested local place as common ground. In our times of polarized politics and globalized economies, many of these stories offer inspiration and hope.

Zoltán Grossman is professor of geography and Native studies at The Evergreen State College. He is a longtime community organizer and coeditor of Asserting Native Resilience: Pacific Rim Indigenous Nations Face the Climate Crisis. All royalties from Unlikely Alliances go to the Seventh Generation Fund for Indigenous Peoples. 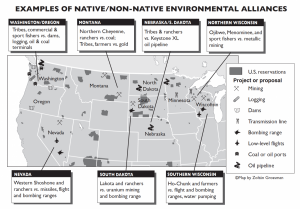 “When Indigenous peoples united with ranchers and farmers to stop the Keystone XL pipeline, they blazed an electrifying new path away from climate catastrophe. Such alliances to defend land and water have been taking shape for decades―and they have much more to teach us. Grossman draws out the key lessons from these stories with great skill and care.”
―Naomi Klein, author of This Changes Everything and The Shock Doctrine

“Tribal nations’ fight for treaty rights has always been on the frontlines. We will build bridges with our neighbors to find common ground, but cannot compromise our future. As place-based societies, we can no longer allow business as usual.”
―Brian Cladoosby (Speepots), Chairman, Swinomish Tribe

“Unlikely Alliances demonstrates that our ongoing fights for climate justice are not isolated struggles, but are founded upon a legacy of collaborative resistance. This book is an essential read for all organizers, water protectors, and land defenders who wish to build healthier, more sustainable communities and native nations.”
―Dallas Goldtooth, national organizer, Indigenous Environmental Network

“A broadly comparative work that will be helpful for identifying approaches that lead to workable alliances between neighbors, and for highlighting recent successful Native strategies to assert control over significant natural resources.”
―Lisa Blee, author of Framing Chief Leschi: Narratives and the Politics of Historical Justice

“Unlikely Alliances offers a prescription about how cooperation between rural Native and non-Native communities and environmental organizers can be extended and encouraged. It is intended as a roadmap for the future, based on past experience.”
―David Rich Lewis, author of Neither Wolf nor Dog: American Indians, Environment, and Agrarian Change

Writings and presentations by the author