The Chemistry Behind Cannabis: Terpenes 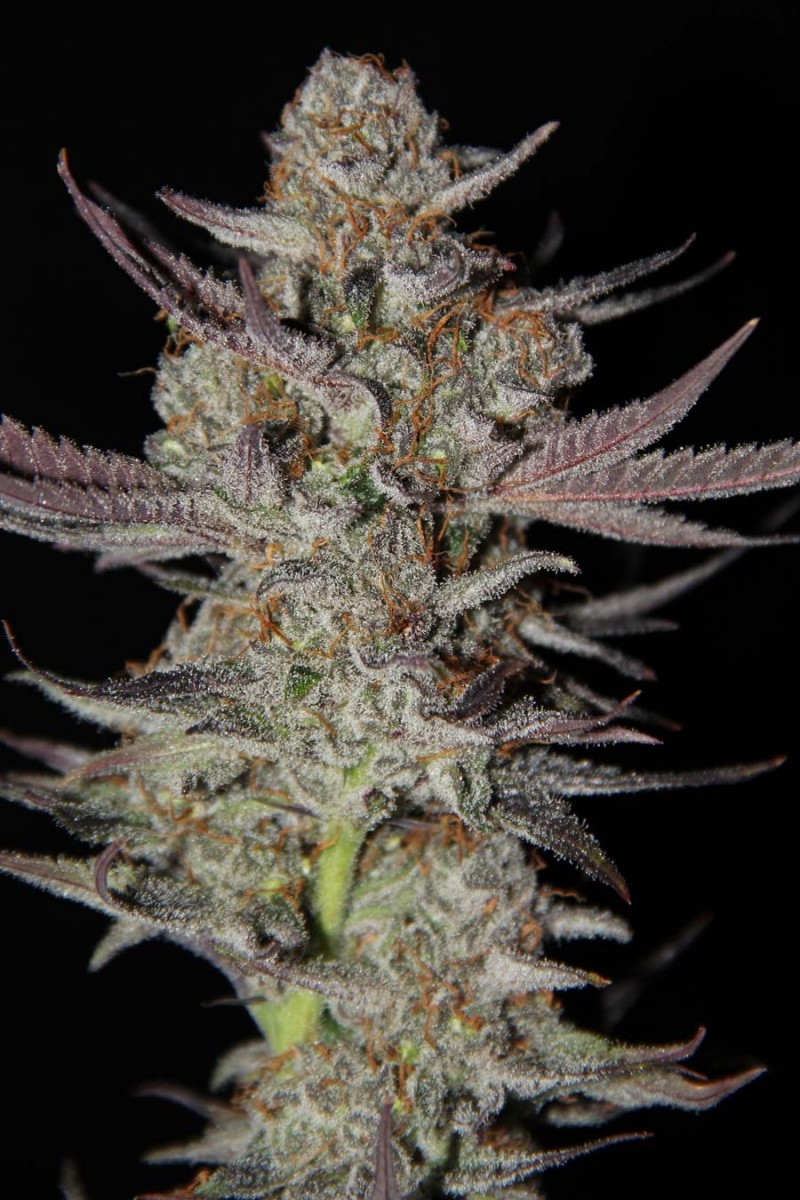 With more and more States legalizing medical and recreational marijuana, advanced research dedicated to understanding the chemical and medicinal properties of Cannabis is rapidly expanding. So far there has been pretty extensive research in regards to the medical benefits of active cannabinoids such as cannabidiol (CBD) and tetrahydrocannabinol (THC); however, much less information is known about terpene profiles and their contributions to the aroma, flavor, and medicinal properties of Cannabis. Terpenes found in all land plants can act as defense compounds, toxins, and as feeding deterrents to predators in an attempt to ensure plant fitness. However, terpenes also function as secondary metabolites in which certain compounds can be selectively cultivated, extracted, and implemented for specific properties and effects.

Due to different cultural and historical backgrounds, Cannabis is viewed through very polar perspectives depending on one’s upbringing. For instance, many people only associate the plant with its recreational drug use and view it in a condescending light whereas other cultures have used the plant for food, fuel, clothing, shelter, and medicine primarily in the cultivation of hemp for fibers and the resins and buds of female Cannabis plants for medicinal herbs, tinctures and salves (Craker et al. 2010). Cannabis has a very long history of cultivation and utilization that started primarily in Central Asia and the Himalayans, but it soon spread to various tropical and temperate regions throughout the globe. The earliest uses of the plant were mainly cultural applications for food, medicine, and fiber (primarily of the female plants), and as popularity rose, trade between nations started, and techniques to maximize the potential for feminization of plants spurred the desire to cultivate and breed strains for their medicinal properties (Craker et al. 2010).

Cannabis plants that grow in the wild, when compared to intensive cultivation, produce much less oils, resins, and fibers. Controlled cultivation has the potential to significantly increase the potency of cannabinoid and terpenoid concentrations and; therefore, the efficacy of all these compounds the plant has to offer will skyrocket, primarily due to intensive maintenance on the soil nutrient composition to completely fulfill the plant’s needs (Craker et al. 2010). Even though historical uses and applications of Cannabis may vary between regions and cultures, there was a common desire to cultivate the plant in a way that would maximize its resin and fiber production, especially in regards to the female plants who have the most potent concentration of resins and oils.

While all cultures who have adopted Cannabis cultivation have done so for a multitude of different reasons, within the history of the United States it has been primarily bred and grown to maximize oil and resin production, and therefore, cannabinoid composition, with even more recent attempts to cultivate high terpene concentrations for additional medical and recreational uses and benefits. Use of Cannabis has almost always been a cultural experience in the United States whether it was in association with concerts and festivals playing psychedelic rock and Grateful Dead or as a culture within itself with events like Chalice Festival and the High Times Cannabis Cup. With this long historical background behind it, alongside with it’s growing acceptance and legalization, a strong, tight-knit community was formed to work towards law reformation. This same community, while sticking together, pushes each other to truly make progress in the Cannabis movement (whether through competition or cooperation) by cultivating and processing new, diverse strains designed to have specific effects with regards to its cannabinoid and terpenoid composition. 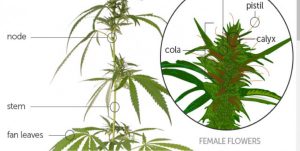 In general, all Cannabis species share a similar morphology or physical structure; however, since there is a lot of cross-breeding and experimentation with genetics in regards to Cannabis there are sometimes different structural and chemical characteristics that can affect growth and development. Features that are common throughout all species are inclusive to the fact that the plants are dioecious (however there have been cases of hermaphrodites/sex changing in which female species stop growing buds/flowers and start producing seeds), wind-pollinated, seeds that germinate quickly, and general leaf (palmately compound) and stem structures (opposite near base and alternating further up the stem when mature) (Craker et al. 2010).

The flowers or buds of the female plant are the most desired and useful parts considering their higher concentration of both cannabinoid and terpene compounds. The buds often form at the end of branches forming what are commonly known as “cola” buds. These plant structures have a much higher composition of the active compounds that are used for both medicinal and recreational purposes. While other parts of the plant including stems, sugar leaf, and fan leaf also have small amounts of cannabinoids and terpenes, some sort of extraction process (steam extraction, butane/propane/CO2, ice water, etc) is usually needed to concentrate a significant amount of these compounds to be applied usefully.

The main differences among different strains of Cannabis are typically expressed through varying heights, coloration, aromas/flavors (terpene profiles), and medical effects. Many of these differences are dependent on the genetics of the strain being grown, but environmental conditions can also significantly affect a plants phenotype. What is now becoming a major investigation in Cannabis cultivation and processing is the preservation and concentration of terpenes that are most typically excreted through secretory ducts/hairs on the buds, flowers, and stems known as trichomes. Often times, mostly in regards to concentrates, terpenoid compounds can be destroyed through harsh extraction processes with solvents like butane and propane. However, there are now practices in which the terpene contents are previously extracted through steam distillation then reintroduced to the Cannabis extracts in order to maintain high cannabinoid concentrations while preserving a strong terpene profile. 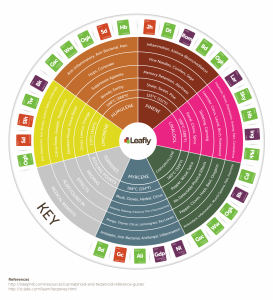 In the Cannabis genus, primarily in regards to C. sativa and C. indica species, there are over 100 different terpenes that have been identified (Rahn 2016.) However, while there are so many, only about 11 have been found at significant concentrations to allow for research, and of those, only 6 are commonly focused on. The most studied terpenes in regards to Cannabis include pinene, limonene, humulene, linalool, caryophyllene, and myrcene. Few studies have been conducted (with more surely to be done in the future) that have helped researchers associate particular terpene profiles with varying strains and cannabinoid contents/concentrations and, therefore, medical benefits (Leafly 2016).

Based off of studies on terpene profiles in Cannabis, researchers have been able to confidently derive and present figures in which certain terpenes are broken down by their aromatic/flavor profile, their medical and recreational benefits, presence in other species, and the most common strains in association. For example, limonene has been a very highly sought after terpene that provides citrus flavors ranging from lemon to orange to pineapple with aromas found almost exclusively in C. sativa strains such as Super Lemon Haze and Tangie. In addition to flavorful and aromatic associations with limonene, its essence has also been highly linked to medicinal properties used for its anti-depressant, anti-anxiety, gastric reflux stabilizer, and anti-fungal properties (Leafly 2016). While these properties and associations are relatively exclusive to limonene, each terpene that has been studied has been observed to have distinct associations with particular strains and medical applications. 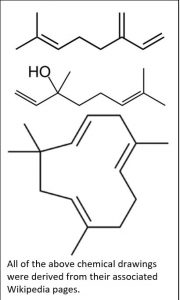 onships between terpenoids and cannabinoids. What was found is that terpene compounds, similarly to cannabinoids, have the ability to bind to specific receptors of the brain and release che
micals that can have specific effects on the user, and, more often than not, terpenes bind to the same receptors that active cannabinoids utilize (Rahn 2016.) Some terpenes are even able to monitor and restrict or enable the flow of THC molecules through the blood-brain barrier (Rahn 2016). Terpenes also have explicit effects on dopamine and serotonin receptors and can modify the rate of production of these neurotransmitters. Overall, high terpene concentrations can enhance the medical effects and benefits of the cannabinoids in Cannabis by affecting and activating the same receptors.

The primary medical values derived from cannabis are sourced from secondary metabolites including cannabinoids, terpenes, and flavonoids. A deeper understanding of the chemistry and medical potential of terpenoids compounds has the potential to unearth to new treatments in chemotherapy, antimicrobial processes, anti-depressants, spasm suppressants and much more. Breeding strains of cannabis with the intent to cultivate unique terpene profiles to complement the medical effects is wave within the current and future cannabis community that has the potential to teach us more about secondary metabolites in the medical field on a grand scale with regards to much more species than just Cannabis.

The ideal and practice of producing both Cannabis flowers and concentrates that not only have significant cannabinoid levels, but also unique terpene profiles will be one of the driving factors in the progression of both social and medical implementations. Socially, terpenes are already becoming a huge factor in the commercializing of Cannabis now that some consumers, commonly coined as “cannaseuers”, are more interested in the terpene concentrations because preservation of terpenes often suggests that the plant was both grown and processed very well (especially in regards to concentrates). However, it is debatably even more interesting to see how awareness of terpenes will affect the viewpoint of Cannabis from a medical stand. Hopefully, as more research is done to fully comprehend the chemical properties of terpene compounds in Cannabis, there will be a social paradigm shift in which Cannabis is no longer viewed as a scheduled one drug like heroin or meth, but rather as a medicinal herb such as patchouli in which many its usage is not considered taboo.

Craker LE, Gardner Z. The Botany of Cannabis. Mother Earth Living. 2010 Nov 5 [accessed 2017 Feb 10]. http://www.motherearthliving.com/Natural-Health/botany-of-cannabis-ze0z1011zdeb. (This article was exerted from the book The Pot Book: A Complete Guide To Cannabis)

Leafly (Dr Dabber). Infographic: What are Cannabis Terpenes and How Do They Affect You? Leafly. 2016 Nov 7 [accessed 2017 Feb 9]. https://www.leafly.com/news/cannabis-101/infographic-what-are-cannabis-terpenes-and-how-do-they-affect-you.

Images of chemical structures sourced from: