Yarrow: The Healing Herb of Achilles 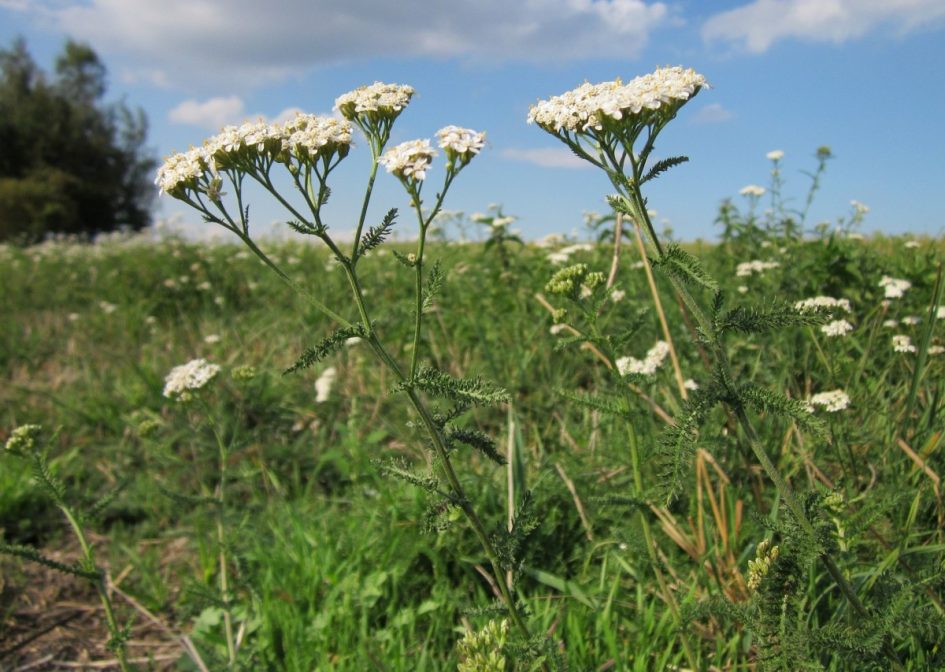 Yarrow has served as a first-aid plant for centuries, if not millenia, of human existence.  Even in this age of chemical medicine, it has lost none of its effectiveness.

In Greek myth, there was an herb of such healing renown, the hero Achilles used it to treat the wounds of his men. Today, historians and botanists agree that the herb described in Homer’s Iliad was yarrow.  Centuries may have passed, but yarrow has lost none of its effectiveness.  Like most carpenters, I am no stranger to cuts and scratches.  After cutting my finger one day, I decided to give the ancient remedy a try.  I chewed up some yarrow leaves to make a simple poultice.  After a mere hour, the wound had completely healed over! 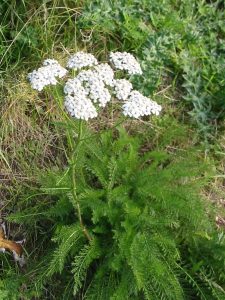 By Georg Slickers (Own work) (CC BY-SA 2.5) via Wikimedia Commons

Common yarrow is such a ubiquitous herb that it is often thought of as a weed.  Fairly easy to identify, yarrow has feathery leaves and clusters of tiny white flowers.  It bears the Latin name Achillea millefolium, after Achilles and the Latin for “thousand-leaved” (Small 1999).  For more information on the growth and uses of yarrow, click here.  It is a member of Asteraceae, the plant family that includes aster, sunflower, and many other flowers (Achillea 1996).  In this blog, there are more profiles of this family here under “Asteraceae.”
Yarrow grows native across the northern hemisphere from Asia, through Europe, and across the America’s (Achillea 1996.)  As widespread and effective as this herb is, it has been used by many cultures around the world. Pollen from yarrow has even been found in ancient burial caves, suggesting that humans have been using yarrow since prehistoric times (Small 1999)!  Throughout its native range, people have used it for its medicinal properties. These uses include: stopping bleeding, treating fevers, diarrhea, dysentery, and hypertension. It has also been smoked, used as a hair rinse, and used to repel insects (Small 1999).
Modern science has confirmed many of yarrow’s traditional medicinal properties.  Its healing ability comes mostly from the alkaloid achilleine, which helps wounds heal over by encouraging blood clotting.  One study found that just half a milligram of achilleine per killogram of body weight can reduce the time it takes a wound to clot by 32% (Miller 1954).  Also helpful for first aid are its antimicrobial properties, which can be traced to terpenes in its essential oil.  For more information on the different classes of chemicals plants produce, click here.  Yarrow has also been found to help reduce spasms, lower blood pressure, reduce fever and inflammation, and promote digestion, menstruation, and sweating (Chevalier 2016). With all of these properties, it is no wonder so many cultures have used yarrow! 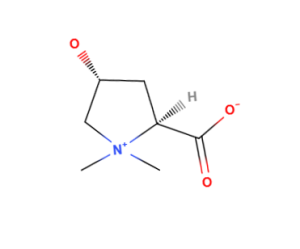 Miller FM, Chow LM. 1954 Mar 5. Isolation and Characterization of Achilleine. Departments of Chemistry and Pharmaceutical Chemistry of the University of Maryland .