For all my fellow female warriors, population producers, goddesses, and gender-non-conforming individuals with a menstrual cycle, it’s tough out here. With the pink tax still at large and the current political state the way it is, it’s time to start enlightening ourselves to the beauties of holistic medicine and natural products for our bodies. Whether its using Feverfew (Tanacetum parthenium) for hormone induced migraines, Yarrow (Achillea millefolium) to slow your flow, or Guelder-rose (Viburnum opulus) for cramps, nature is our pharmacy and has been treated as such for centuries. While some women may not want to reproduce or increase their fertility, they might want to take control of their reproductive rights. For both of these, a plant called Vitex agnus-castus does the job. 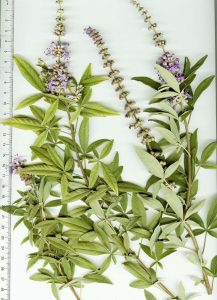 Vitex agnus-castus, otherwise known as chaste-tree, monk’s pepper, or Abraham’s balm, is a deciduous shrub or small tree thats known for its fragrant, beautiful terminal panicles of lavender blooms (Gilman and Watson 1994). For centuries it has been used as a female remedy for regularizing monthly periods, endometriosis, anxiety, PMS, anti-aphrodisiac, and a whole slew of other (some male) related ailments. Legend has it that Roman wives used the plant as an anti-aphrodisiac by rubbing the leaves on their genitals or placing it inside their bed lining while their husbands were away (Arokiyaraj S et. al, 2012). It received its common name “Monk’s Pepper” from the Middle Ages  when monks would use it as a spice to help them maintain celibacy.

The Secret Behind the Magic

The chemical structure of Agnuside

There are two chemicals of interest in this species that make it so magical: agnuside and aucubin (Duke 1992). Agnuside has many known medicinal properties and is currently still under study. The latter, aucubin, is known as a common compound in Asterids; and its biological activity is more ecological in nature. Both compounds are stored and emitted from the leaves of V. agnus-castus (Duke 1992).

Agnuside, found in and named after the plant, is the major component behind the plants healing capabilities. This impressive plant helps with many female reproductive issues because of its ability to normalize the amount of progesterone in our bodies (Dogoua et al. 2008). Progesterone is one of the hormones in our bodies responsible for stimulating and regulating things like maintaining pregnancy, monthly menstruation, and helps prepare female bodies for conception (Goldstein 2017). 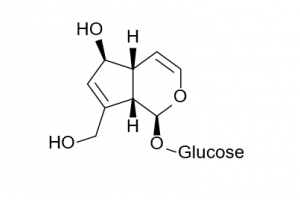 The chemical structure of Aucubin

Female bodies go through a luteal phase where the lining of their uterus thickens up to prepare for a possible pregnancy (for a more in depth look click here). A german study discovered that agnuside bides to the dopamine2 receptors in the anterior pituitary and decreased secretion of prolactin (Feeny 2016). By decreasing prolactin, progesterone production increases during a woman’s luteal phase and also increases luteinizing hormone. This hormone is what signals the body to release an egg.

Vitex agnus-castus also contains a chemical compound called aucubin, which works as a defense mechanism towards generalist herbivory by decreasing its enemies growth. However, the opposite effect was observed in a study done by Chang and Yamaura where they observed that aucubin exhibited significant protective activity against  a very common poisonous mushroom (Amanita spp.) intoxication in beagles (Chang and Yamaura 1993). 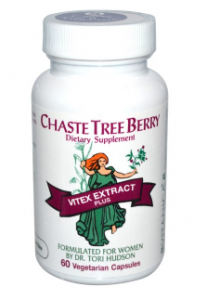 This herb can be beneficial for women trying to become pregnant or regulate their menstrual cycles. Vitex has no known side-effects and can be taken for up to 18 months continuously, but should be stopped if you become pregnant or are on prescription fertility drugs. You can buy it at your local herb shop, food co-op, or supplement store in capsule form. If you are not fond of capsules, you can also take it in a liquid from as a tincture or use the dried herbs for tea.

A Word of Caution for My Fellow Fertile Myrtles

For all the fertile females out there, chaste-tree may be used to delay or shorten your monthly visits from Aunt Flow, but it can also keep her away for good if not used alongside other forms of birth control. V. agnus-castus is like a helping hand for fertility, so be cautious if you are sexually active and also enjoy your freedom. If you are looking for an herbal form of birth control, this is not the answer. Other plants such as Queen Anne’s Lace, Blue Cohosh, and Neem may be taken as natural forms of birth control, but I do not advise taking any of these without a medical/herbal providers guidance. A more in depth article on The Ecology of Estrogen in the Female Body can be found here if you wish to learn more about you and your great grandmother’s reproductive health history.

Previous generations of women did not eat out of plastic packages, tupperware, or water bottles, and neither should we. As wonderful as it would be to say that diet and lifestyle has nothing to do with our reproductive health, but it does in a very big way. Many whole foods contain phytoestrogens that work by binding to estrogen receptor sites (Patisaul 2010) and essentially work as agnuside does by increasing progesterone and balancing estrogen levels, easing menopause, endometriosis, and PMS symptoms. Eating a more organic, whole foods diet like our great grandmothers did can increase your intake of natural phytoestrogens, and avoiding human-made endocrine disruptors like pesticides, plastics, and various packaging material will benefit your reproductive health in the long run.  I recommend watching The Human Experiment (2013) for more information on chemicals in consumer products and their effects on human bodies.

Duke, James A. 1992. Handbook of phytochemical constituents of GRAS herbs and other