Above: Turmeric rhizome by Simon A. Eugster (Own work) via Wikimedia Commons

Turmeric, the rhizome of the Curcuma longa plant, has been an integral component of many cultures for thousands of years. A vibrant dye, revered ceremonial symbol, and a powerful healing herb, turmeric has a colorful history and a bright future.

Popularly known for its bright orange-yellow color, the rhizome of the turmeric plant has been used for centuries to dye textiles a beautiful golden hue. In traditional Hindu weddings, the groom ties a yellow string tinted with turmeric around his wife’s neck, signaling her ability to watch over her household (Avey 2015); a whole chunk of turmeric is sometimes worn around the neck to ward off evil (Avey 2015). The powdered form, a staple in Indian cooking, is also revered in some Hindu temples in benediction ceremonies (Prabhakaran Nair 2013). Historically turmeric was used as a food preservative, as it contains powerful antioxidant and antibacterial properties (Aggarwal et al. 2015). Aptly-named jayanti ( “one who is victorious over diseases,”) in  Ayurveda writings (Avey 2015), turmeric has long been praised for its anti-inflammatory properties. Ancient Indian and Chinese healers treated a wide range of ailments with this spice, including indigestion; general aches and pains; menstrual pains; and to lighten the appearance of scars (Aggarwal et al. 2015). In Nepalese medicine, turmeric powder is applied to abrasions, cuts, bites, and sprains to reduce inflammation and accelerate the healing process (Chattopadhyay et al. 2004). Turmeric also has astringent properties, used in Hawaii to treat sinus and ear infections (Alter 2017).

Like its cousin ginger, Turmeric is a tropical plant that originated in southern India, as a hybrid between wild turmeric (Curcuma aromatica) and another native plant.  It is a seedless plant and therefore its expansion across Asia and Africa is due entirely to its cultivation by humans (Bunting 2014) and the plant is not known to exist in the wild. 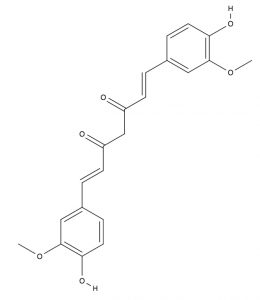 The active ingredient in turmeric that gives the rhizome and derived powder its vivid orange hue is curcumin: a hydrophobic, polyphenolic compound also called diferulomethane. A powerful antioxidant, curcumin scavenges and neutralizes free radicals—destructive compounds produced by normal metabolic processes and picked up by the body in less-than ideal environments (Prabhakaran Nair 2013). Curcumin is responsible for the inhibition of many inflammation-causing enzymes (Aggarwal et al. 2015) and has been shown to prevent the development of diabetes in at-risk individuals by reducing blood sugar and improving insulin sensitivity (Chuengsamarn et al. 2012). Perhaps the most impressive and promising ability of curcumin, however, is its anti-cancer potential. In addition to fighting cancer progression with an anti-inflammatory approach alone, curcumin has been found to impede the continuation of the cell cycle and induce apoptosis—the programmed death of cells (Chattopadhyay et al. 2004). In lab studies on rodents, curcumin treatment prevented subjects from developing gastric or colon cancer by suppressing the group 1 carcinogen Helicobacter pylori (Mahady et al. 2002).  While much more research needs to be done on the healing qualities of curcumin and its producer turmeric, it is clear that this plant has countless powers that we are only beginning to unlock and benefit from.

Try some turmeric-based home remedies yourself! More than just a great flavoring additive, turmeric powder can be used in face masks, cold-curing teas, anti-inflammatory drinks, and even toothpaste!