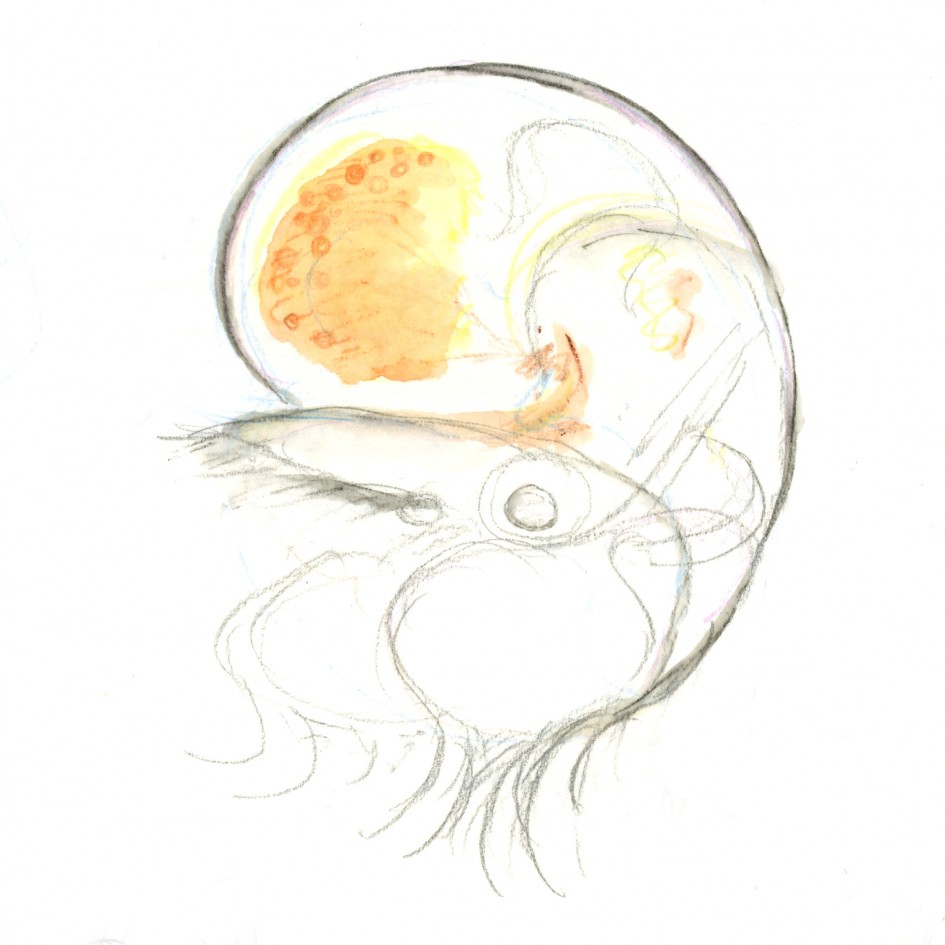 Figures 1 and 2 are sketches of a gastropod larva in the 2nd larval stage, or veliger, of some species of snail. They hatch at sea and can spend anywhere from days to months floating among other plankton as they grow and develop (Craig M. Young et al.). Like adult snails, they possess a spiral shell and a “foot.” However, their shell is composed of proteins, not calcium carbonate, and their foot is not yet capable of providing transportation. In addition, they have two ciliated appendages used for locomotion and catching plankton to feed on (Heller, Joseph). These two sketches of a veliger show its food source, albumen (the remnants of its egg), that will allow it to survive without food for a while.

An animation displaying movement of a veliger via the cilia on it sails, and some basic anatomy of the veliger. Once a veliger is ready to undergo metamorphosis, it requires certain conditions to start the actual process. The conditions that trigger metamorphosis differ from species to species–some may sense the presence of chemical compounds produced by the organisms the adults of their species feed on, and those that live in colonies as adults might be attracted to groups of their species by chemical signals (Heller, Joseph). If the veliger finds a location with suitable conditions, it descends to the ocean floor and settles. It then proceeds to deconstruct and consume or absorb its sails. This process will require only 10 to 20 minutes, removing the sails and reshaping the veliger’s head. After this, the veliger has become for all intents and purposes a fully-functioning adult, if a miniature one. Littorina littorea, also known as the common periwinkle snail, is a sea snail found in intertidal habitats and estuaries in Europe and on the West and East coasts of North America. As omnivorous grazing organisms, they mostly consume algae, detritus, and small organisms like juvenile barnacles. They possess dark grey, brown, or black conical shells with a smooth surface, and can be from 1/4 of an inch to 1 inch long. Periwinkle snails can fall prey to sea stars, whelks, and fish. After death, their shells are sometimes inhabited by small hermit crabs (Environmental Data Center, The University of Rhode Island).

These snails have separate sexes and are not hermaphroditic like some snail species. The eggs are fertilized while still inside the female, then laid in capsules that drift out to sea with the spring tide. The eggs hatch as veliger larvae in a few days.

Periwinkle snails are commonly eaten in coastal areas of Europe and as a delicacy in some African and Asian areas. They are an important shellfish export in Scotland, and have been consumed in Scotland for thousands of years. They can be prepared by boiling them in seawater, then fishing the edible snail out of the shell with a pin (Arkive.org).

As stated in one of the journals cited below, The Case History of the Marine Snail Littorina littorea, there has been debate over whether Littorina littorea is an introduced species in North America or if it was present before European settlers arrived. This can be hard to determine, since settlers introduced many species before marine biology was a large concern. However, evidence indicates that the snails were introduced, whether for food or incidentally in rock ballast (John W. Chapman et al.). Their presence has been fairly damaging to coastal areas in North America—they displace native species and have reduced available algae.

Sea snails go through an interesting transition—they give up their speedy, tiny, sailed forms and their free roam of the open seas for a safer, if slower, life on the shore. I think they have a sort of air of perseverance and steadfastness, slowly pulling their heavy homes behind them, lurching spirals sliding over rock. Perhaps they can teach us much can be done with help and hard work. Periwinkles are dedicated little scrubbers of the seashore, greatly altering the landscape they were introduced to with an army of tiny, abrasive tongues.