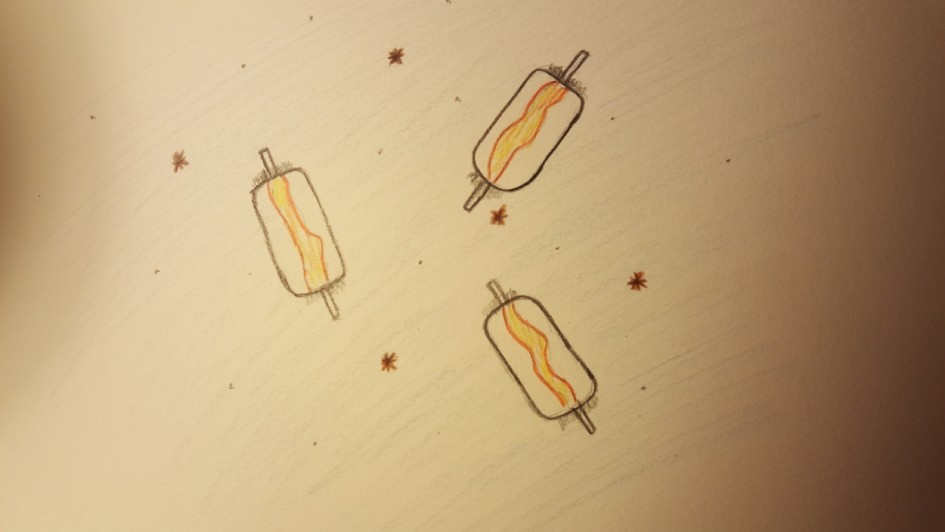 Ditylum are solitary cells that are sometimes found in small chains. From one view they are rectangular but from another view they are slightly triangular. The corners are often round, giving them a cylindrical type look. They have a spine that extends through the center of each one and sticks out both ends. The chains are connected by these spines. The spines are also surrounded by a marginal ridge. Their cells are yellow-brown in color and have chloroplasts in the center. The chloroplasts are small and numerous, and the cell wall is slightly silicified. They are essentially a long hollow tube. This species is easily identifiable. There are no similar diatoms, they can be identified by the two large spines on its rectangular body. Ditylum can be found worldwide. The only place they are not found is the polar oceans. Ditylum use sexual reproduction. The sperm and the egg are produced by the same cell.

Ditylum are indicative of cooler, more nutrient-rich waters. Their cells are sensitive to plasmolysis, which is the process in which cells lose water in a hypertonic solution. When this species blooms, there are many genetically different populations with different exposures to light and silicic acid. There are no known harmful effects. Drawing of the transparent insides and sizing of the Ditylum.

There have been many studies and experiment involving the Ditylum. There is a study from J. W. Rijstenbil et al, on oxidative stress induced by copper. The cells were subjected to oxidative stress induced by the copper, in the presence of zinc. “Oxidative stress in aquatic organisms is a normal phenomenon, caused by a number of natural external factors, but it can be promoted by some pollutants.” (1) Copper is a very toxic metal because of its oxidative potential. In this experiment, they wanted to see how the Ditylum were affected by an increase of Copper. They predict that because the Ditylum have a poor defense against metal toxicity, they will be affected and suffer from oxidative damage. They ran two different tests in cultures with zinc. One had a zinc level of 40nM and the other was 140 nM. In their results they found that when they increased the Copper, the Ditylums sexual reproduction increased. There was also an increase in deformed cells. In the discussion at the end of the experiment, Rijstenbil et al concluded that increasing the copper levels affected the cell structure. A lack of antioxidant defense can cause oxyradical damage in the chloroplasts. In summary, a long term exposure of copper did not increase the Ditylum tolerance to it. The copper eventually caused a loss in photosynthetic capabilities, enlargement, and breakage of cells. Floating Ditylum in the ocean waters.

There is another study by P. K. Bienfang, and J. P. Szyper. There study was on the effects of temperature and salinity on sinking rates of the centric diatom Ditylum brightwellii. Bienfang and Szyper wanted to test the organisms sinking dynamics because it centers around the vertical flux of organic material in the sea. What they found was this; there is little reason to think that the phytoplankton sinking rates will differ in bodies of water that have different temperature and salinity because the water density changes so much. The buoyancy variations shown at the extremes of temperature and salinity ranges appeared to be in response to stresses to cellular metabolism. The linking between mankind and the phytoplankton Ditylum.

From studying this organism, I have learned about independence and leaving the “group” for the better good. I think that symbolically for humans we could learn something from this organism. The Ditylum does not generally stay stuck together, or in groups. They break apart and live on their own in a way. I think that we should try this ourselves. We should try branching out on our own. We should not depend on each other so much for “survival.” On the other hand, maybe the Ditylum aren’t split up by choice. What if they get knocked around and break apart. Maybe their survival strategy is to stick together. I think either way we could learn a moral lesson. We can use each other to help ourselves grow, but in the end we can’t rely on anyone but ourselves. I think this organism represents us. Even though they are micro organisms, they still play a big part in our world. They are a community all on their own, with enemies, environmental issues, and families. We are not much different.

Ditylum being broken apart by a passing copepod.