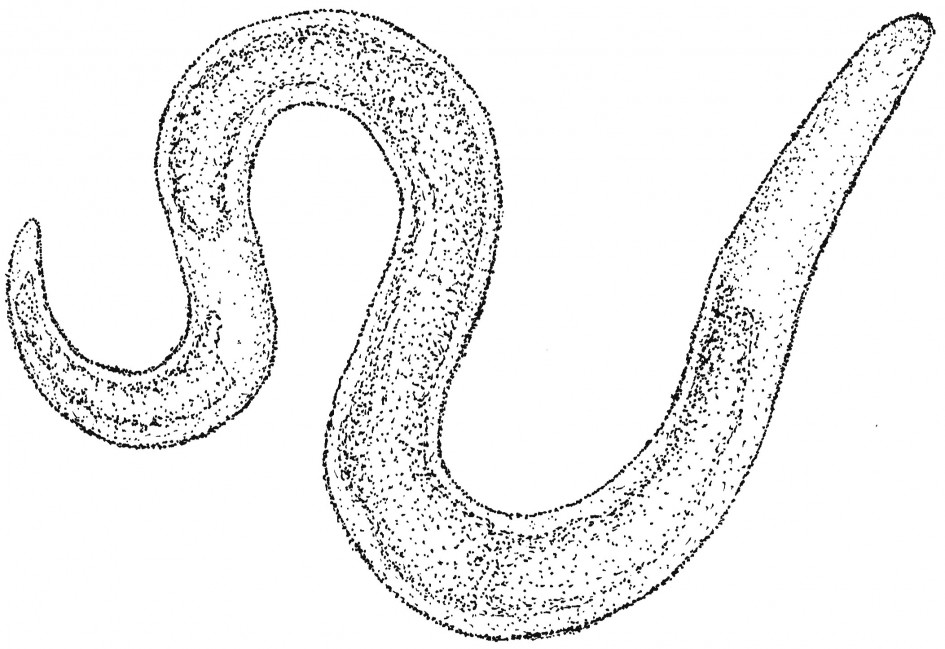 In areas with large amounts of detritus it is common to find many types of marine organisms feeding, however nematodes are the most commonly found type of benthic meiofauna. Nematode populations can reach densities up to 20 million individuals per square meter and there are an estimated 1 million individual species (Semprucci, 1). The phylum Nematoda is the most abundant representative of multicellular life in marine sediments and is represented by several genera (Warwick, 282). They play a crucial role in enhancing the rate at which bacteria is decomposed due to their inefficient feeding habits, only converting approximately 1% of the detritus that they eat into actual biomass (Warwick, 282). Nematodes, specifically Diplolaimelloides bruciei, are crucial players in the process of decomposition for both algal and plant species. Systems with marsh vegetation or mangrove leaves specifically are dominated by the genera Diplolaimelloides and Diplolaimella (Warwick, 283).

Despite the abundance and diversity of nematodes, or perhaps because of it, nematode taxonomy remains imprecise. Often only juvenile or female specimens will be collected, making it difficult to identify the species. The result of this challenge is that often nematodes are only referenced by genus, making it extremely difficult to create a comprehensive map of distribution. (Semprucci, 1). One example of these gaps in knowledge is found in the Italian seas, which are known to be home to over 400 known species of nematode. This diverse species population comprises a quarter of marine species in European seas. Despite the impressiveness of these numbers, they are actually figures from studies conducted in the beginning of the last century. There is a lack of recent data relating to this vast genera of life and very little is known at the species level (Semprucci, 2). The paper “Marine Nematodes from the Shallow Subtidal Coast of the Adriatic Sea” attempts to address this issue by studying the number of free-living marine nematode species on the coasts of the Marches region in Italy (Semprucci, 1). The author accomplished this study by collecting a total of 15 sublittoral samples as well as two additional sediment samples from each of the three sites on the Marches coast of Italy, and then fixing the nematode specimens in a 7% magnesium chloride aqueous solution before using a 4% formaldehyde solution (Semprucci,2). Roughly 100 nematodes were kept from each sample and were identified with a light microscope. In total 84 species of nematode were recognized and their distribution seems to be heavily influenced by the sediment type, with different species preferring different sediment types (Semprucci, 3).

This study highlights the ‘taxonomic crisis’ surrounding nematodes and other meiofauna due to the lack of biodiversity surveys being conducted over the last few decades. Much of the information concerning this vital portion of the marine ecosystem only references common or ecologically important species, with lesser known species receiving partial or no coverage.(Semprucci, 4). The paper concludes with a rallying cry in support of ‘biodiversity investigation’ with the goal of creating a comprehensive checklist of organisms to be used in influencing future conversational efforts (Semprucci, 4).

Another study, “Correlation between nematode abundance and decomposition rate of Spartina anglica leaves”, pursues “biodiversity investigation” in the Stroodorpepolder salt marsh in The Netherlands by attempting to determine which nematode species are responsible for the decomposition of falling leaf litter that reaches the sediment floor (Alkemade, Wielemaker, and Hemminga, 293). This study was preformed by filling mesh containers with S. anglica leaves that were either fresh cut or aged, and then placing them in a tidal inlet located in the Stroodorpepolder salt marsh. The containers were collected four months later, the nematodes counted, and the containers replaced for four consecutive seasons (Alkemade, Wielemaker, and Hemminga, 294). When the data was totaled there had been a total of sixty individual nematode species found, most appearing in each of the samples. Although the total numbers did not very significantly between the studies, the composition of species did vary. Bacterivorous nematodes, including Diplolaimelloides bruciei, were shown to dominate the population in containers where decay was most advanced at the outset of the experiment (Alkemade, Wielemaker, and Hemminga, 295). The experiment also showed that this dominance was seasonal, with specific species of nematodes being more prevalent in some seasons over others. The exception to this seasonal dominance being winter, during which there was no correlation found between population and decay. It is likely that this increase in bacterivorous nematodes is a response to the growing bacterial population within the decaying plant matter (Alkemade, Wielemaker, and Hemminga, 298). Expanding on this research is is a study titled “Population dynamics of Diplolaimella bruciei”. As shown in the previous study, this D. bruciei is known to inhabit salt marshes in Europe, and is a dominant force in the process of decay for the marsh plant S. anglica. In a continuation of this research, the scientist conducted a lab experiment designed to show the rates at which nematode population is reduced by flooding. The experiment used S. anglica leaves at different stages of decomposition and simulated natural flooding four times a week. By determining the number of nematodes washed away from the leaf litter and comparing it to the population growth rate of the remaining nematodes, the researchers were ably to analyze their population dynamics (Alkemade, Wielemaker, Herman, and Hemminga, 281). They also determined that although the birth rates on both yellow and brown leaves were approximately equivalent, the proportion of nematodes washed off the brown leaves by the flooding relative to their population density was 4.4 times higher then on the yellow leaves (Alkemade, Wielemaker, Herman, and Hemminga, 282). The lack of information relating to this rich group of species is indicative of larger gaps in human knowledge. Nematodes play a key role In marine decomposition and are extremely plentiful and wide ranging. For collective human knowledge to not have a better understanding of how to identify, culture and categorize implies a lack of research in a field that has ample room for exploration. There are several possible reasons for a lack of advancement in the field, It could be that there isn’t a strong enough motivator, financial or otherwise, to encourage wide spread research. Or perhaps it isn’t deemed truly necessary to understand more then the general ecological roles of the major species. Either option could indicate a lack of focus due to a strong anthropocentric view of the world.