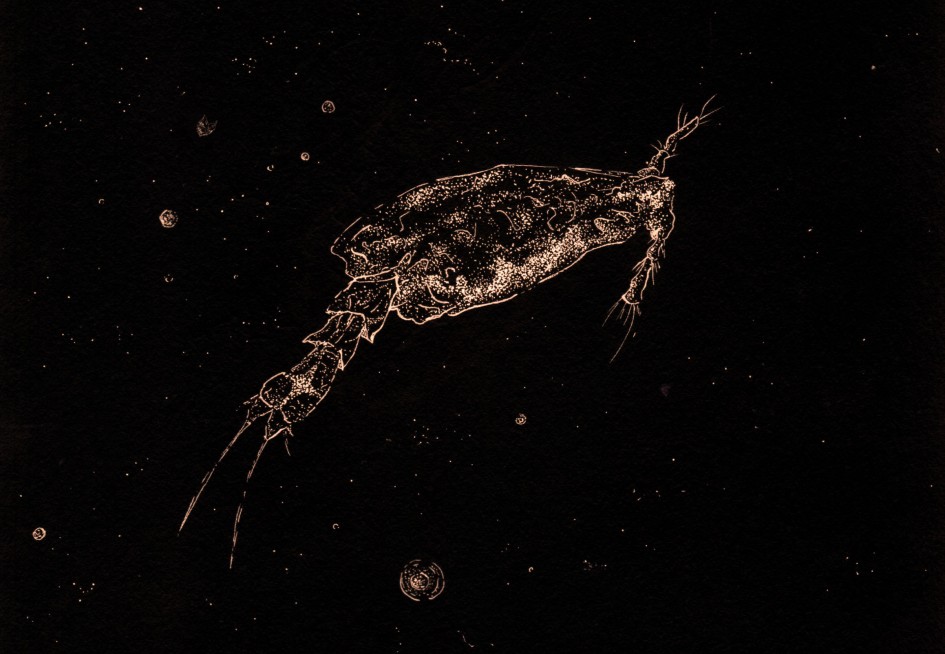 Copepods are a group of small aquatic crustaceans, which include the larval forms of many arthropods, including crab, lobster, shrimp, barnacle, krill, and crayfish. Copepods have teardrop shaped bodies, translucent exoskeletons, large antennae, and single cyclopean eyes. A. tonsa are distributed worldwide, occurring in the Atlantic, Indian, and Pacific oceans, as well as the Baltic, Black, Caspian, and Mediterranean seas (Marcus and Wilcox, 2007). They can tolerate salinity ranging from 1 ppt to 38 ppt, and temperatures ranging from 0 to 30 degrees Celsius (Mauchline, 1998). They are most commonly found close to shore, often within estuaries, although they have been reported from depths up to 600 m (Marcus and Wilcox, 2007). Copepods are often used in agricultural fish production as food for the newly hatched fish larvae (Marcus and Wilcox, 2007). Fish larvae commonly feed on copepod in the wild, so they are better adapted for such consumption (Marcus and Wilcox, 2007). Male and female A. tonsa are visually distinguishable by their antennae, urosome, and swimmerets (Sbartini 1990). Males live shorter lives than females, and females can produce up to 718 eggs in their lifetime (Marcus and Wilcox, 2007). They go through six Nauplius stages before becoming copepodites, and then go through an additional six stages before becoming sexually mature adults.  A. tonsa are broadcast spawners, which means they do not carry their eggs like some copepods, resulting in easier egg collection and storage. A. tonsa has two different prey encounter strategies, which means it can change its prey capturing based on environmental factors (Kiorboe, 2014). It can capture immobile prey, known as suspension feeding, or it can sink slowly and perceive motile prey with its antenna, called ambush feeding (Kiorboe, 2014).