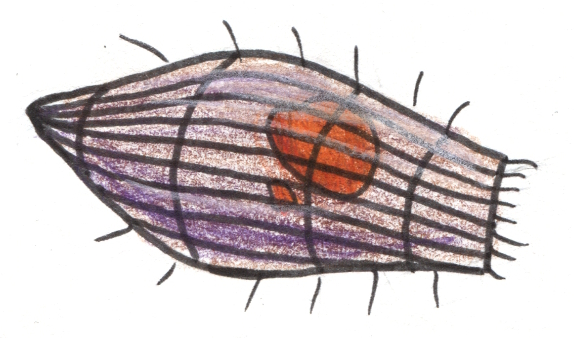 Ciliates are a group of protozoans, single-celled, heterotrophic organisms with numerous cilia. Ciliates are categorized as protists, and are related to dinoflagellates. Unlike other eukaryotes, ciliates have two nuclei: a micronucleus, which is used for reproduction, and a larger macronucleus, used for maintaining cell functions and physiology. Ciliates are generally motile, and can be found nearly anywhere on earth where water is– even miniscule amounts. Ciliates mate via conjunction, a process which involves the temporary fusion of two ciliates of the same species, which then exchange gametic nuclei. After this exchange, the ciliates separate, form new micro- and macro-nuclei (two of each) and then divide (Lynn, protozoa.uga.edu.)

The tintinnids are a class of ciliate characterized by the possession of a shell, known as a lorica. Lorica shapes and sizes are highly variable by species, but all share the same general form of a “vase” with one open end and one pinched end. Tintinnids are planktonic and primarily marine, though some occur in fresh water bodies. Marine tintinnids are primarily in the class Spirotrichea, which have a ring of compound cilia (trichia) arranged around their oral cavity. At the aboral end of the tintinnid’s cell is a tail-like peduncle, which connects the tintinnid to its lorica. Tintinnids serve as microscopic grazers among the plankton, feeding primarily on phytoplankton, and serving as food for larger organisms within the plankton (Dolan et. al., Biology and Ecology 2013.) 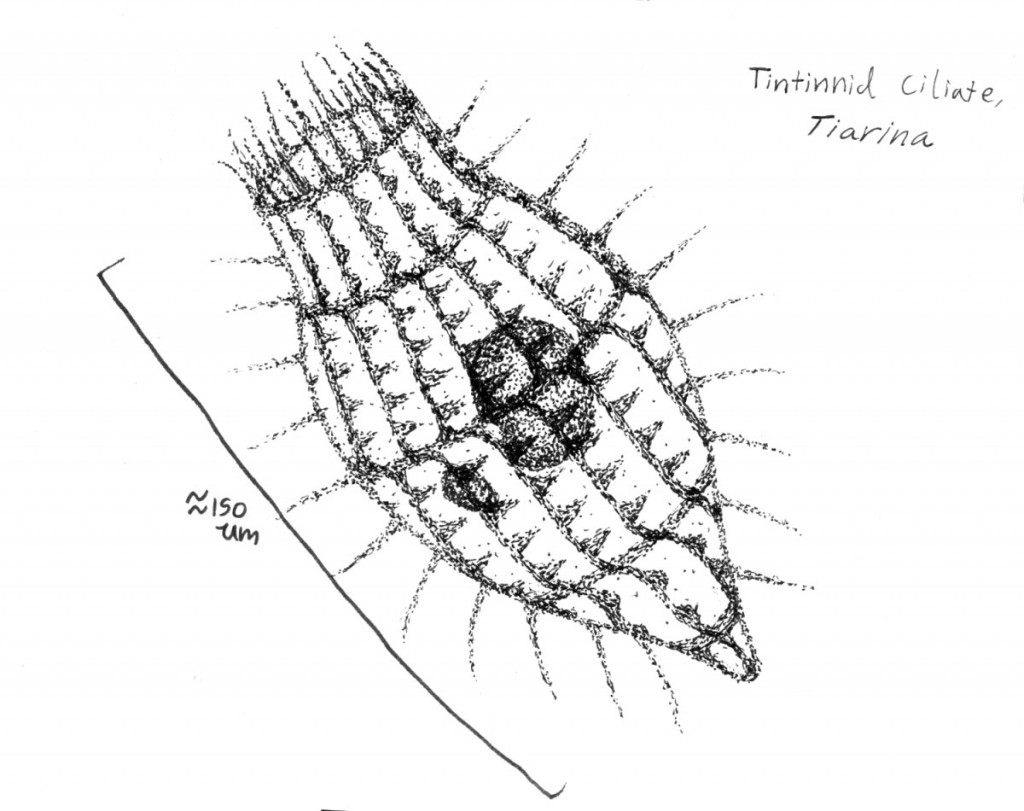 A stipple drawing of the tintinnid ciliate Tiarina. The length of the organism is approximately 150μm.

Various studies have been performed on marine tintinnid species, their diversity, and their ecology. One investigated tintinnid diversity and biomass over the course of a year. The researchers sought to determine what factors influenced diversity and biomass within Argentina’s Bahia Blanca Estuary, and took measurements of of surface temperature, salinity, water transparency, solar radiation, and chlorophyll concentration as well as tintinnid samples over the course of a year. Samples were taken from two sites on tidal flats within the estuary, one (Cuatreros Port) near the estuary head, and the other (Rosales Port) near the mouth. The researchers found that there was a significant seasonal difference in tintinnid biomass and diversity at both sites, with peaks in biomass in the beginning of spring, biomass at its lowest during winter, and the highest diversity found in the summer. Interestingly, the researchers measured lower species richness of tintinnids than a previous study (recorded 1986-1987) on the same estuary did; the researchers hypothesized that this could be due to a combination of species reclassification and anthropogenic impacts on the estuary. Because the study was performed on a temperate estuary, perhaps similar results could be found from studies of tintinnid biomass and diversity at other temperate estuaries (Barria de Cao et al., 2005.) 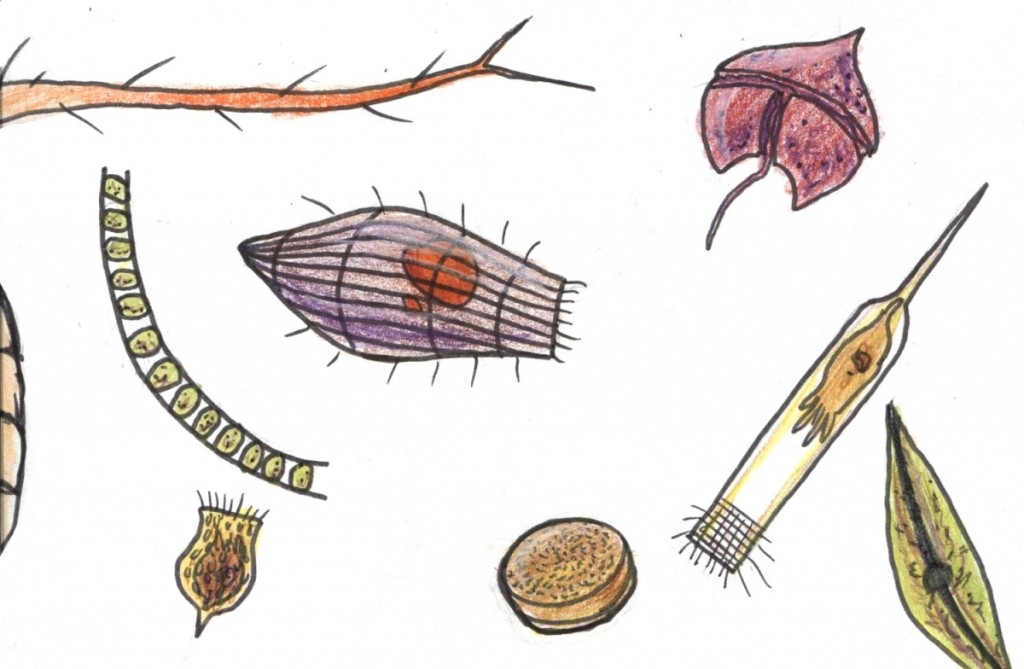 Tiarina amongst planktonic organisms found in its environment, including two other types of tintinnid.

Another study on marine tintinnids, focused on trying to explain the high diversity of tintinnid species within the fairly homogenous environment of the plankton. Lorica oral diameter (LOD) of different tintinnid species was measured by the researchers, and samples were taken from different types of marine systems that were geographically separate (gyres on either end of the Mediterranean, and the California Current.) Species distribution and LOD were compared from these samples, as well as species evenness. The researchers found that the species of tintinnid that were most numerous shared similar LODs to other numerous tintinnids in the same environment, and that species of a LOD size class that dominated in one region’s population could end up as minor members of a population from a different environment. These findings would indicate that LOD is shaped by environment, with some environments more supportive of certain LODs than others. As a tintinnid’s LOD determines the size of food that it can ingest, these findings could be used to infer what size of food is most readily available to tintinnids in different environments, with the most readily-available size corresponding to the LOD of the most numerous tintinnid species (Dolan et. al., 2013.) 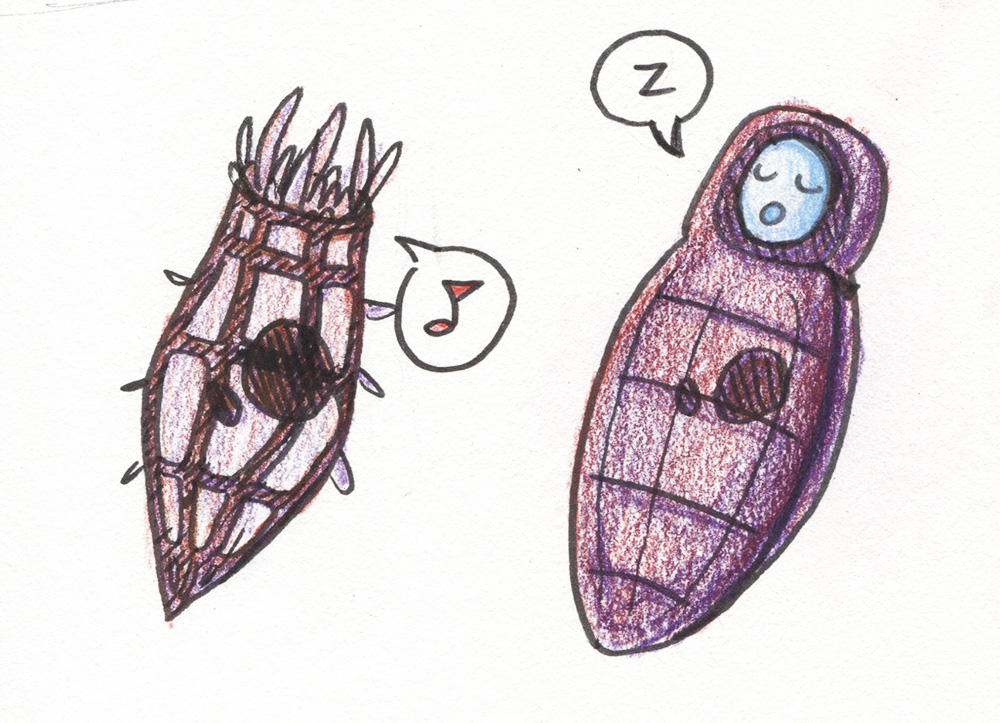 A comparison between Tiarina, a single-celled organism inside a safe lorica, and a human safely and soundly sleeping in a mummybag.

The tintinnid pictured was an unidentified marine specimen taken from Budd Inlet, on Puget Sound, an estuary in the Northeast Pacific. The specimen appeared to be of the genus Tiarina, but not enough literature was available on Tiarina for an in-depth report. Under the microscope it cruised swiftly through the plankton in a looping corkscrew pattern. Its lorica was dense enough that all that could be perceived of its internal cell structure was its twin nuclei, which showed up as bright orange. The almost carefree movements of Tiarina under the microscope belies its importance in marine food webs as a primary consumer, transferring energy that it has obtained from consuming phytoplankton to higher trophic levels when it is in turn consumed. This cycle of trophic energy transfer may even continue to the fish that you eat– some small part of the energy gained from that meal came from Tiarina‘s initial phytoplankton meal. A message that humans could glean from this is that regardless of whether one’s existance seems small and carefree, that existance still can have longstanding importance due to the interconnectedness of life.

Another way that Tiarina, and other tintinnid cilliates could relate to modern humans is in their forms. A vase, or a champagne glass is perhaps the most obvious comparison to make, but their shape and place as a food source for other microbial species could also bring to mind a cornucopia. Alternatively, the fact that Tiarina and its tintinnid kin exist as a single soft cell tucked into a protective lorica could serve as a parallel for a sleeping human tucked safely into a sleeping bag.