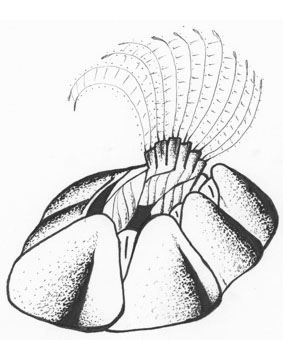 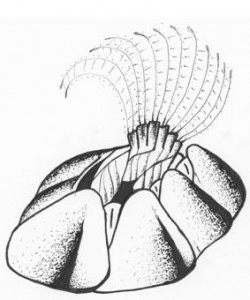 Acorn barnacles can reach up to 15 mm. in diameter

The acorn barnacle is a common and widespread intertidal organism that can be up to 15 millimeters in diameter (White, 2008). The barnacle starts out as a nauplius, a free-swimming larva hatched from a fertilized egg. It goes through five different stages of growth over 6 months. It eventually evolves into the cyprid larvalstage. The cyprid’s goal is to find a place to find a suitable place to spend the rest of it’s life, since the adult barnacle is sessile. The time it takes to find this place varies, but once it is found, the cyprid glues it’s head to it’s new home. The barnacle, now a juvenile, starts the process of forming six hard plates around it’s body (Fish, 1996). Once this process is complete and the barnacle reaches sexual maturity, the barnacle is finally an adult. This usually takes 1-2 years. The acorn barnacle uses it’s cirri (feet) to capture it’s food through a small opening in the top of it’s outer shell. The barnacle has valves it can use to seal off this small hole, which serves as protection from predators(White, 2008). During winter, barnacles do not feed and rely solely on reserves (White, 2008).

Acorn barnacles are common and exist all over the world. This species is most commonly found in

the upper mid intertidal zone (Fish, 1996). Since they use their cirri to absorb oxygen, acorn barnacles

can extract oxygen from both water and air, making them extremely adaptable. You can often identify

acorn barnacles habitat by the grayish-white “barnacle zone” found on coasts. It is less likely for there

to be a barnacle zone when there is an abundance of seaweed, because it removes the juvenile

barnacles from their place of settlement (Fish, 2008). Acorn barnacles are found on

rocky shores spanning from the Pacific Northwest all the way to north-west Spain, and many places in

between. The acorn barnacle is a hermaphrodite, meaning it possesses both male and female

reproductive organs (White, 2008). There is only one breeding season and it occurs in fall. Acorn

testing other shells until they find a functional female. They have the biggest penis to body ratio out of

the entire animal kingdom. Fertilized eggs are stored within the barnacle until they become nauplii.

Acorn barnacles are adaptable, but they are still susceptible to environmental dangers. A study

CO2 levels on the survival of semibalanus balanoides. They found that the “Embryonic development

rates seen in populations found in similar locations. There was an estimated 19 d delay in development

under high-CO2 conditions, which resulted in a 60% reduction in the number of nauplii reaching

hatching stage at the time when over 50% of the control nauplii had hatched. We conclude that ocean

stressed by temperature, which could in turn impact naupliar development and recruitment. S.

balanoides, the adults of which live in a highly variable environment, has been shown to be

range) over a crucial period in their life cycle. Under experimental high-CO2 conditions, some adults

were able to survive and larvae were able to hatch. This may indicate that there is still potential for

organisms to find suitable habitats and for populations to develop and survive.”(Findlay, Kendall, et al.,

2009). Basically, the embryonic development of Semibalanus balanoides is being compromised by

rising CO2 levels, but some of the test subjects survived under stressed conditions, so there is hope for

the survival of their species. This is important because although there have been studies on other

crustacean larva, before this there was no information concerning the affects of CO2 on Semibalanus

Balanoides. There is now evidence backing up the negative consequences of high CO2 on these

animals. In another article by the same organization one year later, they tested what ocean acidification

can do to the population dynamics of Semibalanus balanoides at it’s Southern range end. “Using

empirical data, we forced a barnacle (Semibalanus balanoides) population model to investigate the

southern limit of its geographic distribution. Hindcast models were compared to observational data

unit/yr), indicative of ocean acidification over the past 50 years, does not cause an observable impact

on the population abundance relative to changes caused by fluctuations in temperature. Below the

this southern range edge. However, above this value, SST has the overriding influence. At lower SST, a

decrease in pH (according to the National Bureau of Standards, pHNBS) from 8.2 to 7.8 can significantly

decrease the population abundance. The lethal impacts of ocean acidification observed in experiments

on early life stages reduce cumulative survival by ~25%, which again will significantly alter the

population level at this southern limit. Furthermore, forecast predictions from this model suggest that

occur if there was only global warming and no concomitant decrease in pH.”(Findlay, Burrows, et al.,

2010). This indicates that it in fact does have an affect on the population dynamics and would cause

the species to die out prematurely. 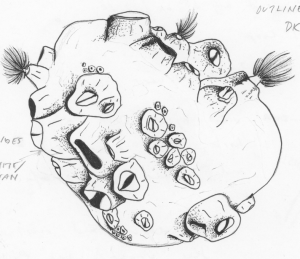 ACORN BARNACLES AND THE 21ST CENTURY:

The thing that interested me the most about acorn barnacles is their reproductive system. They have

evolved to be hermaphroditic, having both female and male genitalia. They evolved this way for survival

because they are sessile creatures. This got me thinking about the evolution of sexuality and gender in

humans in the 21st century. Acorn barnacles evolved this way out of necessity, does that mean this

generation of gender and sexual fluidity could be out of necessity too? What if the reason that gender

and sexuality are becoming more open-ended is not only because of cerebral growth, but also out of a

An acorn barnacle feeding on a copepod with it’s cirri

(2010). Can ocean acidification affect population dynamics of the barnacle Semibalanus balanoides at