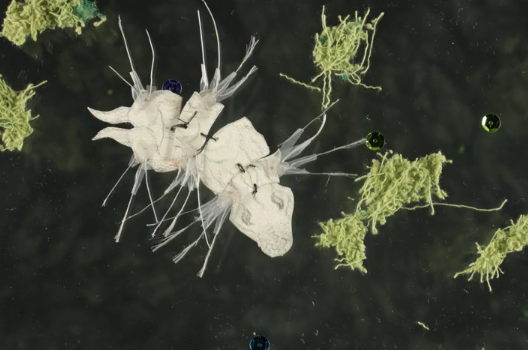 I am using this species of polychaete to describe my organism because at the larval stage it is difficult to determine the end resulting organism. This organism is one of the more widely studied polychaetes and has more relevant data. Hediste diversicolor: commonly known as a ragworm, is a polychaete worm in the family Nereidae. It lives in a burrow in the sand or mud of beaches and estuaries in intertidal zones in the north east Atlantic.

Hediste diversicolor can grow up to 10 cm (4 in) in length and may have from ninety to one hundred and twenty segments when mature. The head has a pair of palps, two pairs of antennae, four pairs of tentacles and four eyes. Each body segment has a pair of bristly appendages known as perapods which are used for walking and swimming. There is a prominent blood vessel running along the dorsal surface of the animal. This ragworm is pale brown but changes to green as the gonads mature and the breeding season approaches.

Hediste diversicolor is a predator and generalist scavenger, able to adapt its diet to whatever is currently available. It spins a mucus net at the entrance of its burrow in which it traps phytoplankton, zooplankton, diatoms, bacteria and other small particles. It creates a water current through its tube by writhing about inside to draw particles through the net. Periodically it rolls the net up and swallows it before spinning another. When the availability of suitably-sized food particles is low it emerges from its burrow and hunts for small invertebrates, seizing them with its strong jaws. It also eats detritus and even animal faeces.

The sexes are separate in Hediste diversicolor, and the number of females heavily outweigh the number of males. As the breeding season approaches, the males, which were previously indistinguishable from the females, turn bright green. At the same time, the females turn a duller dark green on the dorsal surface with their earlier orange-brown pigmentation still showing through. Eggs develop within the female’s body cavity. Histolysis then occurs and the body wall becomes brittle and eventually bursts, liberating the eggs into the burrow.

Synchronized spawning takes place in early spring, usually at the time of the new or full moon when the water has warmed up after the winter and attained a temperature above 6 °C (43 °F). The timing of this event varies throughout the worm’s range and more southern populations mature at a year of age while more northerly ones may be three years old before they breed. The male seems to be attracted to a burrow occupied by a female by the release of a pheromone into the water. He crawls across the seabed and liberates sperm into the water just outside the entrance of the female’s burrow. The sperm is drawn into the tube by the water current that the female creates by undulating her body. Here fertilisation takes place and the larvae are brooded for ten to fourteen days. Both males and females die after spawning.

Hediste diversicolor is widespread and common and is eaten by many species of birds and fish. It is the main food item for the pied avocet (Recurvirostra avosetta), the grey plover (Pluvialis squatarola), the curlew sandpiper (Calidris ferruginea), the Bar-tailed godwit (Limosa lapponica) and the curlew (Numenius arquata). The species shown in the animation is the Flame Hawkfish (Neocirrhites armatus) in it’s developing stage. The hawkfish swims in the general zone of some forms Polychaete worm larvae and hunts them when they are in the area.

Hediste diversicolor is used as a model laboratory animal for research. It has also been used to evaluate the quality of marine sediment because it bioaccumulates certain heavy metals such as lead, cadmium,chromium and arsenic. Anglers use it for bait when sea fishing, digging it out of the substrate with a large fork. It is also available commercially.

Rotifera bdelloidea are found in freshwater habitats all over the world. The main characteristics that distinguish bdelloids from related groups of rotifers are exclusively parthenogenetic reproduction and the ability to survive in dry, harsh environments by entering a state of desiccation-induced dormancy (anhydrobiosis) at any life stage. They are often referred to as “ancient asexuals” due to their unique asexual history that spans back to over 25 million years ago through fossil evidence. Bdelloid rotifers are microscopic organisms, typically between 150 and 700 µm in length. Most are slightly too small to be seen with the naked eye, but appear as tiny white dots The bdelloid digestive and reproductive systems can be found within the trunk sections of their bodies, with the stomach being the most visible of the organs.

Most use rings of cilia in the corona organ to create currents of water which blow food through the mouth to the mastrax organ which has been adapted specifically for grinding food. Food includes suspended bacteria, algae, detritus, and other things.

They have three main methods of movement: free swimming, inch-worming along a substrate, or sessility. Inch-worming (or crawling) involves taking alternate steps with the head and tail

A male has never been observed. Females reproduce exclusively by parthenogenesis, a form of asexual reproduction where embryos grow and develop without the need for fertilization. 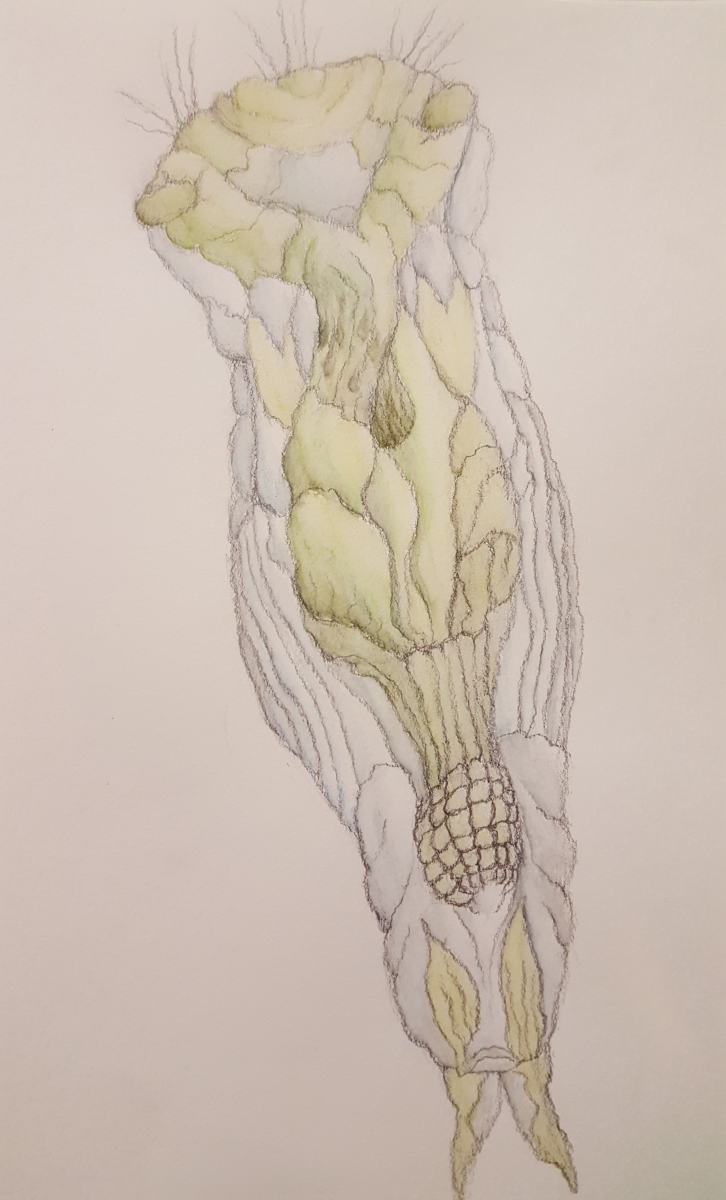 Bdelloids are able to survive environmental stresses by entering a state of dormancy known as anhydrobiosis which enables the organism to rapidly dehydrate and thus resist desiccation. While preparing for this dormant state many metabolic processes are adjusted to equate for the change in state; e.g. the production of protective chemicals. The bdelloid can remain in this state, until the return of a sufficient amount of water, at which point they will rehydrate and become active within hours. Hatching of the young will only occur when conditions are at their most favourable.

Obligate asexuals will be driven extinct by rapidly changing parasites and pathogens, because they cannot change their genotypes quickly enough to keep up in this never-ending race. In populations of bdelloid rotifers, however, many parasites are destroyed during periods of extended desiccation.

Perisesarma bidens, the red-clawed crab, is a species of crab found in the Indo-Pacific region from Zanzibar to Japan and Fiji. The gif animation shown is a depiction of their Zoae larvae stage of metamorphosis. Red crabs are apart of the class Malacostraca. They are abundant in all marine environments and have colonised freshwater and terrestrial habitats. They are segmented animals, united by a common body plan comprising 20 body segments (rarely 21), and divided into a head, thorax, and abdomen.

For malacostracans their digestive tract is straight and the foregut consists of a short oesophagus and a two-chambered stomach, the first part of which contains a gizzard-like “gastric mill” for grinding food.

Like other crustaceans, malacostracans have an open circulatory system in which the heart pumps blood into the hemocoel (body cavity) where it supplies the needs of the organs for oxygen and nutrients before diffusing back to the heart.

Malacostracan sensory organs include compound eyes (often stalked), ocelli (simple eyes), statocysts and sensory bristles. The naupliar eye is a characteristic of the nauplius larva and consists of four cup-shaped ocelli facing in different directions and able to distinguish between light and darkness.

Red claw crabs can survive in freshwater, however in order to thrive these crabs require brackish water. These are tropical crabs, and prefer the water temperature between 75-80 °F

Red Claw Crabs are omnivores that readily accept a variety of foods, including shrimp pellets, fish flakes, brine shrimp, bloodworms, blanched vegetables, and nearly anything else they can get their claws on due to their opportunistic behavior.

Male Red Claw Crabs tend to have larger, redder claws and are more brightly colored, whereas the females have smaller, darker claws. Males have a narrower flap on the underside, females have a wider flap. Most species of malacostracans have distinct sexes (a phenomenon known as gonochorism), although a few species exhibit hermaphroditism.

Copepods are a group of small crustaceans found in the sea and nearly every freshwater habitat. Neopcalanus tonsus are a subspecies of copepods that live in the Subantartic, Antartic(but not coastal Antartic), Indian, Pacific, and the Atlantic.  As with other crustaceans, copepods have a larval form. For copepods, the eggs hatches into a naplius form, with a head and a tail but no true thorax or abdomen. The larva molts several times until it resembles the adult and then, after more molts, achieves adult development. The naplius form is so different from the adult form that it was once thought to be a separate species.

Copepods vary considerably, but can typically be 1 to 2 mm (0.04 to 0.08 in) long, with a teardrop-shaped body and largeantennae. Neocalanus tonsus size can range from 3.3mm to 4.4mm with males having a small size difference between the females that makes them larger. Like other crustaceans, they have an armoured exoskeleton, they are so small that in most species, this thin armour, and the entire body, is almost totally transparent.

Because of their small size, copepods have no need of any heart or circulatory system, and most also lack gills. Instead, they absorb oxygen directly into their bodies. Their excretory system consists of maxillary glands.

The second pair of cephalic appendages in free-living copepods is usually the main time-averaged source of propulsion, beating like oars to pull the animal through the water. Some copepods have extremely fast escape responses when a predator is sensed and can jump with high speed over a few millimetres. Many species have neurons surrounded by myelin (for increased conduction speed), which is very rare among invertebrates. 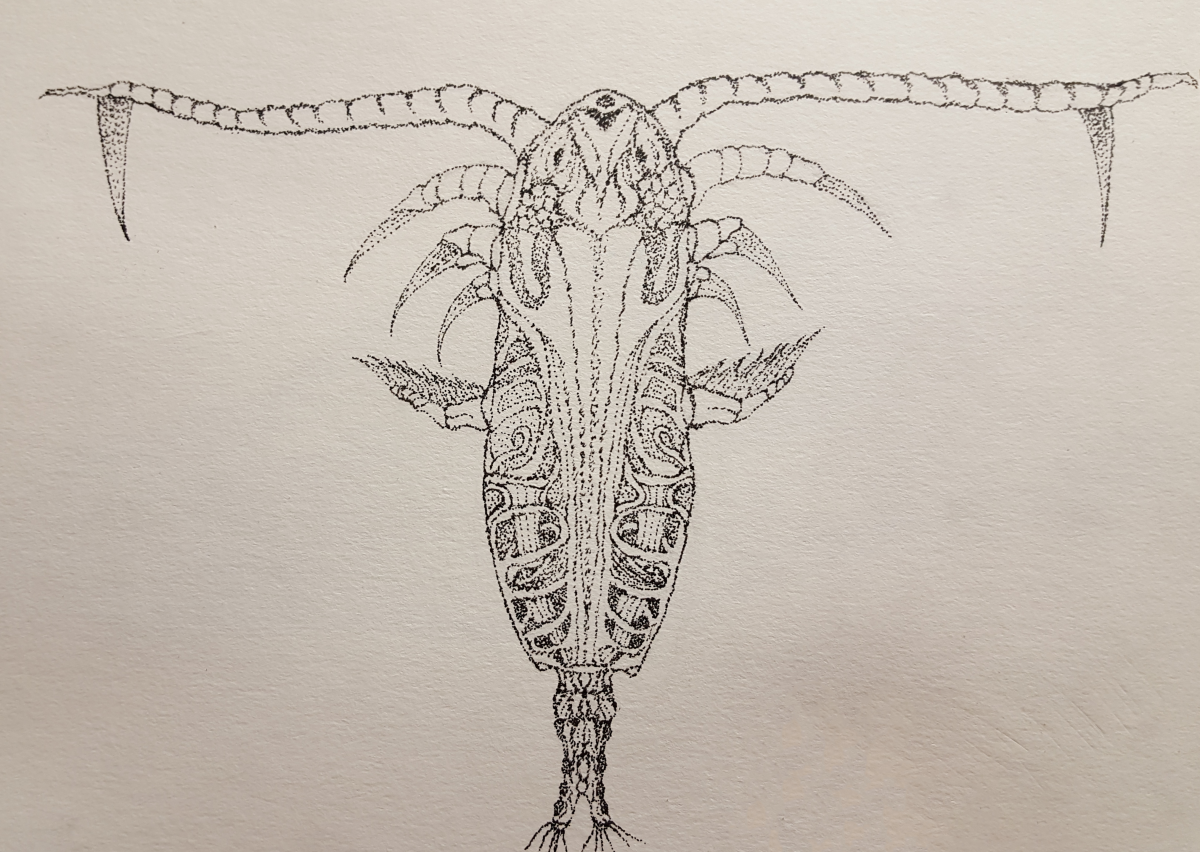 Some copepods emit pheromones, which leave a trail in the water that the male can follow. Copepods are a holoplankton species, meaning they stay planktonic for all of their lifecycle. During mating, the male copepod grips the female with his first pair of antennae, which is sometimes modified for this purpose. The male then produces an adhesivepackage of sperm and transfers it to the female’s genital opening with his thoracic limbs. Eggs are sometimes laid directly into the water, but many species enclose them within a sac attached to the female’s body until they hatch. Neocalanus tonsus have two egg production strategies: Mesopelagic-dwelling females use stored lipids for egg production in winter, and epipelagic dwelling females rely on ambient food supply for egg production in spring.

Planktonic copepods are important to global ecology and the carbon cycle. They are usually the dominant members of the zooplankton, and are major food organisms for small fish such as the dragonet, banded killifish, whales, seabirds, alaska polluk and other crustaceans such as krill in the ocean and in fresh water. Some scientists say they form the largest animal biomass on earth. Copepods almost certainly contribute far more to the secondary productivity of the world’s oceans, and to the global ocean carbon sink than krill, and perhaps more than all other groups of organisms together.