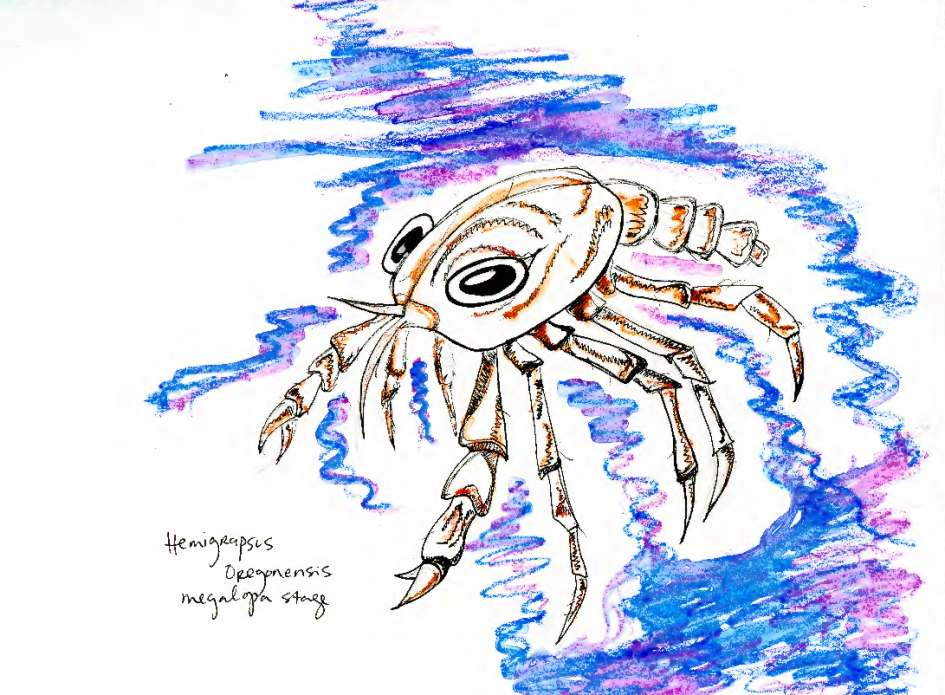 The life cycle of a Bay Shore Crab. By: Emma McConahay.

Bay Shore Crabs live in a range from Resurrection Bay, Alaska to Baja California (Harbo, 1999), but are most common in Oregon and Washington. They grow up to 5cm across their shell. One of their most distinctive characteristics is the seta on their yellow-green legs (Lamb, 2005). This species is found in intertidal zones of estuaries, in mud flats, salt marshes, beds of algae, rocky shores and (Oliver and Schmelter). They primarily consume diatoms, algae and occasionally meat when available (Oliver and Schmelter, 2016). 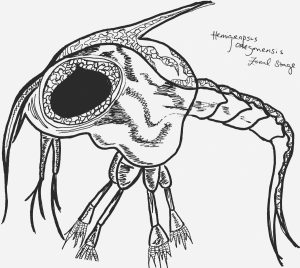 Females typically produce broods of 800 to 11,000 embryos between February and April, which hatch between May and July. 70% of females produce and additional brood that hatches in September (Hiebert, 2015). Hatching typically occurs after 44 days at 300-400µm in diameter. After hatching, the larvae develop through five planktonic zoea stages, in which they have large compound eyes and four spines, one rostal, one dorsal, and two lateral (Hiebert, 2015). Post-zoeal is the molt into the megalopa stage, very rectangular with a carapace and uropod setae (Hiebert, 2015). As adults, they have brownish, yellow-green or grey carapaces with setae on all legs (Oliver and Schmelter, 2016). The have two lateral carapace teeth, and it’s eyestalks are at a antero-lateral angle (Hiebert, 2015). The most visible difference between male and female adults is that the female carapace is much more wide than the male carapace, and contrasting with the male carapace, the female sternum is not visible (Hiebert, 2015).

These shore crabs feed at night to avoid their primary predators, birds. Bay Shore Crabs are very fast, can dig quickly, and easily find shelter from predators beneath rocks (Hiebert, 2015). In the day they stay out of sight under debris (Evergreen Archives, 2016).

This animation displays the hatching of the planktonic zoea and its development through the megalopa and adult stages.

A 1995-1996 scientific study in Anacortes, WA examined Hemigrapsus oregonensis zoeal morphology and found that crab larvae do not require constant prey or access to light during prey capture in larval development (Sulkin et al., 1998). The larvae were observed feeding on controlled densities of Artemia nauplii over several increments of time (1, 4, 8, and 24 hour periods) and the research team found that the survival and stage duration were similarly exhibited for those fed for 4 hours followed by 20 hours of reduced access to prey as those with continuous access to prey (Sulkin et al., 1998). This information is important in understanding Hemigrapsus oregonensis as adaptive creatures because although the nauplii encounter high densities of planktonic prey near the surface, as the larvae undertake regular vertical migrations they often experience long periods of time with little prey and light (Sulkin et al., 1998). Because Hemigrapsus oregonensis larvae can withstand long periods of time without access to prey, it makes them more resilient in their estuarine and marine environments. Many additional resiliencies develop as these crabs molt from planktonic organisms to benthic critters, such as the ability to withstand hypoxic conditions and temperature fluctuation more so than many other species of crab.

Now in the 21st century the habitat norms are changing for the Bay Shore Crabs more rapidly than perhaps any other period of time. New threats are now being imposed on this estuarine species due to anthropogenic forces. Humans have disrupted normal conditions and cluttered the crabs’ landscapes with plastic.  Ocean acidification is a growing concern to the crabs, and the low oxygen “dead zones” in coastal waters are the likely cause of many mass deaths of the crabs (Pickett, 2015). Oysters, clams and crabs are among the most vulnerable U.S. species to the consequences of ocean acidification (Pickett, 2015). It disturbs shell growth and development and the low oxygen levels result in deathly hypoxia (Pickett, 2015). Although crabs are generally fairly tolerant to temperature change, heightened temperatures have also been observed as potential threats. (Hiebert, 2015). 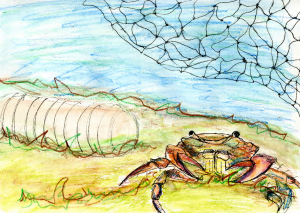 Hemigrapsus oregonensis in its natural environment~ an estuarine landscape sprinkled with human touch.