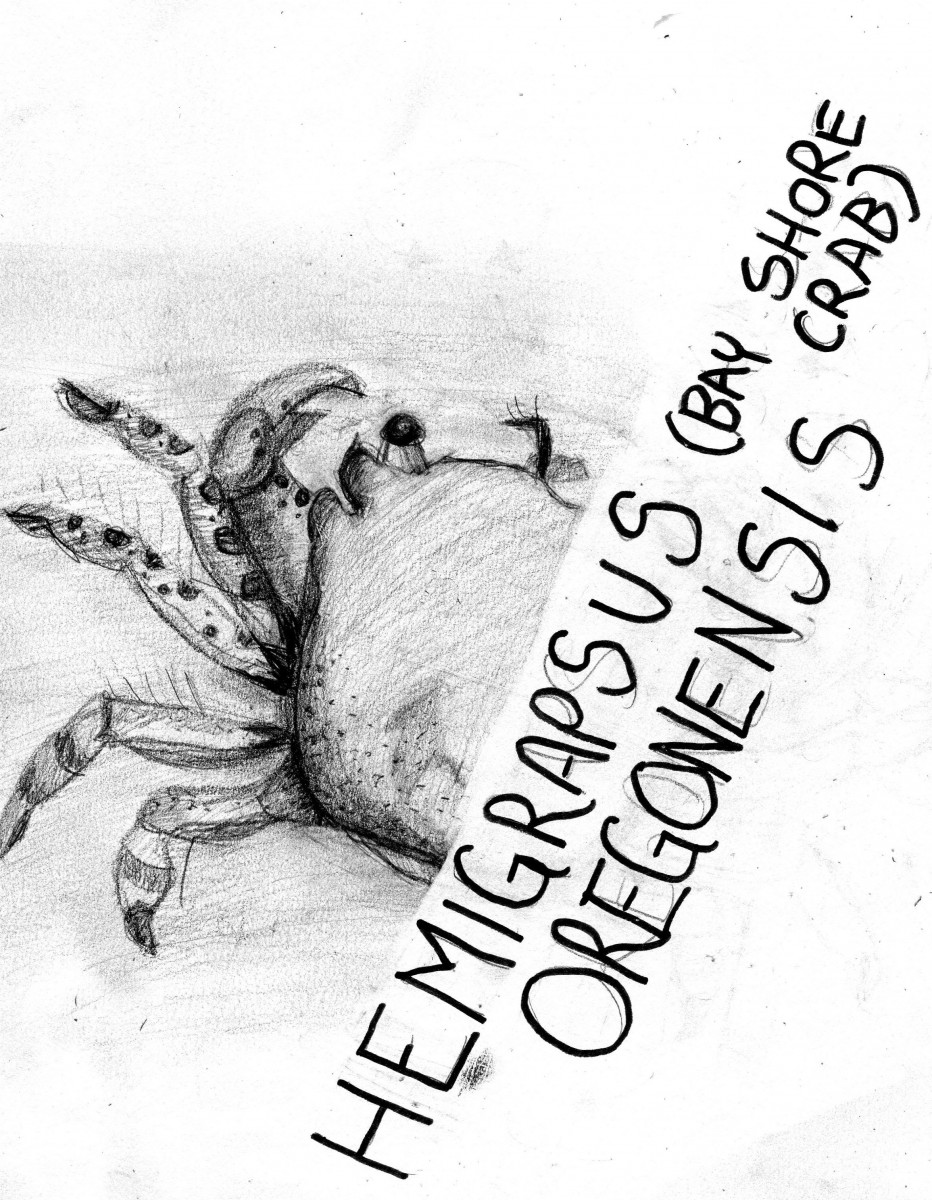 Hemigrapsus oregonensis is an arthropod, the most diverse phylum of all animals. This phylum also consists of insects, arachnids, and other crustaceans. Arthropods are characterized by exoskeletons and jointed legs. H. oregonensis is a bilaterally symmetrical animal composed of segments. Hemigrapsus, similar to most other brachyurans in its subgroup share certain external characteristics, sometimes referred to as the “caridoid facies.” These caridoid facies consist of a rectangular carapace or upper shell that covers the head and thorax, wide-set eyes perched on stalks, and two sets of sensory appendages, or antennae; one of which appears to have two branches; the second consisting of one long branch and a second smaller branch at the base. Interestingly, there is no rostrum present on H. oregonensis, unlike many other species within the larger class Malacostraca. Brachyurans also have eight thoracic segments, the first three of which are fused into the head, with attached appendages to handle food called maxillipeds. The maxillipeds are then followed by large pinching appendages, followed again by 4 pairs of appendages designed for walking. The abdomen is curved under the thorax, and fits in the underside of the crab. (Shimek, 2008.)

This video portrays the reproduction and early life stages of H. Oregonensis.

From an internal perspective, most “true crabs” share a similar structure. The mouth opening is located on the ventral side of the organism. Anterior to the mouth opening are the mouthparts, functioning as manipulative tools for food handling, as well as one additional appendage that pumps water over the gills. Of the appendages making up the mouthpart, there are large mashing jaws that pre-masticate their food, but most of the chewing action is performed in the stomach after ripping food to small pieces using large claws, then ripped into even smaller pieces by the maxillipeds covering the mouth. Food is then moved through the esophagus and into the stomach. The stomach is comprised of a large anterior stomach containing a “grinding mill” of teeth and stiff bristles, and a posterior stomach responsible for digestion. In this area food is surrounded by a chitin membrane that protects the gut walls from digestive enzymes. The food is then moved into the digestive glands where nutrients are absorbed, and eventually to the hindgut where small pelleted feces are released from the anus. (Shimek, 2008.)

Shore crabs can be colored in a variety of ways, “often with light greenish spots on a dark reddish-brown background, but may be a pale green, yellow-green, gray-green, or even nearly white.” (Cowles, 2005.) Shore crabs are intertidal organisms that can be found as far north as Resurrection Bay, Alaska, and as far south as Bahia de Todos Santos, Baja California, inhabiting bays, estuaries, open beaches with fine sediment, open mud flats, algal mats, and eelgrass beds. They can withstand a water depth of up to five meters. (Kozloff, 1993.)

During the day, Hemigrapsus oregonensis remain hidden in excavated burrows, as they can survive in more hypoxic conditions than a common predator and close relative, the coinciding “Purple Shore Crab”, Hemigrapsus nudus. H. nudus can be distinguished from H. oregonensis by the presence of purple spots on the pincers of the first pair of legs, or “chelipeds.” Another species of crab, Pachygrapsus crassipes, also utilize these burrows in addition to preying upon H. oregonensis. In a study published by S.W. Willason at the Marine Science Institute at the University of California at Santa Barbara, both of the coexisting species were studied in a tidal marsh near Santa Barbara, CA. Initial observations are as follows: “Both species are found in intertidal mud burrows along banks of the slough channels. H. oregonensis occupies the entire intertidal vertical range on the mud banks, whereas P. crassipes inhabits primarily the uppermost zone (above +1.4 m). In areas where both species occur in large numbers, the density of H. oregonensis in the uppermost zone is less than in areas with only a few P. crassipes. P. crassipes does not excavate burrows, but moves into and enlarges the existing burrows of H. oregonensis. P. crassipes also preys upon H. oregonensis, but burrowing provides the latter with partial refuge from predation.” (Willason, 1981)

Additionally, they found an interesting dynamic between populations that provides insight into the ecological significance of H. oregonensis; “Population structures of the two species differ in the number of small crabs that occur in different areas of the slough. Few small specimens of P. crassipes are found along the upstream muddy banks of the slough, whereas young specimens of H. oregonensis are abundant in these areas. Physical factors such as salinity and siltation may restrict settlement or reduce survivorship of small P. crassipes. A balance between the predatory/competitive abilities of P. crassipes and the greater tolerance of H. oregonensis to physical stresses is proposed as a mechanism of coexistence.” (Willason, 1981) Additional common predators of H. Oregonensis are shorebirds, and the invasive crab species Carcinus maenas.

Hemigrapsus Oregonensis has another interesting symbiotic relationship with the entoniscid isopod Portunion conformis, a parasite that can be found in the perivisceral cavity of the crab. A study on a species within the same genus performed by A.M. Brockerhoff at the School of Biological Sciences at the University of Canterbury explored the presence of P. conformis and the effect the species may have on reproduction. Initially, a varying percentage of infected crabs was observed; “Portunion sp. was found in Cyclograpsus lavauxi (34.1%, n = 1,650), Hemigrapsus crenulatus (19.0%, n = 2,300), and Helice crassa (11.6%, n = 825) but was absent from Hemigrapsus sexdentatus (n = 636).” Secondly, the parasites themselves were characterized: “Parasitized hosts contained mostly 1 female Portunion sp. but occasionally up to 7 females were found. One to 3 dwarf males typically occurred on each mature female Portunion sp. Most developmental stages of female Portunion sp. were found throughout the year, demonstrating that reproduction and infection occurred continuously.” Finally, the effects of the parasite on crab reproduction is addressed; “Portunion sp. differentially affected male and female hosts. Prevalence was generally higher in male hosts than in female hosts and increased significantly with host size. Female hosts were castrated, whereas males were not. Portunion sp., therefore, influenced the operational sex ratio in its host species, causing a more male-biased ratio.” (Brockerhoff, 2004.) These findings provide evidence that allow us to infer that this parasite has an important role in limiting the population.

By night, Hemigrapsus oregonensis feeds mostly on diatoms and green algae (particularly “Sea lettuce,” or Ulva lactuca), though they have been known to consume meat if given the opportunity. 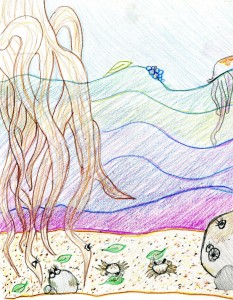 There are multiple ecological roles of Hemigrapsus Oregonensis, however in particular, mangrove ecosystems are especially dependent on grapsid crabs as a whole (and vice versa). In a study in China, Y.L. Lee examines this relationship; “Through the feeding activities of the crabs, large proportions of organic matter production, i.e. mangrove leaves, are recycled within the forest. This initial retention of production in the forest refines earlier estimates of tidal export from the mangroves. Crab-processed organic matter could also form the basis of a coprophagous food chain involving small invertebrates, or be re-exported as micro-particulates. Differential consumption by crabs of mangrove propagules also affects mangrove community structure by diminishing the relative abundance of species whose propagules are preferred foods. Bioturbation by the crabs also results in changes in surface topography, particle size distribution and degree of aeration and, thus, the concentration of phytotoxins in the substratum. Such changes could affect growth and production of the mangroves. Growth and reproduction of the crabs may in turn be influenced by the associated mangrove species, mainly through the provision of food. The semi-terrestrial and air-breathing habit of the grapsid crabs probably makes them tolerant of deoxygenation caused by organic enrichment, but development of the landward mangroves will strongly affect survival of the crabs.” (Lee, 1998.)

Mangrove swamps are extremely productive ecosystems that are intimately connected to people. Mangroves are essential to fisheries; providing a home to a large variety of fish, crustaceans, and mollusks as well as a nursery for many more. It has been found that “there are as many as 25 times more fish of some species on reefs close to mangrove areas than in areas where mangroves have been cut down,” making a large impact on fish availability for human consumption. Mangrove forests also provide timber, plant products, coastal protection from erosion and other factors, and are common tourist destinations; “..these goods and services are conservatively estimated to be worth US$186 million each year.” (Rath, 2016.)

Brockerhoff, A. M. “Occurrence Of The Internal Parasite Portunion Sp. (Isopoda: Entoniscidae) And Its Effect On Reproduction In Intertidal Crabs (Decapoda: Grapsidae) From New Zealand.” Journal of Parasitology 90.6 (2004): 1338-344. Web. 25 May 2016.