They are shaped like shrimp in their final form. They go through different stages in their life cycle. In the beginning stage they look nothing like the adults. It is not until they reach the copepodite stage that they form their adult form. They have short cylindrical bodies and can be divided into segments. Their head are normally rounded and will usually have protruding antenna. The antennae help slow their sinking rate. Copepods can be found in oceans, seas, estuaries, rivers and lakes. 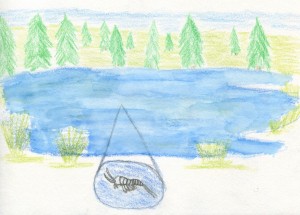 They are important in the food web. They are primary consumers and can provide food for other predator fish. There are about 3600 described species of harpacticoid copepods in the world and about 10% are fresh water. Approximately 75 species are found to be in continental North America. (Hudson, 2003)

After the nauplius stage, the copepod enters the copepodite stage. During stage one it grows into an adult body and segmentation occurs. Appendages are added while others develop. When it reaches the final stage it the body should have 9 segments and 5 pairs of legs. They go through 6 naupliar stages and 5 copepodite stages by the time they reach adulthood. (Hudson, 2003)

(note: animation of the life cycle of a copepod)

Harpacticoids can be found in both pelagic and benthic areas of marine and estuarine environments. Copepods in pelagic areas are abundant in form of zooplankton. They provide a link between primary production of phytoplankton and for predators like shrimp, fish juveniles and whales. Their carcass and fecal pellets also provide use as for nutrients in the food web and nutrient cycle. 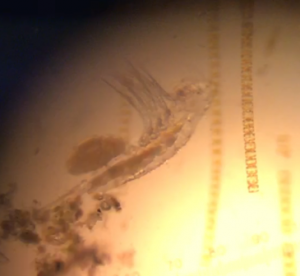 Another important role copepods play is in the global carbon budget. Partcipating in the vertically migration of carbon from the surface to the deep sea. It was found that certain pathogenic bacteria would attach itself to the copepods. This led to the prediction that copepod distribution and activity may influence how bacteria is distributed throughout the areas.(Pg. 282, Amiard-Triquet, 2015)

The benthic harpacticoid was one the species used in toxicity tests. It was one of the first to be used in a reproduction toxicity tests. (Pg. 287, Amiard-Triquet, 2015) They were considered a useful candidate in the role in aquatic ecotoxicology. Evaluation of the their full life cycle effect and population-level toxicity chemicals was also useful. (pg 282, Amiard-Triquet, 2015)

Harpacticoid are important to the marine environment. They are apart of the food chain, but also provide food for other organisms. Without them they would affect other organisms in the food web. They also provide use in research for toxicity testing. They influence how carbon and bacteria are distributed in the ocean and other marine environments. 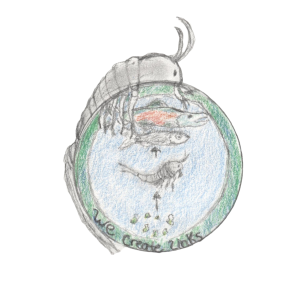 In the 21st Century they are the links in the food web providing nutrients and food for other marine organisms. While also feeding on food like bacteria and detritus. They provide trophic levels balance. It important to note their existence because there are many of them. Each provide a use in the marine environment, but also to humans because they help feed marine animals that we eat.