The copepod is a microscopic organism that has a major impact on the development of marine life. The copepod belong to the zooplankton family. They are small measuring .5 to 15mm. They are a small crustacean with bodies covered in stiff bristles they have a hard exterior, two pairs of antennas and many pairs of legs. Although these organisms are unseen to the naked eye the impact they have on marine life is substantial. A person standing on the shore of a body of water could look into the water and not see the productivity going on that is essential to all marine life. The first layer of water from the surface to 250 meters deep is called the epipelagic zone. In this zone is where nearly all primary production happens. In this zone you will find many species of phytoplankton and zooplankton. Zooplankton are the major group on animals in the epipelagic zone. They provide a food source not only to other marine communities but also to land dwelling birds and mammal. Of the zooplankton in the epipelagic zone copepods make up about 70% of the community. The presence of copepods is also high in the mesopelagic zone, which is the layer just below the epipelagic. Copepods are heterotrophs, meaning they cannot produce their own food and must obtain energy from organic matter produced by autotrophs. Their food source comes from phytoplankton and other zooplankton, they also consume other copepods. The copepod is a bit unique amongst the zooplankton, instead of eating whatever is in front of them they use their sight and smell to be able to identify individual phytoplankton to consume. Although they are near the bottom of the food chain they are extremely viable to the community. The important nutrients copepods receive from eating phytoplankton is passed up the food chain, Copepods fall prey to many varieties of fish and other plankton, these animals are then eaten by bigger marine life such as seals which and then eaten by larger marine life such as wales. All of the seafood consumed by humans has at some point been nourished by zooplankton such as copepods. Without the presence of these tiny creatures marine life would diminish. The life cycle of copepods is not long they only live from about one week to six months. Their lives start when a male copepod attached a sperm sac to a female copepod. The sac is then absorbed by the female and the eggs are fertilized and attach to the abdominal region of the female. When the eggs hatch they are called Napoli. Napoli are the earliest free-living stage of crustacean life. When they are first hatched it is unclear what they will grow into as adults. Before you can tell if a Napoli is a copepod it goes through a minimum of five different stages. The copepod is an amazing microorganism and without them marine life would change as we know it. copepod 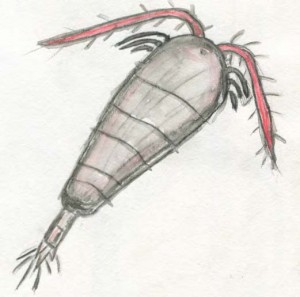