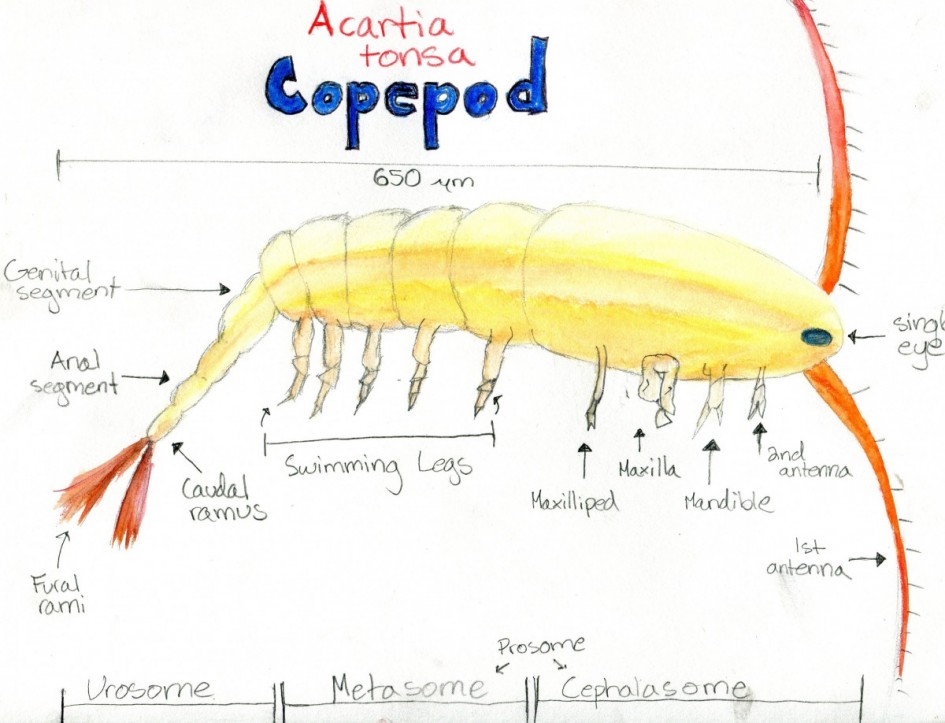 Acartia tonsa are microscopic organisms that range from 500 micrometers to 1500 micrometers in length. These belong to the sub-class of copepoda, which belongs to phylum of Arthropoda.  This species is omnivorous and feeds on other nauplii, dinoflagellates, ciliates, protozoans, phytoplankton, bacterioplankton, algae, and diatoms (Roman, etal 2006). Acartia tonsa feed in two ways. To feed on immobile organisms such as diatoms first they move their maxillae to make a current that pulls organisms in towards it. Then it filters out this water with its second maxillae, digesting the edible material that is left. Acartia tonsa can also capture mobile prey by making little movement while sensing their surroundings with their antennae, and then pouncing on their meal. The type of feeding by these organisms is based up on their type of prey. (Saiz, & Kiørboe. 1995)

A copepod moving and feeding in the microcosm. 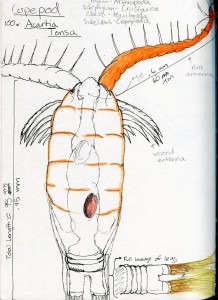 Copepod bodies are translucent, bilaterally symmetrical, and lack a protective carapace. Their bodies have three main body segments, cephalasome (head and sensory organ), metasome (housing legs and swimmerets), and urosome (where their sexual organs are located). Starting with the prosome segment copepods have one single eye in the center of their head. They have two pairs of antennaes, the first antennae being shorter and the second being the longest branching from the side of the head. Behind the second antennae copepods have a mandible and maxilla for crushing food. Past these they have a pair of maxillipeds for further chewing. In the metasome segment copepods have five pairs of swimming legs. In the urosome segment at the base of the “tail” lays their genital segment. Towards the middle of this tail there is the anal segment. Male and Female copepods can be identified based off of the shape of their antennae. Females have longer and straighter antennae while males tend to be curved at the tips. This difference is because males used their curved antennae to grasp on to females during reproduction. (Marcus, Wilcox. 2007) 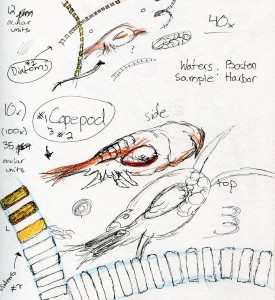 Microscopy drawing of a copepod surrounded by diatoms, dinoflagellates, algae, and cilia.

“These calenoid copepods were originally observed in the Indo-Pacific region. This species is now regarded as cosmopolitan and is found in the Atlantic, Indian and Pacific Oceans, the Sea of Azov, the Baltic, Black, Capsian, Mediterranean, and North Seas, and also the Gulf of Mexico and other marine environments, as well as estuaries. Its wide geographical range may be the result of transportation in the ballast water of ships.” (Marcus & Wilcox 2007) Acartia tonsa commonly occur mostly in the benthic layers of marine seascapes are mostly found in brackish and marine coastal waters. The population of Acartia depends on the populations of its predators. The survivability of the eggs, nauplii, and sufficient food source heavily affect the population (Mauchline, 1998). They are commonly found in depths from 0-50 meters and temperatures from 17-25oC. Free swimming and able to withstand large ranges of salinity and temperature, these copepods are very resilient and able to fill environmental niches where there isn’t already another dominant species of copepod.

Why should we care? 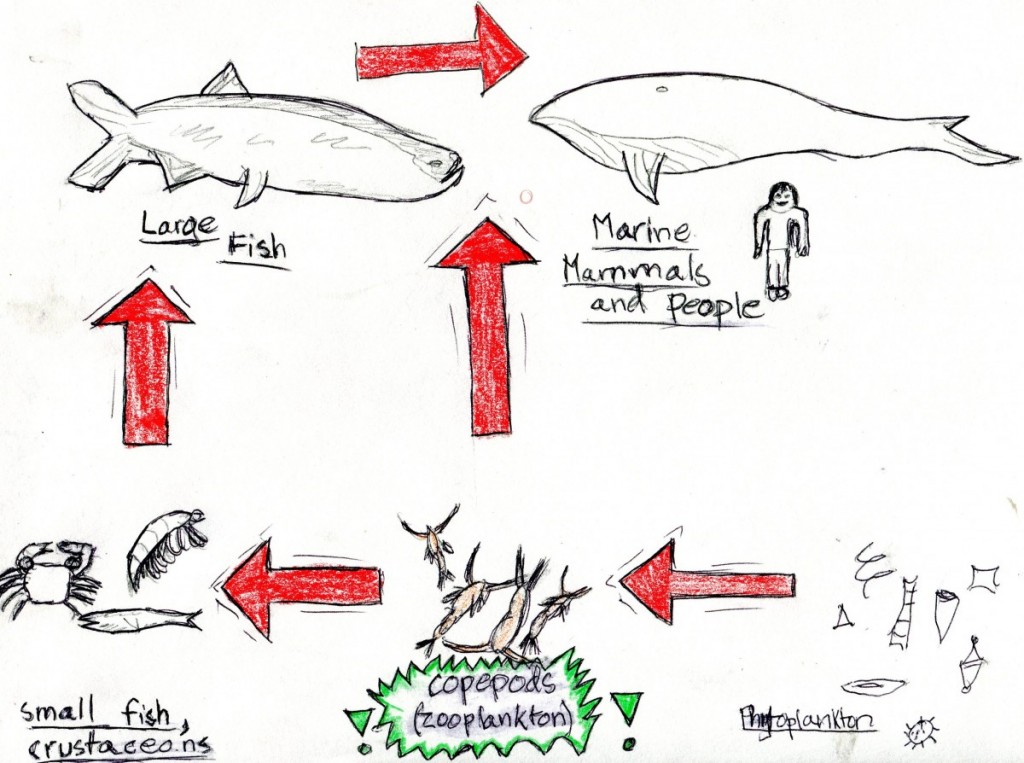 Copepods are a keystone species and are extremely important in the marine food chain. They digest phytoplankton and algae, and are an important food source for fish and larger mammals. Releasing ammonium and nitrogen into the water, this makes them essential in the cycling of nutrients throughout our oceans. Copepods create a link in the trophic food chain between the microscopic organisms and larger organisms. Acartia tonsa could be symbolized as a living bridge, enabling the survival of a plethora of species up to this very day.