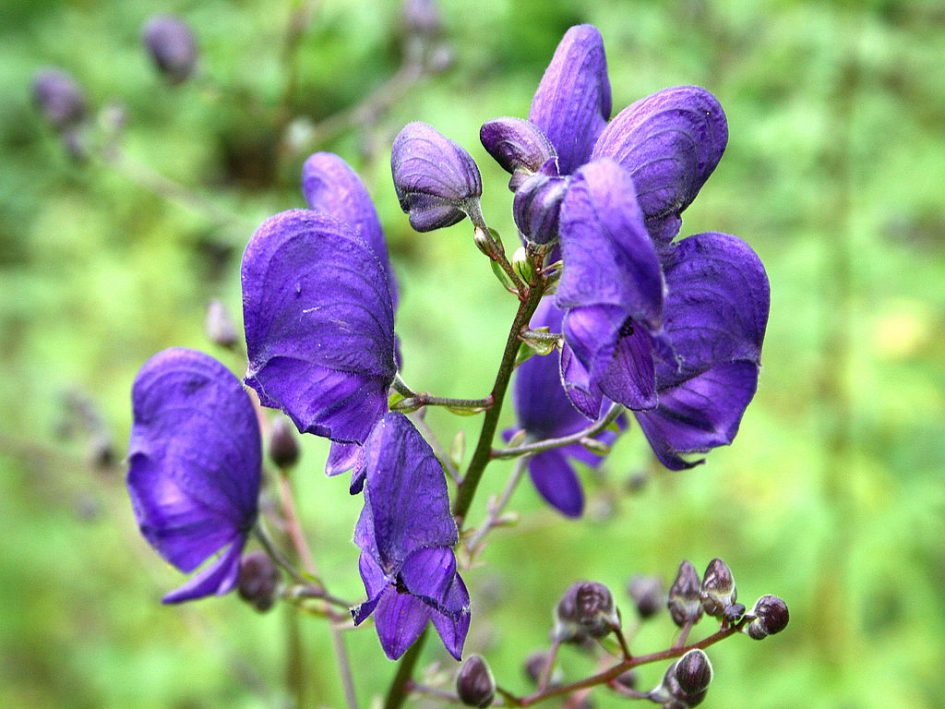 A howl echoes in the distance, we a see a person transform into a gigantic wolf. It approaches, snarling, towards a small, terrified group of humans. One person dares to approach , brandishing a small purple flower, when the flower comes into contact with the wolf’s fur they let out a shriek of pain. END SCENE.

The above story may sound familiar to those who are interested in fantasy or folklore.The plant, Aconitum napellus, or Wolfsbane, is the common known cure or weapon against the fantastical creatures, known as werewolves.Though this isn’t just a mythical plant whose only purpose is to fight those creatures of the night, it also contains many other dark and deadly secrets.

Aconitum napellus can be found in mountains to temperate regions throughout western and central Europe. This plant has leaves that are rounded and it is palmately divided into 5-7 well lobed segments. It has purple flowers that are helmet shaped, from which it gets another name, monkshood.It can grow up to 1 meter or 3 feet tall. There is also a second species of Aconite, Aconitum lycocotonum, that has yellow flowers and is very similar to A. napellus.

Wolfsbane gets it’s name for being the poison used to kill carnivores such as, wolves and panthers, in the 18th century (Aggrawal 2009), it was put into raw meat to bait the animals (Blaisdell 1995). Some believed that it was even aconite that caused rabies in these animals later on because of its horrifying side affects (Blaisdell 1995).  Aconite shows up all across history. In Greece it was thought to have been one of the first poisons ever created, in Rome it was used to poison enemies, it was even used by Shakespeare as a deadly weapon for a aconite covered blade in “Hamlet” (Aggrawal 2009). These are just a few of the gruesome events that took place in aconite’s past. In ancient Chinese culture, aconite, along with other plants, was used to poison arrows (Chakravarty and D. Chakravarti 1954). It was also thought that aconite’s deadly powers were used by  Nazi scientists to poison bullets (Stewart 2009). A plant found in Nepal within the same family is one of the most poisonous plants in the world (Elpel 1998). Aconitum lycoctonum, often had the same uses, as A.napellus, mentioned above (Been 1992).

Why does this plant pack such a bite? 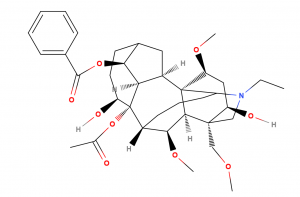 The alkaloid chemical, aconitine, is thought to contribute to the toxicity of the plant (Dr.Duke’s 2016).  Aconitine is the most concentrated in the plant’s roots and seeds (Steger 1972). When consumed, it works by opening up sodium channels that are already sensitive to tetrodotoxins, that increases the influx of sodium through the channels and delays re polarization, causing the victim to become easily excited and more vulnerable to heart failure (Roberts and Wink 1999). The poison further paralyzes the nerves, lowers blood pressure, then gradually stops the heart (Stewart 2009). This poisoning occurs from a large dosage of aconite. A much smaller amount only causes some stomach upset and numbing of the face and mouth. Aconite can even be dangerous when the flowers are touched and if gardening with A.napellus, it is recommended that one wear gloves (Stewart 2009).Though deadly, aconitine is used to relieve aches and pains, a practice in Chinese medicine (Chan et al 1994).In the past it has been used to soothe fevers (Chakravarty and D.Chakravrti 1954).

There is much debate and further amazement about the plant Aconitum napellus. For those excited about this mythical plant, should further investigate its unique abilities and past uses.