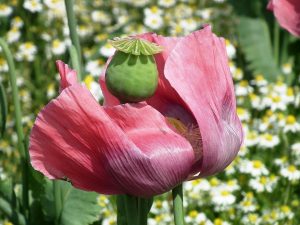 “Purple drank” began its journey 2000 years ago in a place known as Mesopotamia. Mesopotamia is where the Sumerians began civilization and began the cultivation of what they called Hul Gil, the “joy plant,” but we know it as Papaver somniferum the Opium Poppy. Lancing the seed pods produces a toxic latex that can be processed into a euphoria-inducing “smoke-a-bowl” substance called opium. Once the Sumerians learned this, it
wasn’t long until they wanted to share and trade their new-found nirvana. Once this joy plant began its trek down the Silk Road it was virtually unstoppable. Opium traveled effortlessly from its cradle in Mesopotamia to Assyria. Once the Assyrians had fallen in love with opium, a hop and a skip later, opium arrived in Egypt. As more people became enthralled by the effects of opium the demand soared.

Many countries began to cultivate and process their own opium poppies to quench the insurmountable thirst that was rising for the bliss-inducing substance. Opium continued its odyssey along the Silk Road. Its cultivation spread from the Mediterranean through Asia where it is thought to have arrived on the door-steps of the Tang dynasty brought by Arab traders between the years 618 and 907. 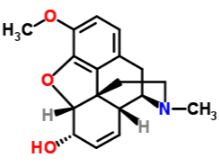 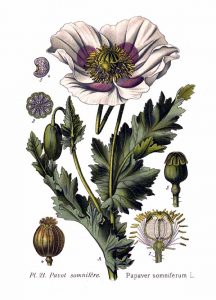 Long before humans walked the Silk Road, the species Papaver somniferum evolved the milky latex that opium is derived from as a defensive mechanism. The Opium Poppy contains a large number of compounds that adds up to one nasty cocktail and has a devastatingly negative effect on herbivores. When the poppy experiences mechanical damage the milky latex substance oozes out to deter would-be attackers. The texture of the substance also destroy
s the mouth parts of insects and has serious toxic consequences when ingested in sufficient amounts. The milky latex from any of the members of the Papaveraceae family will have detrimental effects on the lining of organs. From a survival perspective this is one family that has all the tools necessary for survival. Opium owes the longevity of its relationship with humans to a few pretty remarkable alkaloids. These are morphine, codeine, thebaine,and papaverine. Morphine is the most significant alkaloid in both medical necessity and quantity. Although morphine may be the most important alkaloid, it is not because of the use of morphine itself. While morphine is much higher in quantity than codeine within the opium poppy, it is the ability of the pharmaceutical industry to convert morphine into yet more codeine that makes it such a medical and economic staple.

In 1832 a French chemist by the name of Pierre Robiquet discovered codeine. According to the World Health Organization, codeine is the most commonly and widely used opiate in the world. Codeine has the reputation of being the safest of all the opium-derived alkaloids and is usually administered in seemingly harmless syrup. However, this innocent reputation may be hiding a sinister problem. Codeine is most commonly prescribed to suppress cough and can in some cases even end chronic coughing. This is achieved by codeine’s ability to reduce brain activity in the part of the brain that causes coughing which is kind of scary.

In recent years, codeine has seen some time in the spotlight of pop culture, under the alias “purple drank.” Pop culture has mixed up a cocktail consisting of codeine, cough syrup, alcohol, and soft drink. Many professional athletes have reported to have consumed “Purple drank.” Purple Drank has also made an appearance in many southern rap songs and conversations about its use circle the internet. Codeine continues to maintain the reputation of being the safest of opium-derived alkaloids. However, one cannot be too careful when traveling with this substance for recreational or medicinal purposes for if you’re not vigilant your journey could lead you down a dead-end road.

1. M.D. DAVID I MACHTAB. THE HISTORY OF OPIUM AND SOME OF ITS PREPARATIONS AND ALKALOIDS. Journal of the American Medical Association. 1915 Feb 6. http://jamanetwork.com/journals/jama/article-abstract/439767