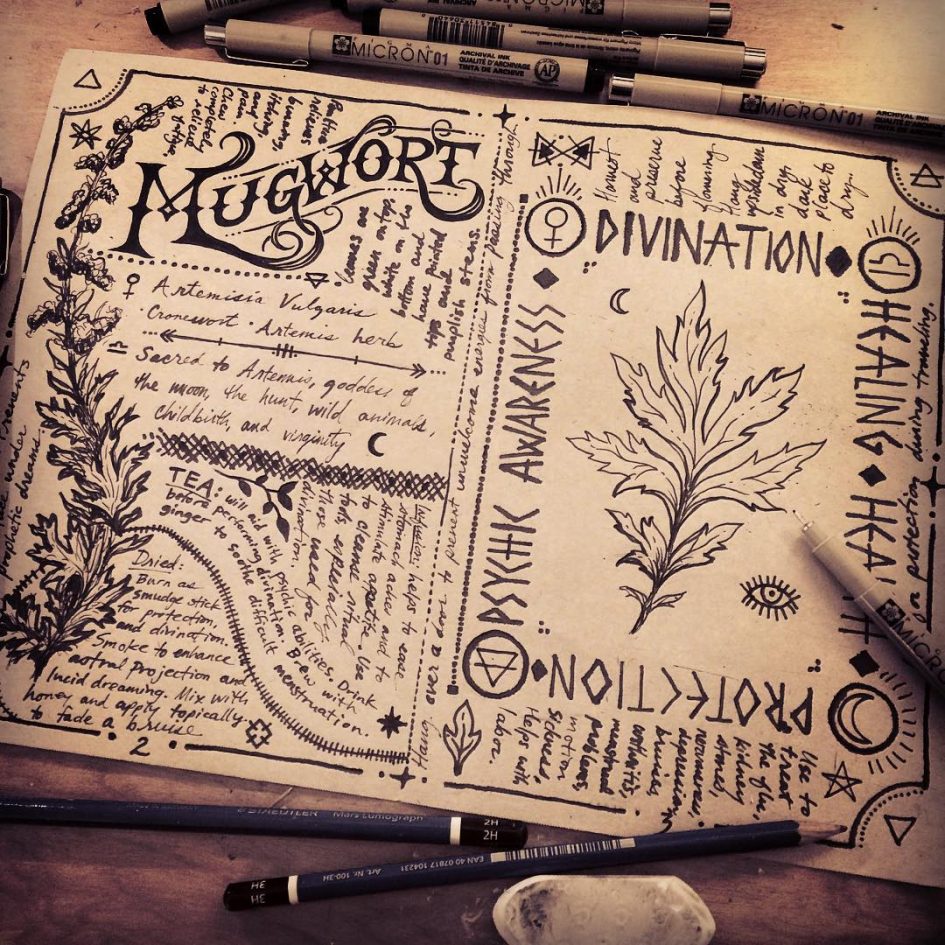 Fight the Patriarchy! In the era of Trump, this magical weed can help women fight the power and take control of their reproductive rights! 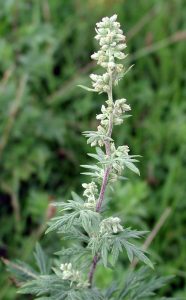 Mugwort (Artemisia vulgaris L.) is a magical plant, considered sacred by cultures across the globe (Casal 1962), and traditionally burned and ingested in rituals for its intoxicating effects (Alberto-Puleo 1978). It is speculated to be one of the first plants cultivated by humans (Armstrong 1944). The genus name Artemisia refers to its association with Artemis the goddess incarnation of Mother Earth, in ancient Greece and the Mediterranean (Alberto-Puleo 1978). 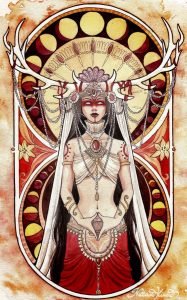 In Japan, Mugwort is believed to belong “to the Goddess of Progeny, Life and Death”, and Ho Hsien Ku the Chinese Artemis, is an eternally young woman clad in Mugwort (Casal 1962). Artemis’ divine presence was considered to be concentrated in Mugwort, and was thus used in the worship and ecstatic union with her throughout the ancient world, via its ingestion during ceremonies held under the full moon in her honor (Alberto-Puleo 1978).

A. vulgaris is a perennial herb with dark green elliptical and deeply lobed leaves (Zheng 2006). The lower surfaces of its leaves are distinctly silvery-white with lightly fuzzy hairs, and it is this silvery feature that may have first connected this plant to the goddess of the moon. 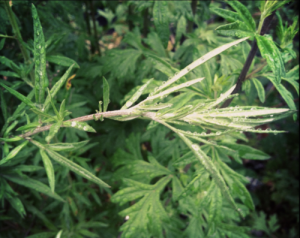 Many weedy and ornamental species have similar mature foliage to A. vulgaris, including common ragweed (Ambrosia artemisiifolia L.) and cultivated chrysanthemums (Chrysanthemum spp.), however the lower surface of both these plants lacks A. vuglaris’ distinctive silvery-white wooly hairs. The complete disk flowers as well as the leaves, stem and stalk are all strongly aromatic. A. vulgaris is wind pollinated, and flowering typically occurs from July to October.

Artemis is both the ancient Greek goddess of Earth and of child- birth. It was commonly thought one of the ways in which Artemis relieved birth pangs was by giving women Mugwort (Alberto-Puleo 1978). A. vulgaris is a plant with a long history of use by women, and was renown in the medieval world as an abortificant and emenagoue with the power to stimulate menstruation during late or missed periods (Van de Walle 1997). 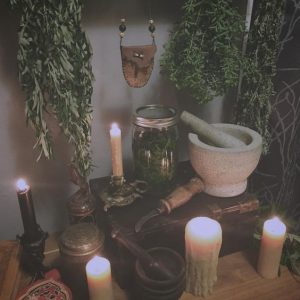 12th century texts extensively describe Mugwort as a menstrual tonic, and one 14th century text discusses Mugwort’s use in expelling dead fetal tissue after a miscarriage. In fact Mugwort has been used by women to covertly and safely abort pregnancies often when it has not been culturally proper to do so. As menstrual irregularity has always been a fact of life, a woman in medieval Europe might miss a period or two without attracting the raised eyebrows of her neighbors. As Mugwort was widely used to stimulate healthy and regular menstruation, its additional ability as an abortificant created an opportunity for women who wanted to covertly terminate a pregnancy (Van de Walle 1997). 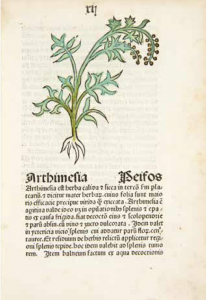 Mugwort allowed women to tread an ambiguous line, giving them the power to choose if and when they wanted to have a child in a time and culture when those decisions were dictated by fathers, husbands and ones place in society. Mugwort has long served as one of the first forms of birth control and a means for women to take control of their reproductive rights!

Pregnant women are warned from taking Mugwort during pregnancy because it contains compounds that stimulate menstruation and kill fetal tissue. Eucalyptol, also known as 1,8-cineole, 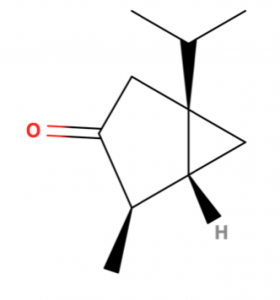 α- and β- thujones stimulate the muscles of the uterus and, when combined with ecalyptol, account for a variety of Mugwort’s effects on the female reproductive system (Alberto-Puleo 1978). As ecalyptol can act both as an analgesic and a sedative/ muscle relaxant (List 1969), when combined with the anesthetic properties of α- thujone, Mugwort can be used as a powerful cure for menstrual cramping (Hold 2000).

Mugwort is an ancient magical herb attributed with the power of arousing “strange ideas, magical conceptions and sacred associations” in cultures across Asia, Europe and North America since mankind’s earliest records (Armstrong 1944). 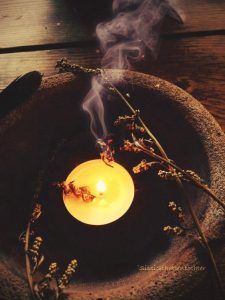 Mugwort has long been used to induce vivid dreams, astral projects, and divinations of the future (Dunwich 37), as it was widely considered to have magical potency. In 17th century England, young women believed digging up its roots and placing it under their beds at night would induce prophetic dreams of their future husbands (Dury 1986). In ancient China, it was often included in sacrifices or used in rituals, for it was believed to be useful in conjuring the presence of divinities (Armstrong 1944). In North America, 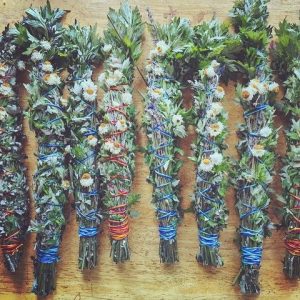 western Mugwort was used by Plain Indians for smudging and prayer, and like in Europe and Asia, as incense during ceremonies. Sometimes it was even used in conjunction with rituals for other hallucinogenic substances such as Peyote (Lophophora williamsii) (Ratsch 2005).

“Referred to in Russian as “zabytko” which means forgetful, Mugwort’s strong camphorlike oils, when inhaled, open up chambers of ancient memory within the brain, bringing one’s dream life stirring visions of past and future that overflow with magical imagery. The symbols which dance through our Mugwort-touched dreams pull out the cobwebs of our forgetfulness and assist us in remembering old, unwritten ways of healing and living that attend to the needs of the spirit and soul”.

Like its abortive properties, Mugwort’s widespread use as a psychoactive substance is due to a variety of terpene compounds like α- and β- thujones (which also stimulate the heart and the central nervous system) (Alberto-Puleo 1978). Three additional terpene compounds are also found in A. vulgaris leaves, and work synergistically with α- and β- thujones to account for Mugwort’s hypnotic and psychedelic effects. 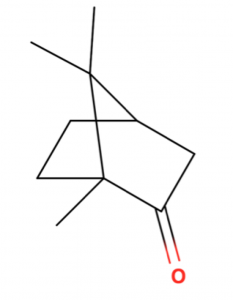 Camphor is a terpenoid that works as a deliriant (Aiello 2016), a class of hallucinogens that even in low doses cause hallucinations that meld seamlessly into waking consciousness, “similar to dreams or delusions”. Deliraints block neurotransmitters from binding to receptors in the brain and central nervous system (Ibogaine University 2014), resulting in stupor, confusion, and confabulation 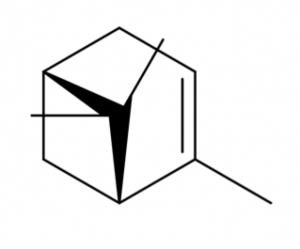 Some behaviors caused by delirants include having conversations with imagined people and interacting with places and situations that are not real. α- pinene acts as a tranquilizer and a sedative (Duke 2000), and works in conjunction with linalool, a terpene alcohol that acts as a hypnotic, motor depressant and sleep-inducting narcotic (Buchbauer 1993, Willionsome 1989). Together these three compounds account for Mugworts association with vivid and often psychedelic dreams, as they simultaneously sedate the user and stimulate

hallucinations. Although these compounds and others like them account for about 50% of the dry weight of the leaf, concentrations of individual compounds, such as camphor, never exceed 15-20% dry weight (Govindarai 2008). Other compounds such as α-thujones or eucalyptol are as low as 5-10% dry weight. This means while the effects of Mugwort remain mild when taken at the right dosage, a higher dosage can induce much stronger effects.

Despite its fame as a friend of women and dreamers everywhere, Mugwort is also a highly medical plant used to cure a number of ailments. Many of the different individual compounds found in Mugwort have overlapping effects, and work synergistically to prevent and cure many of disease (Alberto-Puleo 1978, Casal 1962). Different parts of A. vulgaris are used for a multitude of medicinal purposes including: 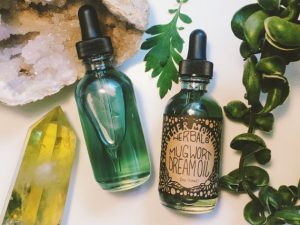 It has been used to cure intestinal parasites, hemorrhages, diarrhea, pneumonia, tuberculosis, ulcers, dysentery, cough, respiratory issues, and prevent vomiting (Barney 2002, Duke 2000, Seol 2016). Camphor, eucalyptol and linalool have all been found to have cancer preventing properties (Duke 2000), and eucalyptol and α- pinene are both antioxidants (Porres-Martinzez 2016, Seol 2016). 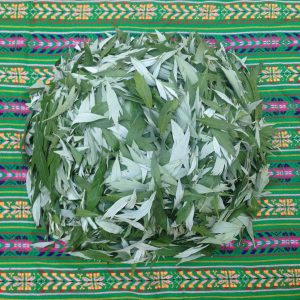 Mugworts all-cure power is reflected in many of the common and unique ways it is used- from being strapped to the feet of travellers for protection and stamina on long journeys, to hung from doorways and eves to ward off evil spirits and disease (Armstrong 1944). As strange as these traditions and many others may seem, they are actually scientifically accounted for by many of the properties in the wealth of compounds found in Mugwort.

Contrary to what many people believe, A.vulargis did not evolve its ability to produce these compounds in order to be used by humans. At least 111 species of insects and mites in 31 families and 7 orders, and 22 species of fungi attack members of the genus Artemisia, while 8 species of fungi specifically target A. vulgaris (Zheng 2006). It is no coincidence that the compounds found in Mugwort that are useful for humans- camphor, eucalyptol, α- and β- thujones, α- pinene, and linalool- are all either strong fungicides, insecticides, or antimicrobial (Duke 2000, Misra 1986). 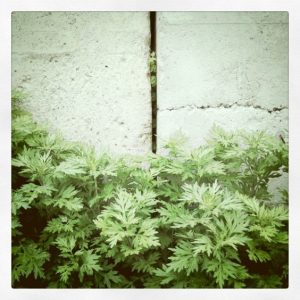 It stores these compounds mainly in its leaves, stalk, branches and roots (Vasylievna Zhigzhitzhapova 2015). But potential predators are not the only ones A.vulgaris is trying to poison. Mugwort is found growing primarily along roadsides, and in disturbed and rocky waste areas (Barney 2002). Today, far from being seen as a sacred plant incarnation of the Earth Goddess, it is considered an invasive weed, and considerable research and resources go into trying to exterminate it. A. vulargis’ aggressive growth is due to its use of Camphor, Eucalyptol, and α-pinene as allelopathic compounds exuded from its roots (Barney 2005). These compounds act as herbicides, concentrating in the soil within and bordering A. vulgaris stands, and reducing or completely inhibiting other plants from growing (Barney 2007). Ultimately, it is Mugworts magical, medicinal and sometimes toxic mix of chemical compounds  compounds that enable it to continue its dominance across the Northern Hemisphere. 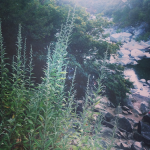 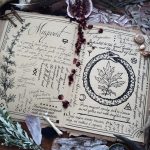 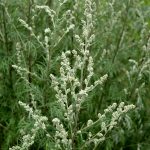 Ratsch, A. (2005). The Encyclopedia of Psychoactive Plants: Ethnopharmacology and Its Applications. Vermont:Inner Traditions/Bear & Company