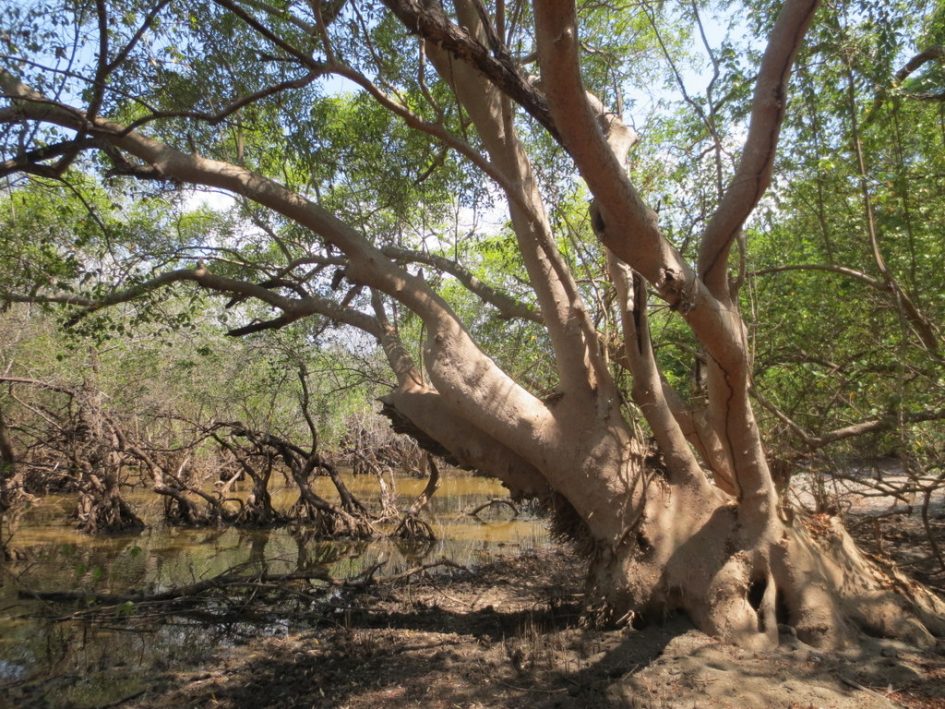 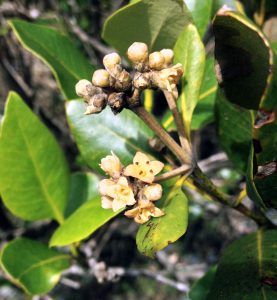 Mangroves aren’t your typical tree. There are only about 50 species or so, and each one is a keystone to the intertidal ecosystem they call home (Wikipedia). Despite the enormous number of animals depending on mangroves for shelter, western culture has seen mangrove forests as wastelands. While they have been used as sources of firewood and folk medicine, perhaps they lack the charisma of Spruce or Douglas Fir to European settlers. Despite this, “mangroves are medicinal plants… widely used… rich in resources of steroids, triterpenes, saponins, tannins, alkaloids and flavonoids” (Namazi 2013).

Keep in mind that European agriculture has long been at odds with biodiversity. As Ivette Perfecto details in Nature’s Matrix, since feudal times, English landowners sought to maximize monetary profits from monocrops on large, rectangular plots of land. For the past 500 years of Colonization, this style of farming has fragmented terrestrial ecosystems worldwide.  In modern times, destruction of the Amazon Rainforest for cattle grazing, for example, is seen by many of Brazil’s poor as the only way to escape poverty. And while this may increase Brazil’s GDP, there are obvious drawbacks.

Today, mangrove forests face a similar dilemma. Countries like Vietnam, eager to recover from decades of imperialism and struggle, are destroying mangroves to make way for shrimp farms much like Amazonian cattle. In American Catch: The Fight for Our Local Seafood, Paul Greenberg explains how a globalized seafood market is hurting mangrove forests, with an emphasis on Vietnam. And these farms are big money makers. So, with the victories and failures of rainforest conservation in the 1990s, what can conservationists learn? How can mangrove forests be used to raise the Global South out of poverty without destabilizing entire ecosystems?

The fruits of a chemist’s labor: 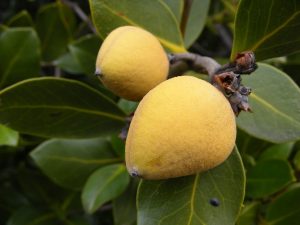 The fruits that contain jacaranones (Image from Wikicommons). 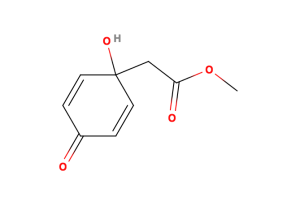 This is the basic structure of jacaranone, a glucosidic ester. It’s a secondary metabolite, found in different forms in the fruit of the mangrove species Avicenna maria. Avicenna is a family of brackish water angiosperms. Avicenna marina is a species of mangrove tree that flourishes throughout the Middle East, Southern Asia, and the south of the United States. Because of its proximity to several emerging economies and such as China, India, Taiwan and Vietnam, it would provide conservationists with great economic power should jacaranone be instrumental in creating novel drugs. 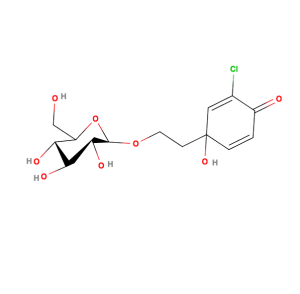 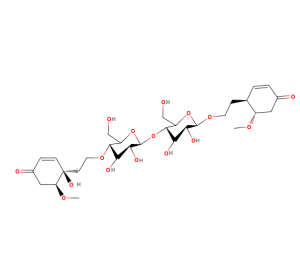 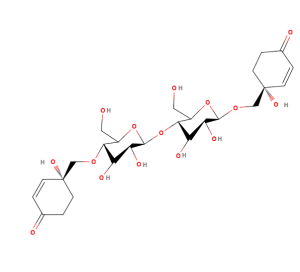 Xiang-Xi Yi et al, researchers at Guangxi University, discovered four new jacaranone “analogs” (molecular variations) in Avicennia maria fruit, as recently as 2014. They were isolated from the berries of the plants, where they serve as an insect neurotoxin in the wild. These new structures were then tested on cellular assays to determine their antioxidant characteristics. NMR, or Nuclear Magnetic Resonance, mapped out these four newly discovered jacaranone analogues, as pictured in figures 2 through 5. These multi-ovular fruits, coming from the small yellow eudicot flowers of A. marina, were essentially just smooshed up in a steel kitchen bowl before being set in containers with methanol to bring the glycoidal esters out of the tissues for NMR analysis.

Turning over a new leaf: 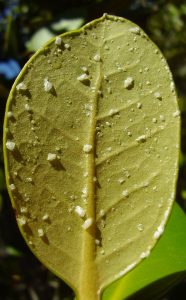 The leaves of Avinnea maria also contain flavanoids with anti-viral properties. Rahele Namazi, et al investigated Persian Folk Medicine use of A. maria on HSV and HIV and found that extracts from the leaves lowered HSV replication within virus assays. While it may not come as a surprise that the use of these alkaloids are now validated by laboratory science, studies like this may pave the way for developing sustainable medical products. Leaf extracts were created using methanol, ethanol, water, chloroforms and n-hexane, which were then analyzed with phytochemical examinations to confirm flavonoid structure of the compounds. A mangrove leaf treatment for herpes might be available soon.

Even more bioactive molecules have been discovered in the plant’s aerial roots. Alkaloid steroid triterpenoids were isolated by researchers from A. marina off the coast of Pakistan in 2011. They found that these alkaloid molecules possessed anti-glycoidal properties. (Mahera et al.)

Symbiosis, all together now:

But the molecules we’ve discovered in the fruits, roots, and leaves of A. marina may well only be the tip of the iceberg. The chemical relationships between A. marina and many of its symbiotic partners might be where the true wealth of bioactive materials are. Marine fungi, found on the roots of A. marina, are being investigated for their bioactive properties by Sherif S. Ebada and Peter Proksch in the South China Sea. Aspergicin, an newly discovered alkaloid, was derived from a mixed culture of “two marine-derived epiphytic Aspergillus fungi”, as well as neoaspegillic acid and kojic acid, two well-known antibacterial compounds (Kim).

We know mangroves, we know. It’s hard to be you.

Mangrove metabolism is thought to be more complicated than other trees in part because of the osmotic stress of brackish water requiring extra energy from the plant. Santini et al. were able to determine that Avicennia marina used fresh water and saline water for different metabolic processes. Growth is strongly correlated with rainfall, yet saline water was still traced through some xylem and phloem, showing that it is used by the plant without a full understanding of how or why.

The hydraulic mechanics of Avicenna marina have only been studied in depth since 2008. Nele Schmitz’s doctoral dissertation, Growing on the Edge, dives deep into the morphology of mangroves. Schmitz details how Avicennia Marina differ from terrestrial trees. While charismatic trees like Spruce have only a single cambria near the bark to carry freshwater, Avicennia Marina have many cambria, with a variety of phylum and xylem to support complex water transportation processes. While all vascular plants invest heavily in water transportation, mangroves are forced to spend even more energy here.

The relationship between Avicennia Marina’s complex water transportation system and how it correlates to different metabolic processes is as of yet not understood or well studied. Here, we reach the frontier of mangrove science. There are plenty of studies about how Avicennia Marina interact with seagrasses or burrowing crabs or numberous other species. But the nuts and bolts of what salinities are used for specific processes offer a plethora of potential doctoral dissertations for years to come. 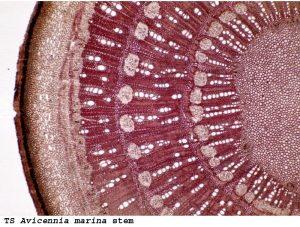 Researchers from Pakistan to China and California are all working hard to tap into the natural product potential of Avicennia marina. This global concern and optimism should be seen as a breath of fresh air for the weary investor. With Wall Street deeply entrenched in weapons, petrochemicals, corporate prisons, ectera, there has never been a better time to abandon common investment trajectories. With countries like Vietnam, Sri Lanka, and Taiwan consistently returning 15% to 25% on foreign investments, the time to become involved is now. Mindful investment in socially responsible biotech startups is imperative to our future.