Mystery of the Dancing Plant: Perhaps the Most Mystical Pea Plant since Jack’s Magic Beanstalk.

The shrub in question is commonly known in Hindi as Dudli.  Some other common names include the dancing plant or telegraph plant. It is native to Southeast Asia. Typically found thriving and jiving in many tropical countries such as Bangladesh, India, Laos, Thailand, Sri Lanka and more (Kalirajan 2012). I first came across it in preparation for a plant chemical ecology class. I started watching the BBC documentary In the Mind of Plants a film by Jacques Mitsch. Watch the first minute of this clip to see the dancing plant in action!

Much like Jack was astonished by the plant that germinated in the fairytale, I was completely intrigued that a bean could grow such a marvelous plant. I was happy to choose this species known as Codariocalyx motorius (formerly also Desmodium gyrans) as a research topic . It seems I’m not the only one captivated by this common shrub. Charles Darwin was enthralled as well; it was included in one of his last books, The Power of Movement in Plants. The Thai botanist in the Youtube allegedly spent a small fortune and 7+ years growing strains. It is used medicinally and is usually listed among the more unusual plants in the world. What has held the fascination of botany and plant physiology communities is not the medicinal properties, the life cycle of the plant or flowering habits. What’s really sending folks on a dance is that Codariocalyx motorius moves when stimulated by sound and we don’t know why!

Aside from reacting to sound the dancing plant also has some other interesting features. The roots, leaves and flowers have been used in Chinese and Southeast Asian medicine for centuries to treat a medley of inflammatory ailments (Kalirajan 2012). Many alkaloids are present in these parts that are used medicinally. Alkaloids are secondary metabolites, plant chemicals that help plants survive in their given environments..The dancing plant is a lovely perennial that matures two to four feet tall and produces purple flowers. Its branches contain large terminal leaves and above them are smaller lateral leaflets. The space below the leaflets are responsible for the rapid movement!

The pea flower of the dancing plant. Image courtesy of Wikimedia Commons.

As I began to delve further into the realm of C. motorius, I found you can order seeds! I jumped on ordering some. Unfortunately my plans and hopes for germinating seeds in time to record my own observations for this blog were unfruitful because shipping took a while. Fortunately no cows were lost during this transaction. I still plan to germinate in the near future and you can try it our yourself from Etsy!

Yes, plants do move. Generally they move to to follow light. They also move to follow gravity such as roots knowing to move downward into moist soil. Some plants also respond to touch. What folks find unusual about the dancing plant is that although it responds to light, temperature, sometimes slight touch, and gravity, it also has movement that is visible to the naked eye when stimulated by sound (Ileperuma 2015). It’s rare in the sense that very few plants have rapid movement. It is also suggested that the reaction to sound could occur to mimic butterfly movement or general winged arthropod mimicry to attract or deter other species (Lev-Yadun 2013).The leaflets of the dancing plant visibly move in an elliptical fashion when exposed to high pitch (high frequency) sound waves (Ellingsurd 1993). This movement can last for up to a few minutes. It is most hypothesized that the movement is to obtain optimum sunlight for the larger leaves. Leaflet movement is controlled by the pulvinus. The pulvinus is the area between the leaflet and the midrib/rhachis (Figure 21.2). The water volume in the motor cells of the puvinus change and cause movement of the attached leaflet (Ellingsurd 1993. Raven 2004)! It is good to note that the plant leaves droop at night or when there is no light. They rise again in the morning. This is common among plants in the Fabaceae/Legume family and are called nyctinastic “night closure” movements. 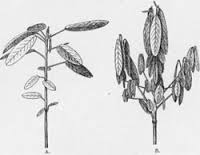 Nyctinastic “night closure” movements of C. motorius. This type of movement is common in plants belonging to the Fabaceae/Legume family.

“People aren’t the only living creatures that love to dance. And we’re not talking about animals. Believe it or not, there is a plant that also enjoys grooving to the beat.” (funflowerfacts.com 2013). These statements about C. motorius are causing the scientific community to roll their eyes. Before general science completely dismisses this jig, perhaps it is important to have some consideration as to why the scientific community is divided on plant neuroscience/intelligence. It seems that many people are more hopeful optimists rather than bringing up supporting evidence and solid facts. Some claim the dancing plant improves its movement with music. This is likely the plant reacting to vibrations of the sound (Ileperuma 2015). In a study with a similar rapidly moving Fabaceae, Mimosa pudica, it was hypothesized plants have an “animal-like” learning behavior. Others claim no, plants only have adaptive behavior. This indicates, to some, that these plants have memory of non-disruptive stimulus in their environment such as a venus fly trap not reacting to raindrops and Mimosa plant not reacting to constant stimulus.“Plants have electrical and chemical signalling systems, may possess memory, and exhibit brainy behavior in the absence of brains.” (The Intelligent Plant). 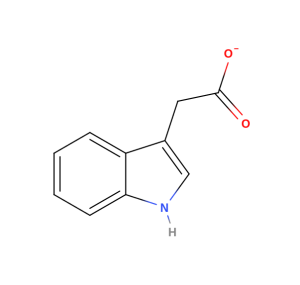 Auxin is involved in the movement of plants. Image constructed on Molview by author.

In the pulvinus, this groove inducing hormone is called auxin. Auxin is derived from the Greek term meaning “to increase”. It is prevalent in many processes in functions of plants. The motor cell transport ions through the watery membrane. These ions diffuse auxin through the cells. This means that auxin is transported by polarity. The volume of the cells in the pulvinus can be changed in a coordinated and reversible way. This polar and non polar activity leads to movements! Depolarization leads to shortening of cels on one side and hyper-polarized leads to elongated cells on the other side of the pulvinus (Ellingsurd 1993. Raven 2004).

So perhaps sound induced movement is to attract someone. Scientists still don’t have answers. Perhaps the plant neuroscience researchers will find a way of having ability to improve sound induced movements in experiments. It seems as if the mystery remains as to why C. motorius reacts with rapid motion to sound.