This website was developed in May 2005 by students of Geography 378 (International Environmental Problems and Policy) at the University of Wisconsin-Eau Claire, to examine the short-term and long-term effects of the Indian Ocean tsunami that devastated coastal regions of South and Southeast Asia on Sunday morning, December 26, 2004. Generally, a tsunami happens when an earthquake generates large seismic waves in an ocean or sea, which can travel great distances. Past tsunamis have previously hit populated regions of the world, but this tsunami hit a densely populated coastal region that was particularly vulnerable to damage. The affected region included Indonesia, Thailand, Sri Lanka, India, and several other countries (including Somalia on the other side of the ocean), where up to 300,000 people were killed and more than 5 million people affected (including 1 million people made homeless).

Our study is in the context of global environmental justice, or the ecological implications of social and economic inequalities between rich and poor countries, and between the rich and poor (or the powerful and the powerless) within countries. Although the earthquake and resulting tsunami were natural phenomena, there was nothing “natural” about the extent of the disaster that followed. The tsunami and its aftermath is a case study of how so-called “natural” disasters can have “unnatural” effects in poorer regions, stemming from manmade social causes such as poor housing and vulnerable subsistence economies. For example, the Pacific Ocean warning system can warn Pacific Rim countries of an approaching tsunami, but the poorer countries of South and Southeast Asia were not able to afford a similarIndian Ocean warning system. Plans are now underway to implement such a system. 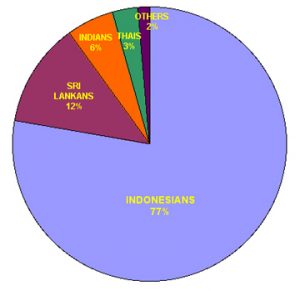 The approaching tsunami was detected in advance by some land-based wildlife, such as elephants, though aquatic life could not escape the destructive waves. Some indigenous peoples used their traditional ecological knowledge to predict and escape the tsunami. But most communities were not so prepared or lucky, and face dire environmental, economic and social consequences in the tsunami’s aftermath.

Most immediately, freshwater supplies were contaminated with seawater, making the population susceptible to diseases. Many fishingvillages and fleets were wiped out, and lost their fisherfolk at sea.Agriculture was devastated not only by the force of the waves, but by the salinization of farm fields and the destruction of transportation links to markets. Coastal wetlands and timber resources were also catastrophically affected, reducing their ability to buffer the coast from future tsunamis. The ability of many coral reefs and low islandsto sustain inhabitants may be particularly in jeopardy. 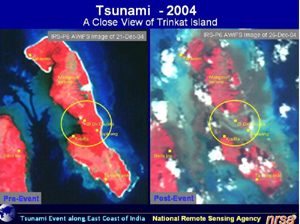 Recovery will come in stages. Since December, the region and the world has supplied relief and aid to the victims, and has begun to undertake the enormous task of clean-up of the damage and debris. An even more gargantuan task will be the long-term reconstruction of the coastal communities, in a way that does not ignore the subsistence needs of small fishers and farmers, or their need for environmentally sustainable development.

An important element of recovery will be to attract new tourism, which has dropped since foreign tourists suffered mass casualties in the tsunami, and the Western media focused much attention on their plight. Another element of recovery may be to use the disaster as an opportunity to settle the wars for independence of the Tamils in Sri Lanka and the Acehnese in Indonesia.

Tsunami recovery is also a test for the rest of the world. As the attention of the U.S. and the world is diverted by other disasters and wars, can it sustain the recovery of the tsunami-devastated region, in a way that narrows rather than increases the gap between rich and poor? 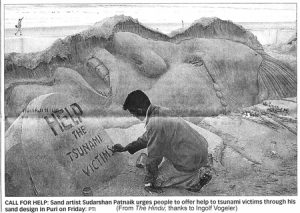