This website was developed in May 2004 by students of Geography 378 (International Environmental Problems and Policy) at the University of Wisconsin-Eau Claire, to examine global issues of water privatization and commodification. Our city is named “Eau Claire,” which is French for “Clear Water.” Our campus sports teams are called the “Blugolds,” reminding us that water is “Blue Gold,” or a natural resource that has become more precious than gold. Freshwater accounts for only 2.4% of the world’s water. Only about 13 percent of freshwater is in liquid form, and nearly all of it is groundwater in underground aquifers.

Two decades ago, it was widely assumed that there were enough freshwater supplies in the world for everyone. Water was viewed as a public natural resource, available to all on the basis of need, as absolutely essential to the survival of life on Earth. Bottled water was considered “yuppie water,” viewed mainly as a status symbol.

Yet today, increased withdrawals of freshwater for industrial, agricultural, and domestic use has created acute water shortages in some areas of the world. Increased pumping has caused both surface water reductions and groundwater drawdown. The resulting “water stress” has severely affected human consumption as well as crops and other natural species. These shortages are stimulating or worsening international conflicts over water, which has joined oil as a major commodity triggering or exacerbating wars. 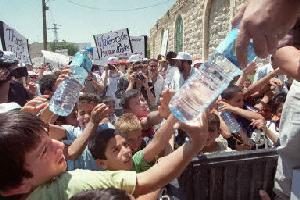 As water shortages and conflicts increase, water is increasingly being transformed into a privately owned resource, and a commodity that can be sold and traded for profit. New international trade agreements and loan policies encourage this privatization and commodification of water resources. Water companies are privatizing public water utilities around the world, and setting prices that cannot be afforded by the poor, triggering conflicts with the multinational corporations. Water bottling companies are pumping groundwater, and selling the water at prices higher than oil. Alarmed by a growing lack of safety in some municipal water supplies, many people are drinking bottled water. Yet many local residents object when companies such as Perrier try to pump out springs or rural wells. 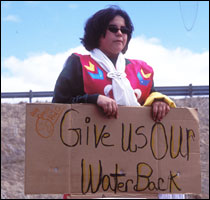 Another controversy centers on the diversion of freshwater from regions with plentiful supplies to semi-arid or desert regions. These bulk water transfers can be carried out through river diversions, pipelines, or even supertankers. The Great Lakes are at especially high risk of these types of diversions, while U.S. water policy allows smaller-scale diversions elsewhere. Water is also captured and used by dams for irrigation or power.

Solutions to the global water crisis are being discussed. There are a number of technical fixes that are too expensive for many countries to afford. All peoples can look toward traditional methods of water harvesting and groundwater replenishment as possible low-technology solutions. Yet no real solutions are possible that do not start with alternate directions in policy that put water back under public, democratic control.

Many thanks to Julia Lehman of Bringing Instruction in Technology to Students (BITS), and our guest speakers Hiroshi and Arlene Kanno of the Concerned Citizens of Newport for their invaluable assistance. (Thanks also to Winona LaDuke, Al Gedicks, and Claire Schmidt for speaking to the class on related issues.)

Thanks to previous Geography 378 students who produced the class websites Caspian Basin Alert (Fall 2002) and Iraq & Our Energy Future (Spring 2003). Thanks also to the U.W. System’s Teaching Technology Today for printing an article describing this Geography 378 project: “Class Websites Contribute to Environmental Awareness.”